The announcement comes a day before the Democratic National Convention is set to begin in Philadelphia, overshadowing former Secretary of State Hillary Clinton's official nomination to lead the Democrats to the White House. 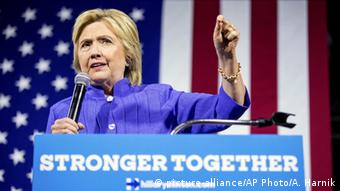 "We have planned a great and unified convention this week and I hope and expect that the [Democratic National Committee] team that has worked so hard to get us to this point will have the strong support of all Democrats in making sure this is the best convention we have ever had," said Wasserman Schultz, a US congresswoman for Florida.

Clinton thanked the head of the Democratic Party's administrative arm for her work. In a statement, Clinton said Wasserman Schultz would serve as a surrogate for her campaign.

"As president, I will need fighters like Debbie in Congress, who are ready on day one to get to work for the American people," Clinton said.

Private emails released by WikiLeaks two days before the start of the Democrats' convention show discord in the party, and reveal tension between nominee Hillary Clinton and her ex-rival.

But Clinton's former rival, US Senator Bernie Sanders, said he was "disappointed" by efforts to undermine his campaign.

Before the congresswoman's resignation, Sanders called for her to step down following the publication of more than 19,000 internal emails from the Democratic party's administrative arm.

The emails showed Democratic National Committee (DNC) strategizing to undermine Sanders' campaign, including questioning whether he is an atheist, despite his Jewish background.