Andrea Nahles has become the first woman to lead Germany's Social Democrats — though by a disappointing margin of votes. She must simultaneously attempt to lead and reform the SPD, Jefferson Chase reports from Wiesbaden. 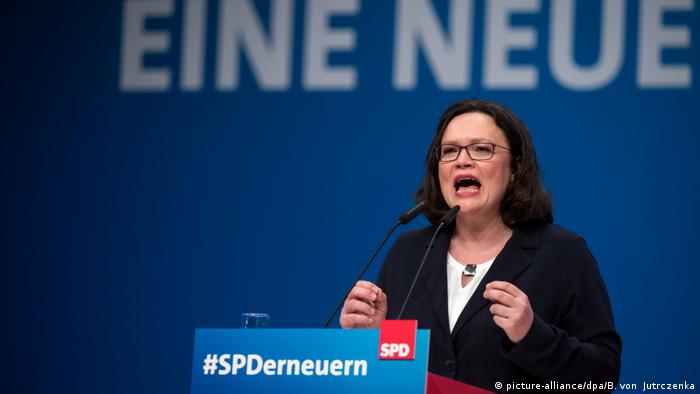 After garnering a meager 66.35 percent of delegate support at a special conference in the western German city of Wiesbaden on Sunday, Andrea Nahles takes over a Social Democratic Party (SPD) in an unprecedented crisis.

Scarcely a year ago, SPD delegates had unanimously elected Martin Schulz, the longtime president of the European Parliament, as party leader and chancellor candidate. The result was a historic national electoral debacle against Angela Merkel's Christian Democrats (CDU), leaving the SPD deeply divided over policy and personnel.

Read more: Opinion: Andrea Nahles must now prove she can reinvent the SPD

After initial refusals, party leaders decided to extend the grand coalition with Merkel's CDU and Bavaria's Christian Social Union, which allies with the chancellor's conservatives. Nahles' job is to remake and re-energize the SPD while ensuring that its Cabinet ministers can do their jobs with minimum interference by fellow Social Democrats.

"You can reform a party while it's in the government — and I intend to prove it starting tomorrow," Nahles told delegates. "But the members of the government need our support. There aren't two parties. We are one party."

The coalition issue alienated major portions of the SPD's rank and file — in particular the party's youth division. By design, Nahles, the labor minister in the previous cabinet, is not a member of Merkel's fourth government. SPD youth leader Kevin Kühnert endorsed Nahles' candidacy, and the majority of delegates hope that the new chairwoman can reunite the party.

"We need a chairwoman who is as hard as steel," one supporter told DW. "We need more young people in the party, but we need to pair that with the experience of a leader like Nahles."

Still, 210 of the 631 delegates voted against Nahles — not at all the ringing endorsement that she had wanted. 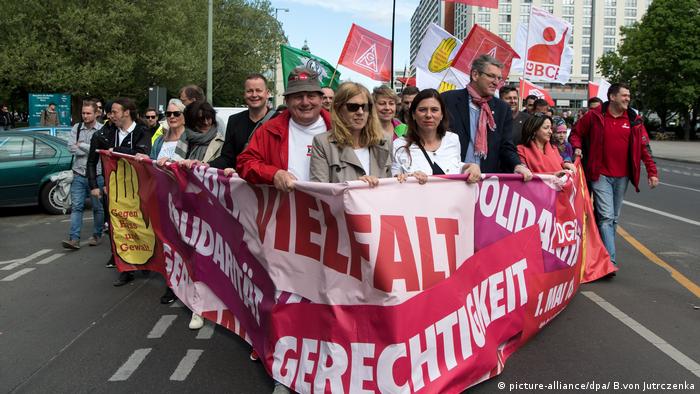 Nahles' toughness is beyond question. The 47-year-old has fought her way to the top of the SPD pile over party heavyweights such as former Foreign Minister Sigmar Gabriel. But she'll have her hands full in her new position.

The SPD barely cracked 20 percent in the 2017 national elections and has sunk to as low as 17 percent in opinion polls. Nahles blamed the SPD's defeat on the fact that the party had failed to tell voters how it intended to achieve its goals.

"In my opinion, there is only one paradigm: solidarity," Nahles told the crowd. "Solidarity is one of the main things missing in this globalized, neoliberal turbocharged world."

Critics might have carped that Nahles said nothing in Wiesbaden that Schulz, whose main campaign theme was social equity, hadn't said in Berlin a year before. In public, at least, Nahles is less an analyst or strategist than a drill sergeant and motivator. Her speeches often come off as harangues — members of the CDU's youth bloc, the Junge Union, handed out earplugs in front of the convention center. 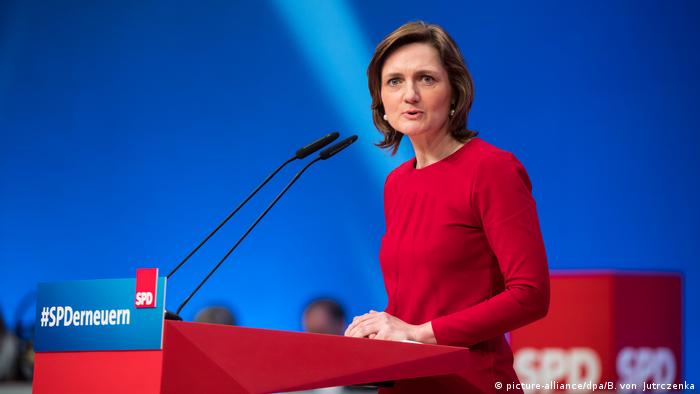 With Simone Lange also putting herself up for consideration to lead the SPD, there was no repeat of Schulz's 100-percent endorsement in 2017. Lange, the relatively unknown mayor of the northern German city of Flensburg, lacks experience at the national political level, but she did profit from the desire of many SPD members for dramatic change in the party leadership.

In her speech, Lange repeatedly invoked the SPD's precipitous decline in public opinion polls and endorsed a return to the traditional emphasis on social welfare. She drew her biggest applause when she called for a re-evaluation of the Agenda 2010, which was enacted from 2003 to 2005 by the SPD's Gerhard Schröder and involved hefty cutbacks to social support.

"We accepted that people live in poverty although they spent their lives working," Lange said. "I would like to apologize to these people."

Though the message resonated with the pacifist wing of the SPD and some younger members, much of the support for Lange, whose speech was somewhat dilettantish and robotic, seemed in reality to be opposition to Nahles and the party leadership.

"(Nahles) always talks down from on high," one younger delegate told DW.

Not enough delegates felt that way to seriously jeopardize Nahles' election. But the fact that 172 delegates voted for Lange showed that a significant segment of the party is not willing to return to business as usual.

Otherwise, reconciliation was the order of the day. There was a standing ovation when acting SPD Chairman Olaf Scholz thanked Schulz for his efforts in last year's German national election. And Schulz himself was allowed to address delegates immediately after the party had elected his permanent replacement — a concession to a former party savior who became the butt of many a joke in political Germany.

Schulz showed the sort of magnanimity that he often lacked in defeat during and immediately after the campaign.

"I left (the SPD's leadership) without any anger or bitterness," Schulz told reporters before the vote. "That wouldn't do any good anyway."

Schulz played a leading role in negotiating the coalition agreement with the conservatives that will serve as the basis for the German government's work for the next four years. In fact, he personally hammered out most of the details of EU policy with Merkel.

Ironically, it is his successor, Nahles, who will likely end up banking most of the credit should the results of those negotiations prove successful and allow the SPD to reverse its decline in favor with voters. But, as the vote in Wiesbaden on Sunday showed, she still has a lot of work to do in uniting the SPD before she can launch a credible appeal to the German electorate as a whole.