Andrea Nahles fires up SPD: People will ′call us insane′ if we don′t attempt coalition | Germany | News and in-depth reporting from Berlin and beyond | DW | 21.01.2018

Andrea Nahles fires up SPD: People will 'call us insane' if we don't attempt coalition

While party head Martin Schulz's star appears to have faded, another of the party's top leaders delivered a speech that may have cinched the "yes" vote and possibly saved the SPD establishment — for now, at least. 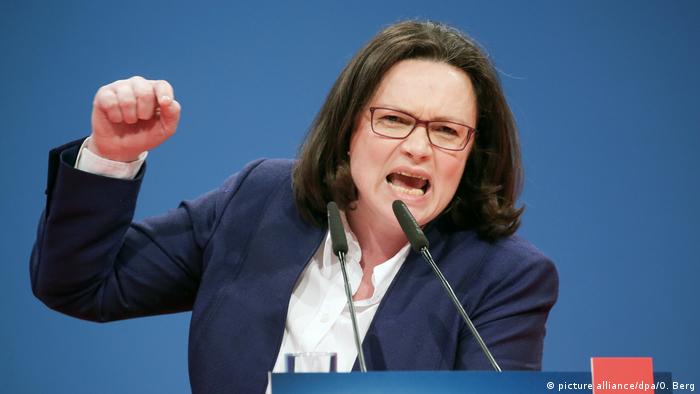 Given the deep divisions among the SPD delegates over the prospect of joining another grand coalition, Martin Schulz's speech was less an appeal for action than a desperate cry for party unity. And it was received as such: tepid applause followed the party head's address. Then a radically anti-coalition speech was delivered by the head of the party's youth wing, Kevin Kühnert.

But then Andrea Nahles stepped up to the lectern. 20 years ago, she led the SPD youth wing, the "Jusos," herself. But that didn't mean she went lightly on them today. Nahles, who heads the SPD parliamentary group, lambasted those who opposed coalition talks for seven whole minutes.

In allusion to the Jusos' leader Kühnert, Nahles posed the rhetorical question what defines a big political achievement. She told of an encounter with an elderly lady at an airport, who had asked Nahles about the SPD position on pensions and then told her "I'm counting on you."

Nahles and her delegation negotiated with Chancellor Angela Merkel's Christian Democratic Union (CDU) and its Bavarian sister party Christian Social Union (CSU) and managed to agree on higher pensions for people who spent many years working. Nahles' voice trembled as she recalled this, saying that basic pensions are a big political achievement. She explained that she'd joined the party because "I have always seen the significance in the little things."

- Opinion: An unhappy ending is a bad beginning

- Germany's coalition talks: What happens next?

- Who is Andrea Nahles, the new SPD leader in parliament?

In the last Merkel cabinet, Nahles served as the Minister for Labor and Social Affairs. During this time, she oversaw the implementation of one of the Social Democrats' biggest projects: the minimum wage. She worked "like crazy" to introduce the minimum wage, Nahles proudly shouted to the Bonn delegates. She said she would pursue similarity important issues in a prospective new government. Like a fairer health care system and refugee regime, and she would fight against fixed-term contracts. "We won't make progress on all issues with the conservatives," she admitted. But that's no wonder, she said, as the SPD is an independent party with a distinct agenda.

She then continued to dissect the skeptics' arguments with visible passion, inadvertently shaking the microphones attached to her lectern. "We're not betraying the SPD by agreeing to govern with the others."

Among other things, many in the youth wing are concerned the SPD will "disintegrate" after yet another grand coalition with the CDU and CSU. Kühnert's camp believes the party will find it easier to embark on a course of renewal in opposition. Nahles has heard this argument before. The SPD did lose voters after twice joining Merkel to form a coalition government. But, Nahles said, in the intermittent four years in opposition the SPD barely regained its strength, climbing "from 23 to just 25 percent." That period in opposition, she insisted, hardly constituted a phase "of major renewal".

She also contextualized the decline of the SPD within the wider European political landscape, arguing that other parties had lost supports regardless of Merkel and the grand coalition.

Her most powerful argument concerned fresh elections, which she identified as the only realistic alternative to forming a new grand coalition. "I don't fear fresh elections but I do fear citizens' questions." She said people would ask why her party hadn't gone ahead and pursued the policies advocated in its party program as part of a coalition government. If her party's explanation was that it was unable to implement all its policies, people would "call us insane." The former Juso leader and ex-idealist struck a decidedly pragmatic tone, pointing out that fresh elections weren't an alternative because the party would not win an absolute majority. And that a left-wing coalition uniting the SPD, the Left party and the Greens wasn't either, as surveys showed they together still lacked 10 percent of voter support to govern. So to her, going for fresh elections was simply "nonsense!"

She concluded her speech by promising to be a tough negotiator in talks with the conservatives. Which resonated with the Bonn delegates who responded ecstatically. A reaction that neither SPD party leader Martin Schulz, nor any other party member manged to evoke. After the conference, delegates and political observers agreed that Nahles' speech struck the right tone at the right time, essentially saving the entire party leadership, and Schulz in particular.

Nahles: CDU must put aside last round of failed talks