The man who supplied a gun to the National Socialist Underground terrorist group has been set free on bail, having served two-thirds of a 10-year sentence. The German neo-Nazi scene had campaigned for his release. 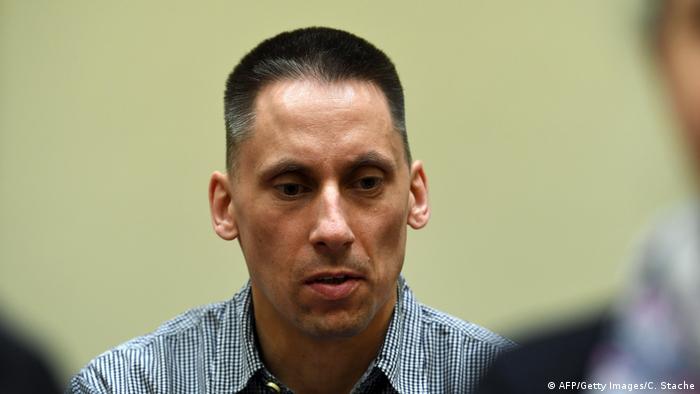 A German court on Wednesday deemed that Ralf Wohlleben, the man who supplied a neo-Nazi terrorist cell with the gun that was used to murder nine people, had served enough of his 10-year prison sentence before his conviction last week.

The 43-year-old, who was freed on bail, was found guilty of being an accessory to murder and supporting the National Socialist Underground (NSU), a neo-Nazi group that committed a decade-long killing and bombing spree that resulted in one of the most complex, and most important, trials in reunified German history.

The Munich court decided that Wohlleben, who has spent six years and eight months in detention since his arrest in November 2011, no longer had enough temptation to flee while his appeal is pending, because he only has a maximum of three years and four months left to serve. The federal state prosecutor agreed with the ruling, the court said in its statement.

The result means that only one of the five people convicted in the NSU trial last week remains in prison: the main defendant Beate Zschäpe, the NSU member who was convicted of 10 counts of murder and membership in a terrorist organization and sentenced to life in prison. The other three accomplices, Andre E., Holger G. and Carsten S., who received lesser sentences, were also released on bail pending appeal.

Read more: German authorities' many failures in investigating the NSU

A terrorist accomplice and politician

Wohlleben was a major part of the five-year trial, and considered one of the key perpetrators by the state. He supplied the Ceska handgun with which the NSU members Uwe Böhnhardt and Uwe Mundlos murdered nine people of immigrant background between 2000 and 2006. Prosecutors argued that he knew what the gun would be used for.

Prosecutors also said Wohlleben, who had formerly been a deputy leader of the far-right National Democratic Party (NPD) in his home state of Thuringia, had taken on "central control" of the group's organization after the NSU went underground. Wohlleben will now at least be free for several years while his appeal is being considered, and may well be freed forever.

The relatives of the NSU's victims expressed disappointment with the decision on Wednesday, though it had been expected. Gamze Kubasik, daughter of Mehmet Kubasik, who was shot dead in Dortmund in 2006, told the news agency AFP that the decision was "bitter."

Rule of law in Germany?

Many of the relatives of NSU victims had already voiced their anger at the sentences handed down to Zschäpe's accomplices last week. Abdulkerim Simsek, whose father Enver was shot dead by the NSU in 2000, told DW after the verdict that the fact they were all being released had shaken his belief in the rule of law in Germany.

"The helpers simply got away very well, and I can't understand it," he said. "Germany should have sent out a signal. Especially Bavaria, Bavaria is notorious for its tough sentences. And in all them they remained below what the state prosecutors asked for."

Mehmet Daimagüler, the attorney who represented Abdulkerim Simsek and other relatives as co-plaintiffs in the trial, also described his disappointment. "The man was involved in the murder of nine people," he told DW. "The court says that this crime can be atoned for in 10 years, which I think is completely inappropriate. My clients are absolutely horrified, and will need some time to digest it."

"If the conviction and sentence is confirmed by the federal court, then I don't think he'll have to go back to prison," he added. "Almost two-thirds of his sentence has already been served, and usually people are freed after that time. We can't do anything about it — co-plaintiffs can only appeal if they want a different conviction. This was a good day for Nazis."

That sentiment was backed up by the response to the trial in the neo-Nazi scene. Several neo-Nazis cheered in the courtroom while the sentences were being read (and the judge failed to intervene), and a "Freedom for Wohlleben" campaign has been running in the far-right scene for several years. "He is a hero in the scene," Stephan Kramer, president of the domestic intelligence agency in the state of Thuringia, told the RND media network. "But we will keep a special eye on him."