Neo-Nazi attacks on the rise in western Germany | Germany | News and in-depth reporting from Berlin and beyond | DW | 23.04.2012

Since reunification, the prevailing view has been that right-wing extremism is mainly restricted to eastern Germany. But now the number of neo-Nazi offenses is soaring in the west. A new trend? DW takes a look. 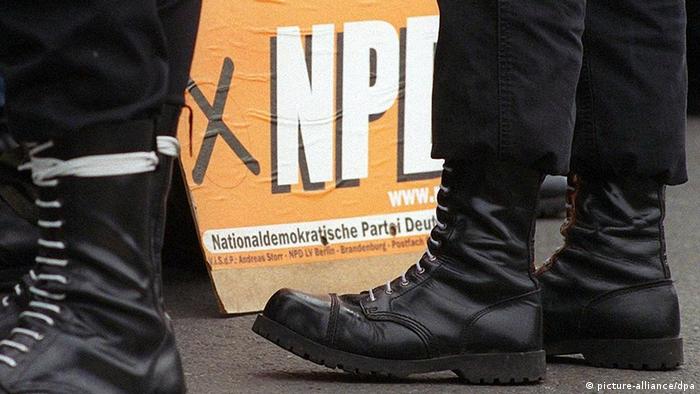 Scenes from near Nuremberg in Bavaria: Right-wing extremists threaten some young Kurds, shouting, "Get out you damned Turks!" Then several neo-Nazis attack the group, brutally beating up the migrants. One young man sustains severe injuries, falls into a coma and only barely survives.

On a different occasion some youths hold a vigil for the victims of right-wing extremism. They hold up banners saying "Fascism - never again." Suddenly they are bombarded with fireworks by a group of masked people. Later the youth center is daubed with swastikas and the threat: "We will get you all!" 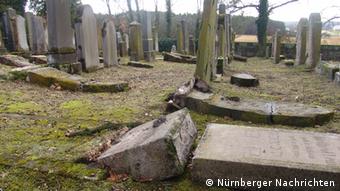 During another incident in the same region the windows of a car parked outside a house are smashed during the night. Butyric acid is also poured through the letter box into the hallway of a house. "The smell was so bad that for days my family and I almost vomited every time we stepped into the hall," recounts Michael Helmbrecht from Nuremberg. After the attack Helmbrecht, who supports an alliance against right-wing extremism, found a statement on the website of a regional right-wing extremist group which said he had now experienced his very own "Kristallnacht" - a cynical reference to the nationwide 1938 Nazi pogrom targeting Germany's Jewish population, synagogues and shops. 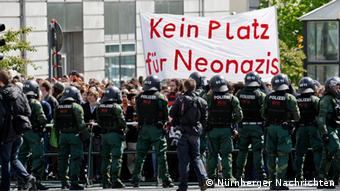 A street protest against neo-Nazis in Weißenberg

Herbert Fuehr, an editor with the "Nürnberger Nachrichten" newspaper, says there were over 50 attacks on people and property from November 2011 until April 2012. Fuehr reports critically on right-wing extremist terror which has led to his picture being published on neo-Nazi websites and him being denounced as a troublemaker. It's dangerous to be singled out by the neo-Nazi scene, Fuehr says, adding that he hopes the perpetrators will refrain from publishing his personal address on the Internet.

These incidents are not just restricted to Bavaria. "It's getting worse, more brutal and increasingly public," says Michael Helmstedt of the alliance against right-wing extremism, adding that similar attacks have taken place in other parts of western Germany. 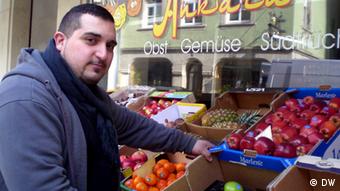 Vegetable dealer Murat outside his shop in Weißenburg

Germany's Federal Office for the Protection of the Constitution puts the number of right-wing extremist offenses at several hundred in the area of Nuremberg alone. Many of the perpetrators aren't even trying to keep a low profile. Michael Helmbrecht and his family were harassed for three days by 250 neo-Nazis who had taken up position on a lawn they had deliberately rented close to his house. The family received comprehensive police protection, and friends moved in with them in a show of solidarity.

The fear of attacks is mounting, for instance in Weißenburg in Bavaria, where a growing number of neo-Nazis are moving to from larger cities. A few weeks ago a right-wing extremist group openly paraded through the streets of Weißenburg. Subsequently the office windows of democratic parties were smashed, and foreign looking people were attacked with knives. Murat, a vegetable dealer of Turkish origin, told DW that he is worried: "Experiencing this is not nice. One doesn't even feel like a second-class human being any more, it's more like third class."

The perpetrators are seldom found. Many citizens turn a blind eye to the neo-Nazi attacks because they are afraid to end up on the target list themselves. Although the police are trying hard to pinpoint the perpetrators, many victims feel left in the lurch by the state. 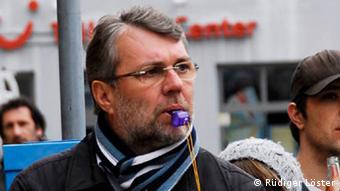 Michael Helmbrecht and Doris Groß from Nuremberg's office for human rights both say the police have been boosting their efforts to track down neo-Nazi offenders following the disturbing revelations over a string of neo-Nazi murders targeting migrants from Greece and Turkey as a well as a female police officer.

In his capacity as mayor of Weißenburg, Jürgen Schröppel defends the administration of many towns that are forced to grant neo-Nazis freedom of assembly, which is guaranteed by the country's constitution. "Of course the first reaction is that we must stop these marches," admits Schröppel. However, being a former judge he is also a staunch supporter of the freedom of speech. "A democracy must also be able to bear extremist forces." Schröppel responded to the neo-Nazi activity in his town by organizing a counter-demonstration together with alliances against right-wing extremists.

Standing up to neo-Nazis

Citizens who actively resist right-wing extremism say it is crucial to act quickly and publicly. For instance in Regensburg owners of restaurants, pubs and hotels have implemented an initiative to prevent neo-Nazi meetings. Martin Seitel of the Kolpinghaus Regensburg is unable to check up on the political inclinations of all his guests, but if he comes across a group that he's suspicious of, he makes his own position clear by putting up picture with people holding a banner that reads: “Foreigners are my friends.” 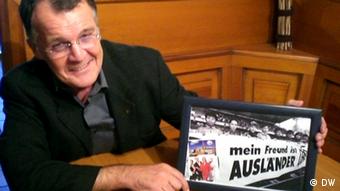 "It's important to take a stand and make absolutely clear that xenophobia will not be tolerated," says Seitel.

Another initiative in Regensburg goes a step further. Some pubs and restaurants are displaying stickers saying: "Racists won't be served here." All participating landlords are strictly following this line, expelling neo-Nazis and rejecting bookings of suspicious groups.

The idea initially came from students. To begin with, they were skeptical whether enough people would subscribe to it, and they were surprised that in the end over 140 landlords put the stickers on their doors. "It's a pity though that it's mainly left-wing activists or politically organized groups who have the courage to stand up to neo-Nazis," says the Turkish vegetable dealer in Weißenburg.

"Unfortunately the greater part of the population is still looking on and keeping quiet."

Parents fear their children drifting to the far right

Swastikas and far-right music in the bedroom, hate-speech against minorities - a child who drifts into the far-right scene is a nightmare for many parents. (23.03.2012)

German authorities have struggled to ban the far-right National Democratic Party. But new efforts by the ruling Christian Democratic Union - and a possible link to a series of murders - have reignited debate about a ban. (16.03.2012)

Barbara John, representing the families of the victims of neo-Nazi terrorism, has said more must be done to help those who lost loved ones. Among other recommendations, she called for better training for German police. (09.03.2012)