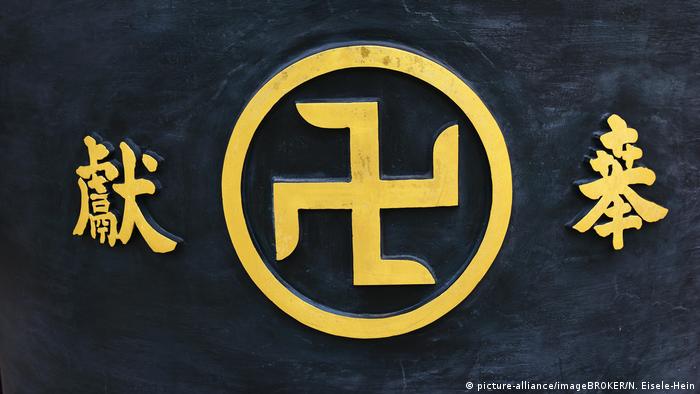 The Los Angeles-based Simon Wiesenthal Center has condemned reports that the owner of one of Tokyo's most famous tourist attractions and hundreds of other businesses in Japan threw a Nazi-themed party for his employees.

Reports about the event have just emerged in Japanese tabloid media, along with images from the party, even though it took place in October 2017. An official of The Simon Wiesenthal Center said that the delay is worrying in itself as none of the thousands of people who would have been involved in organizing the event or were in attendance thought to reveal what had happened.

And given a series of similar incidents in Japan in recent years that appeared to glorify elements of Nazism, Abraham Cooper, associate dean of the center, told DW that he was "not particularly shocked" at this latest case.

Local media have reported that Keiichi Morishita, the 69-year-old founder and chairman of the Morishita Group, presided over a party on a beach in Chiba Prefecture, east of Tokyo, for his employees. Attempts to obtain a comment from the company about the event were not successful.

Morishita started out in business in Tokyo's Kabukicho red-light district in the early 1980s and quickly expanded into bars, hostess clubs and other similar establishments. He owns Manboo, one of Japan's largest internet café chains, and is behind the Robot Restaurant, which is hugely popular with foreign tourists.

The company throws a themed party for staff every autumn, with the weekly news magazine Flash publishing images of the 2017 event in its most recent edition. The photos show banners and flags depicting the swastika and dozens of young women in skimpy uniforms that include peaked caps and long leather boots.

Company insiders told the magazine that a papier-mache tank and a replica of a Stuka dive bomber had also been constructed as part of the decorations.

A message on The Simon Wiesenthal Center's Twitter account stated, "Whatever the circumstances, however powerful the individual, celebrating (the) ultimate symbol of racism, anti-Semitism and genocide is an outrage. Ignorance (or) admiration of ultimate evil? Whatever reason, it slanders memory of Nazism's victims, including 6 million Jews."

Rabbi Cooper said he was "extremely disappointed" by the news.

"In this case, it appears to me that the persons behind this event consider themselves to be close to untouchable and that they can therefore flaunt that," he said. "If anyone finds out, they don't care, and that includes glorifying Nazism in a parade.

"Even more worrying is that many people must have been involved in this undertaking — from designers and builders to caterers — but it is only coming out now, so the issue runs much deeper," he said. "That is troubling."

There have been a number of previous cases in which the Japanese have displayed paraphernalia that could be considered as glorifying Nazism and that are outlawed in other parts of the world.

A Japanese man who declines to give his name attends the annual memorial ceremony at Tokyo's Yasukuni Shrine to mark Japan's surrender at the end of World War II in the uniform of a Nazi German soldier and with placards lionizing some of Nazi Germany's top panzer commanders.

At a Halloween event in 2016, an all-girl pop group called Keyakizaka46 made headlines around the world after they took to the stage in uniforms reminiscent of those worn by SS troops. Sony Music, the label behind the band, issued a statement on its site to apologize, saying, "We express our heartfelt apology for causing offense … because of our lack of understanding."

In 2008, a member of another Japanese pop group nominated Adolf Hitler as a "great person" on a television program and described him as "Uncle Hitler."

Japanese academics suggest that the problem is more of a lack of comprehension of history in general and the atrocities of the Nazi era in Europe more specifically.

"I think the biggest issue is the ignorance among young people about Nazi Germany and the issue of the Jews before and during the war," Hiromi Murakami, a professor of political science at the Tokyo campus of Temple University, told DW.

"It's a little distant from the mindset of many Japanese people, whereas in Europe what happened is constantly visible and a reminder," she added. "To far too many people, they see clothing or designs from that time and they think it's 'cool' — so it's a lack of education and understanding."

Yoichi Shimada, a professor of international relations at Fukui Prefectural University, agrees that some Japanese are taken in by Nazi symbols, but he insists they are in a small minority.

"Almost all Japanese are very aware about the behavior of the Nazis in Europe and those that do not are stupid because they have had the chance to learn," he told DW. "But I fear that every country has its share of people like that."

Diplomat Chiune Sugihara gave visas to thousands of Jewish refugees after Nazi Germany and the Soviet Union invaded Poland in 1939. Japanese Prime Minister Shinzo Abe said he was "really very proud of him."

After seemingly praising Nazi dictator Adolf Hitler, Japan's deputy prime minister, Taro Aso, retracted his comments and said they were "inappropriate." Aso has made other Nazi-related gaffes in the past.