An Israeli witness who survived the Nazi death camp at Stutthof has described how SS guards staged sadistic "shows" to torture prisoners. His testimony is part of a court case against a 93-year-old former guard. Holocaust survivor Abraham Koryski gave evidence in court on Monday, detailing the horrors he and other inmates endured at the Stutthoff concentration camp in the final years of World War II.

"We were beaten constantly, the whole time, even while working," Koryski told the Hamburg District Court. "Worst of all were the whips."

The 92-year-old Israeli citizen traveled to Germany to give evidence in the trial of Bruno D., a former SS private accused of 5,230 counts of being an accessory to murder at Stutthof from 1944 to 1945.

Speaking through an interpreter, Koryski said he had seen SS guards put on sadistic "shows" to torture prisoners, including one instance in which a son was forced to beat his father to death in front of other inmates.

"You didn't know if the officers were acting on orders, or if they did it on their breaks," he said.

Koryski told the court it "was no secret" that people were being killed in the camp's gas chamber before being burned, because of the smell that spread through the barracks. He added that his "work" had involved cleaning the crematorium, which meant loading bones and other burnt remains onto a cart to be thrown into a trench. 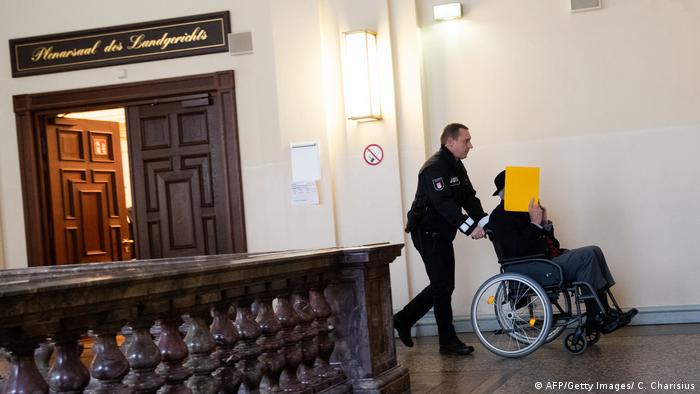 Former SS guard Bruno D. leaves court in a wheelchair after a hearing on November 12

Koryski was taken from Lithuania to Stutthof in 1944, when he was 16 years old. In early 1945 he survived a "death march" to the west after being freed by the Red Army.

Although Bruno D. is 93, he is being tried in a juvenile court because he was 17 in August 1944 when he started working as a guard at Stutthof, set up by the Nazis in the territory of the former Free City of Danzig, now known as Gdansk and part of modern Poland.

Though there is no evidence linking him to a specific killing, prosecutors argue that as a guard he helped the camp function and "supported the insidious and cruel killing of mainly Jewish prisoners."

If convicted, he faces a possible six months to 10 years in prison.

Germany's Nazi past still haunts the country today. A former SS guard at a concentration camp, charged with aiding and abetting hundreds of murders, is standing trial in Münster's district court. (06.11.2018)

The man is accused of being complicit in the deaths of 5,230 inmates during a period of almost a year working as a guard at the Stutthof concentration camp. The trial is set to begin in October. (08.08.2019)

One of the last trials against an ex-concentration camp guard began Thursday in Hamburg. The 93-year-old faces 5,230 counts of accessory to murder. Prosecutors say he was a "cog" in Nazi Germany's "murderous machinery." (17.10.2019)