Navalny ally Leonid Volkov: 'Our aim is to outsmart Putin' 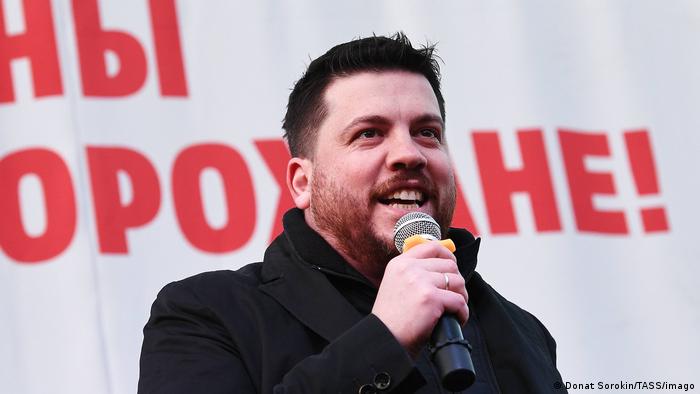 With opposition leader Alexei Navalny in custody, his associates have been stepping in to organize protests across Russia to maintain pressure on the Kremlin. Leonid Volkov, a close ally to Navalny, toold DW's Russian service that the protest movement's strategy is to improvise in order to be flexible and "outsmart Putin."

"I don't want to and can't say anything specific about the format. It will always be something new, something different," Volkov said.

Navalny ally Volkov: 'Our strategy is to be flexible and to be smart'

Volkov was instrumental in organizing Valentine's Day protests by calling for the demonstrations on Twitter.

Supporters of Navalny held candle-lit minidemonstrations in residential courtyards across Russia on Sunday evening. Protesters used a new method of demonstrating by using the flashlight function on their smartphones and arranging candles in the shape of a heart. The action took place under the motto "Love is stronger than fear."

"Be sure to tell your stories after the action: How did you decide to get out? Were you the first in your yard or did you join someone? Have you met new like-minded people? These stories are perhaps even more important than the flashlight encounters themselves," he tweeted.

Volkov said protesters' strategy was to ramp up pressure on Putin and to grow the number of supporters. He added that leaders want to "help supporters to organize themselves and not yield to Putin's strategy of fear and smear campaign."

"So far we have been very successful and I think will remain quite successful in the future," Volkov said.

Navalny was arrested last month upon his return from Germany, where he was being treated for poisoning with the nerve agent Novichok. He was jailed on February 2 for violating the conditions of a 2014 suspended sentence.

His arrest and subsequent imprisonment has spurred weeks of nationwide protests resulting in the arrests of thousands of demonstrators.