NATO has told Russia to "stop massing" its troops on Ukraine's border and open a "genuine dialogue." Kyiv meanwhile has offered amnesties to pro-Russian occupiers of buildings in eastern Ukraine. 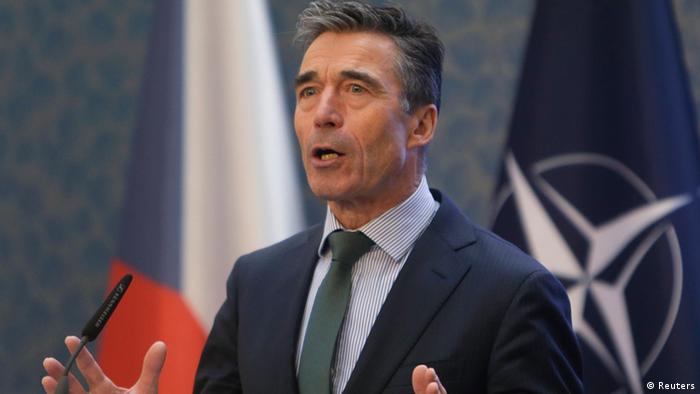 Visiting the Czech capital, Prague, Rasmussen (pictured) told a news conference that if Russia was serious about a dialogue then the "first step should be to pull back its troops."

"We have seen the satellite images day after day. Russia is stirring up ethnic tensions in eastern Ukraine and provoking unrest," Rasmussen said, warning that Russian military entry into eastern Ukraine would lead to hard economic sanctions and isolation.

He also accused Russia of using its military might to "dictate" what Ukraine should become, adding that this was "a decision which only Ukraine as a sovereign state can make," he added.

In a parallel move on Thursday, Ukraine's acting President Oleksander Turchinov said Kyiv was offering amnesties to pro-Russian occupiers, if they vacated administrative buildings they have occupied since Sunday in Donetsk and Luhansk to back demands for referendums on joining Russia. 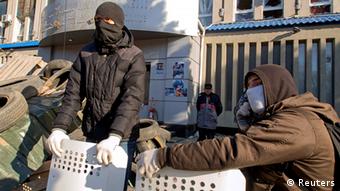 "If people lay down their arms and free the administration buildings, we guarantee that we will not launch any criminal proceedings," Turchinov told parliament in Kyiv.

This followed a warning issued by Ukrainian Interior Minister Arsen Avakov, who said that the standoffs in both cities must be resolved within two days.

The Russian Foreign Ministry claimed early on Thursday that the 28-nation Western alliance was using the crisis in Ukraine to "rally its ranks in the face of an imaginary external threat to NATO members."

Late on Wednesday, NATO's top commander in Europe, US Air Force General Philip Breedlove said he would next week present NATO ministers with a "package of land, air and maritime measures that would build assurances for our easternmost allies."

Estonia and Romania are among the NATO members closest to the crisis region.

Everything NATO was preparing was completely "defensive in nature," Breedlove said.

The US assistant secretary of state for European affairs, Victoria Nuland said Washington regarded four-way talks due next week - to include Russia, Ukraine, Europe and the US - as "very important."

She went on to warn Russian President Putin that "NATO territory is inviolable."