US General Philip Breedlove, NATO's top military chief has warned that Russia still has enough troops on Ukraine's border to carry out an incursion across the region. Moscow has also deployed 14 military jets to Crimea. 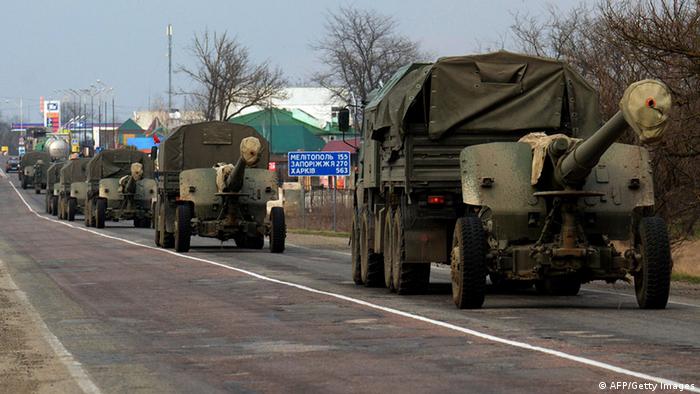 NATO's top military commander, US General Philip Breedlove, warned on Wednesday that Russia could use its "militarization" of the annexed Crimea region to exert control across the whole Black Sea region and is providing the "backbone" to separatist rebels fighting government forces.

"We are very concerned with the militarization of Crimea," Breedlove told a press conference in Kiev, where he was holding talks with Ukraine's leaders. "The capabilities that are being installed in Crimea will bring an effect on almost the entire Black Sea," he added.

The commander of American forces in Europe, said that cruise and surface-to-air missiles on the peninsula, which Russia seized from Ukraine in March, could be used to "exert influence" over the strategic region.

Amid ongoing fears that Russia could potentially move any of its nuclear arsenal to Crimea, Breedlove added, that the alliance was "watching for indications."

Also on Wednesday, Russia's defense ministry said that it had deployed 14 military jets to Crimea, as part of a fleet of 30 aircraft that will be stationed on the peninsula.

Since Russia annexed the Crimean region from Ukraine in March over 4,300 lives have been lost and relations between Moscow and the West have reached their lowest since the Cold War. Russia, however, has continued to deny playing any role in the conflict.

Each day an average of three people have joined Estonia's national guard this year. Estonians worry Russia could one day turn its aggression on them, and they want to be ready. Isabelle de Pommereau reports from Tallinn. (26.11.2014)

Russian officials have become more outspoken as to what extent Western sanctions and the steady decline in the price of oil are having on the national economy. Capital outflows were also on the Kremlin's radar. (24.11.2014)