NATO has announced the expulsion of seven Russian employees from Moscow's observer mission to the organization. The Kremlin has said it is the target of Western "blackmail" over the poisoning of ex-spy Sergei Skripal. 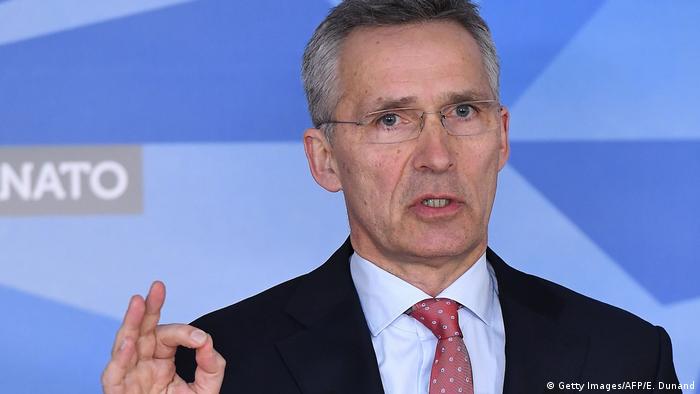 The head of the North Atlantic Treaty Organization (NATO), Jens Stoltenberg, announced on Tuesday that the intergovernmental military alliance would be expelling seven observers from the Russian mission over the poisoning of ex-double agent Sergei Skripal and his daughter in the UK. Stoltenberg's statement followed the earlier dismissal of more than 140 Russian diplomats from 24 different countries.

"I have today withdrawn the accreditation of seven staff of the Russian mission to NATO. I will also deny the pending accreditation request for three others," Stoltenberg told a press conference in Brussels. "This will send a clear message to Russia that there are costs and consequences for their unacceptable pattern of behavior."

Stoltenberg said that Russia had exhibited a pattern of disregarding the sovereignty of other nations, going back to the illegal annexation of Ukraine's region of the Crimea in 2014.

On Monday, the US, Germany, Canada and a number of other nations expelled a score of Moscow diplomats, a move Russian Foreign Minister Sergey Lavrov described as "blackmail."

"We know for certain that this is a result of colossal pressure and colossal blackmail, which is Washington's chief instrument in the international scene," said Lavrov.

The UK became the first western country to expel Russian diplomats last week over the March 4 poisoning in Salisbury in the west of England. Many of the countries to follow suit on Monday said they did so out of solidarity with the British government.

Skripal, who was freed from Russian custody in 2010 in a "spy swap" with the US, was found nearly comatose on a bench, as was his daughter Yulia. More than 130 people are suspected of having been exposed to the nerve agent used in the attack, a military-grade chemical weapon known as Novichok, which was developed in the Soviet Union in the 1970s.

Despite this, the Kremlin has consistently denied having a hand in the attack, claiming not to have received any evidence of the incident from London. Moscow has promised retaliation for the diplomatic expulsions.

"Evidence for culpability points to the Russian state"

British foreign secretary Boris Johnson renewed his allegation that it was extremely likely that Vladimir Putin personally gave the order to use the nerve agent to attack the former spy Sergei Skripal.   (20.03.2018)

In an exclusive interview with DW's Zhanna Nemtsova, UK Foreign Secretary Johnson explains why London thinks Russia is responsible for the attack on ex-spy Sergei Skripal, citing "bitter" experiences with the Kremlin. (20.03.2018)