Boris Johnson: Russia′s position in Skripal case is ′increasingly bizarre′ | Europe | News and current affairs from around the continent | DW | 20.03.2018

In an exclusive interview with DW's Zhanna Nemtsova, UK Foreign Secretary Johnson explains why London thinks Russia is responsible for the attack on ex-spy Sergei Skripal, citing "bitter" experiences with the Kremlin.

Johnson: 'Overwhelmingly likely that it was Putin's decision'

DW: Mr. Johnson, some days ago you said that it was extremely likely that President Putin personally ordered the use of a nerve agent to attack former double agent Sergei Skripal. What do you and the British Parliament have as evidence to support this view?

Boris Johnson:I think it's very important first of all to show that we think the culprits for this are not the Russian people, not Russia. We have no quarrel with Russia. These are issues with the Kremlin and with the Russian state as it currently is. And the reason I said what I did was that if you look at the stuff that's been used, it is a Novichok agent, according to our scientists at Porton Down. You also have to consider that Sergei Skripal is somebody who is being identified as a target for a liquidation and that Vladimir Putin has himself said that traitors, i.e. defectors such as Mr. Skripal, should be poisoned. So it's a Russian-only nerve agent.

Do you have any solid evidence that Putin directly ordered it? Because what you said is the most direct accusation of Russia's leader ever.

I'm afraid he's in charge of the clattering train, as we say in the UK. Somebody has to be responsible, and we in the UK think that the evidence, the culpability points to the Russian state, as it did in the case of Alexander Litvinenko. You remember that the trail of polonium led back very clearly to the Russian state. In the end, Mr. Putin is in charge, and I'm afraid he cannot escape responsibility and culpability.

Why did you — I mean, the British government —make this statement without waiting for the outcome of the investigation that you are conducting right now?

It is because we have such a bitter experience of what happens with Putin's Russia when we have a problem like this. Twelve years ago we had the assassination in London of Alexander Litvinenko. And at that stage, this was an extraordinary event. The UK proceeded with immense care and slowness and we decided to work with the Russian judicial system to try to extradite Mr. Kovtun and Mr. Lugovoi, who were strongly suspected of having been responsible. And in the end, we just got a sort of sneering sarcastic refusal to engage with our judicial process. We felt it was very important to take this decision, to get on, to show that if you are going to recklessly use a nerve agent of the kind that hasn't been used in Europe since World War II, if you're going to do that in Salisbury, then you've got to face some diplomatic consequences. 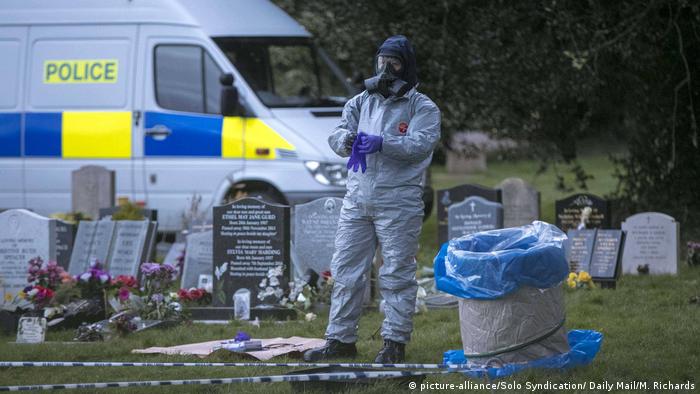 Investigators have been examining several sites visited by the victims

You argue that the source of this nerve agent, Novichok, is Russia. How did you manage to find it out so quickly? Does Britain possess samples of it?

Let me be clear with you … When I look at the evidence, I mean the people from Porton Down, the laboratory …

So they have the samples …

They do. And they were absolutely categorical and I asked the guy myself, I said, "Are you sure?" And he said there's no doubt. We have very little alternative but to take the action that we have taken. But I must say the difference between this time and what happened 12 years ago with Alexander Litvinenko is also that there is much more sympathy in the international community, far more understanding of the kind of behavior that Russia has been engaged in in the last few years. And round the table in Brussels, talking to all the other European countries, there's hardly anybody who hasn't experienced directly or indirectly some kind of malign or disruptive behavior.

But in an interview on Sunday you mentioned that you would like to have a constructive cooperation with Russia on the issue. Having accused Putin directly, how do you see this happening?

As the prime minister said, we gave a choice. We said, look, this stuff is Novichok. If there's a rational explanation of how it escaped your stockpiles and how it has come to be used on the streets of Salisbury, then come on: Let's work together and get to the bottom of it. If, on the other hand, there's no explanation, we can only conclude it's the agency of the Russian state. And we got no answer. We were treated with lots of sarcastic tweets and trolls.

I think, in the first instance, if I may respectfully say to the Kremlin detectives, we will trust to the technical experts of the Organization for the Prohibition of Chemical Weapons. Let's see what their assessment is. That's the proper procedure that the UK has to follow under the Chemical Weapons Treaty. And, you know, I just have to say that I find the Russian position about what has happened to this Novichok increasingly bizarre.

So the British government and the prime minister of the UK have both announced some measures, and you have already expelled 23 Russian diplomats from Britain and got the symmetrical response. What other measures are you going to take?

We have expelled 23 diplomats, probably spies masquerading as diplomats, and there are other things that we are going to do. In particular, we're toughening up our borders; we have plenty of laws which allow us to crack down on money in the UK that has been illicitly or corruptly obtained. We can do that. We have the National Crime Agency, the National Economic Crime Unit. And they will get on with that work. But I must stress to you that the UK is a country under the rule of law, and I cannot as a politician say, you know, go after that person's cash, do this, do that. That's not how it works.

Boris Johnson is the UK Foreign Secretary. He has been in office since July 2016. This is Johnson's first Cabinet post. Before his appointment, he served as mayor of London for eight years.

The interview was conducted by Zhanna Nemtsova

Vladimir Putin has called former agent Sergei Skripal a "scumbag" who betrayed his country. Skripal and his daughter were poisoned in what UK authorities say was a nerve agent attack carried out by Russian intelligence. (03.10.2018)