Fresh off an electoral victory, the Russian president has dismissed allegations that Moscow poisoned ex-spy Sergei Skripal in the UK. The EU has called on Moscow to provide "complete disclosure" of its Novichok program. 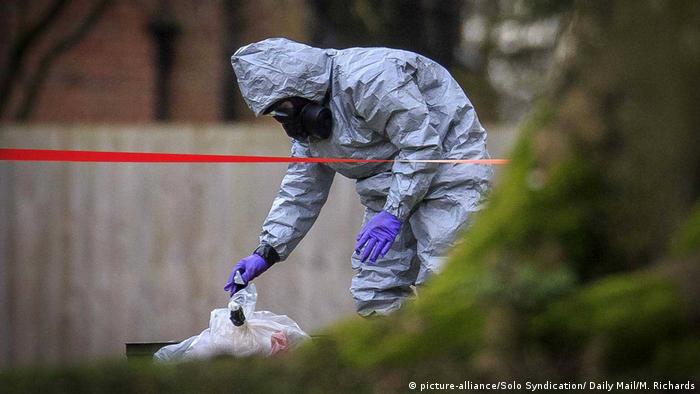 Russian President Vladimir Putin on Sunday rejected claims of Moscow's involvement in a nerve agent attack targeting a former spy and his daughter on British soil.

"It's complete drivel, rubbish, nonsense that somebody in Russia would allow themselves to do such a thing ahead of elections and the World Cup," Putin said in his first comments since the attack. "It's quite obvious that if it were a military-grade nerve agent, people would have died on the spot."

The Russian president claimed that Moscow "destroyed all our chemical weapons under international oversight unlike some of our partners." Last year, Russia said it destroyed the chemical weapons stockpiles it inherited after the collapse of the Soviet Union in the early 1990s.

Kremlin spokesman Dmitri Peskov said Monday that the UK must provide evidence to back their allegations or apologize "sooner or later."

According to British authorities, former Russian intelligence officer Sergei Skripal and his daughter Yulia were poisoned by a nerve agent from a group of chemical compounds known as Novichok. The nerve agent was developed by the Soviet Union to circumvent the Chemical Weapons Convention.

Up to 22 people were also treated for exposure to the nerve agent, including Nick Bailey, the first officer on the scene. British authorities have called it the first such attack in Europe since World War II.

Following an EU foreign ministers meeting, the bloc issued a statement saying it "is shocked at the offensive use of any military-grade nerve agent … for the first time on European soil in over 70 years."

"The Union calls on Russia to address urgently the questions raised by the UK and the international community and to provide immediate, full and complete disclosure of its Novichok program to the OPCW."

Investigators of the Organization for the Prohibition of Chemical Weapons (OPCW) are expected to arrive in the UK on Monday to collect samples of the nerve agent to corroborate the UK's findings. After winning a fourth term as president, Vladimir Putin dismissed British claims that Moscow was at the heart of the nerve agent attack

Read more: As UK-Russia relations deteriorate, is it crisis or melodrama?

"What people can see is that this is a classic Russian strategy of trying to conceal the needle of truth in a haystack of lies and obfuscation."

Since the public poisoning in Salisbury, the UK and Russia have witnessed relations deteriorate further, with London expelling 23 diplomats and Moscow responding with similar measures. The UK has signaled it is preparing further measures against Russia, including possibly targeting Russians who "have obtained wealth by corruption."