In a speech, the head of NATO, Jens Stoltenberg, spoke of Afghanistan, defense spending and the threat of a 'new Cold War.' The defense alliance is celebrating its 70th anniversary. 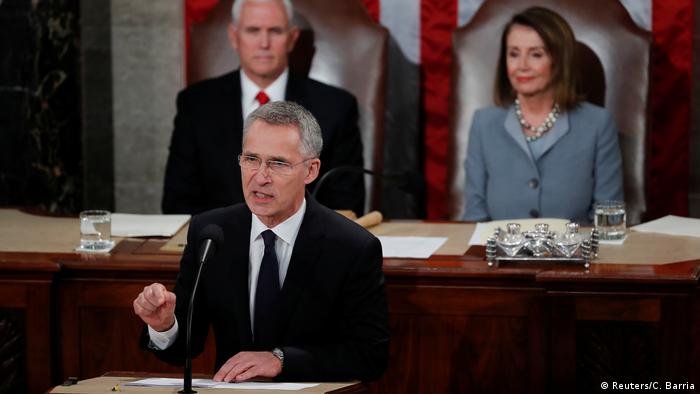 NATO Secretary-General Jens Stoltenberg delivered an unprecedented address to the US Congress Wednesday to condemn the idea of an arms race with Russia.

He also welcomed US President Donald Trump's efforts to push allies to spend their fair share on defense. But he criticized Trump's policy in Afghanistan.

Stoltenberg was in Washington to mark the 70th anniversary of the founding of NATO, whose charter was signed in the US capital.

A day after Trump called the war in Afghanistan "ridiculous," amid peace talks with the Taliban, Stoltenberg reminded US lawmakers of the "cruelty" of the regime and its role in protecting terrorists who planned the September 11 attacks.

Perhaps alluding to how the US pulled out of the war in Syria without discussing the move with allies, the former Norwegian prime minister said that NATO had entered Afghanistan together, and that it would "leave together" when the time came.

'We do not want a new Cold War'

"We do not want to isolate Russia. We strive for a better relationship with Russia."

'Allies must spend more on defense'

Stoltenberg also took the opportunity to highlight how Trump has repeatedly taken other NATO members, especially Germany, to task for not spending the agreed target of 2 percent of gross domestic product (GDP) on defense.

He said that unfortunately, today's world sometimes requires a military solution: "Dialogue would not have stopped ISIS," he said in reference to the terror group in Syria. Allies were increasing their defense budgets after years of cuts, he noted.

"Allies must spend more on defense. This has been the clear message from President Trump. And this message is having a real impact," Stoltenberg said.

This comment received a strong round of applause. Trump has repeatedly taken credit for the uptick, despite the fact that NATO allies have been increasing their defense spending since 2014.

Later on Wednesday, Vice President Mike Pence singled out Berlin for its low defense spending and ties to Russia.

"Germany must do more. And we cannot ensure the defense of the West if our allies grow dependent on Russia," said Pence, referring to the controversial Nord Stream 2 pipeline that will deliver Russian gas directly to Germany.

"It is simply unacceptable for Europe's largest economy to continue to ignore the threat of Russian aggression and neglect its own self-defense and our common defense," he added.

NATO's Secretary-General Jens Stoltenberg has met with US President Donald Trump in Washington ahead of the alliance's 70th anniversary. Trump Germany's contributions have been a point of discussion. (02.04.2019)

As US and Taliban negotiators make progress in their talks on the issue of foreign troop withdrawal and counterterrorism, Germany is mulling over a strategy to continue its engagement with the war-torn nation. (20.03.2019)