Clashes have broken out in Warsaw between nationalists and police amid celebrations of Poland's Independence Day. In one case, authorities turned a water cannon against the demonstrators. 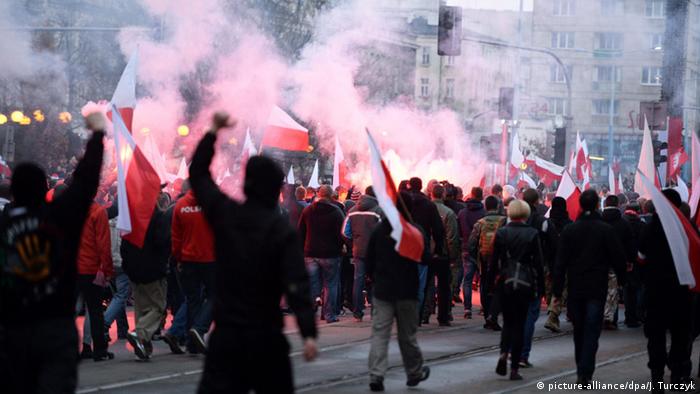 Polish media broadcast scenes of right-wing youth, some masked, throwing rocks, firecrackers and cobblestones at police in the streets of Warsaw on Tuesday. The nationalists have not stated any single reason for their demonstration, which has turned into an annual ritual on the Polish public holiday - and a violent annual ritual for at least the past four years.

Police said they had arrested several people, but wouldn't specify how many.

Earlier Tuesday, President Bronislaw Komorowski led official celebrations and a march for the holiday, which celebrates Poland's regaining its independence after World War I, which ended on November 11, 1918. The preceding 123 years had seen Poland effectively wiped off the map, partitioned by Austria, Russia and the German kingdom of Prussia. World War II saw Nazi Germany and Russia fight a bloody war on Polish territory, and then the country spent the next several decades, until 1989, as part of the Soviet bloc.