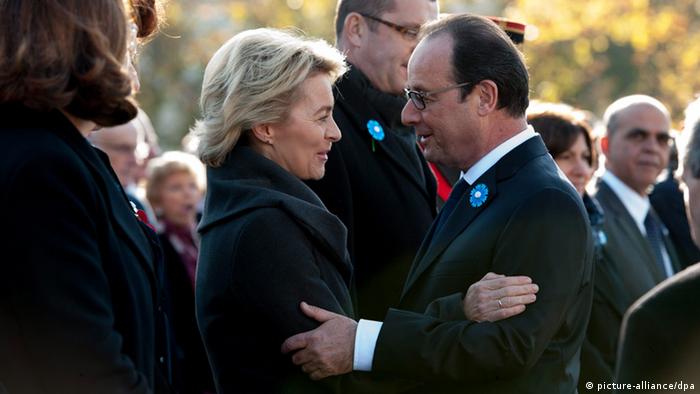 Europe has marked Armistice Day with ceremonies and moments of silence. With 2014 marking the centenary of the start of World War I, this year's events have a special significance for many. The war ended on November 11, 1918. 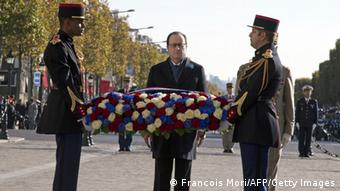 In Paris, President Francois Hollande (right in photo) laid a wreath at France's tomb of the unknown soldier under the Arc de Triomphe. In Ablain-Saint-Nazaire, he inaugurated a memorial alongside German Defense Minister Ursula von der Leyen (left in photo) and North Rhine-Westphalia State Premier Hannelore Kraft, as well as British and Belgian officials. France observes Armistice Day as a public holiday,

The Ring of Memory carries the names of 580,000 soldiers of the roughly 10 million who died in the war listed alphabetically, without nationality. Several million civilians also died. The area saw heavy fighting between French and German troops during the war, with many casualties on both sides.

In 2009, Angela Merkel made history by being the first German chancellor to attend France's Armistice Day ceremonies.

Thousands gathered at the Tower of London, where ceramic poppies have spilled into the moat as part of an installation paying tribute to killed soldiers. On this Remembrance Day, as the holiday is known in the United Kingdom, 13-year-old cadet Harry Hayes planted the final poppy of 888,246 - one for each of the British and Commonwealth soldiers killed in the war, including the boy's great-great-great uncle Private Patrick Kelly of the 1st Battalion, Irish Guards.

"It is an amazing honor," Hayes told Sky News on Tuesday. "Seeing all these poppies and I managed to plant the last one."

Britain has used the poppy as its remembrance symbol since World War I, when a poem from the era recalled the fragile flower growing between gravestones in the Belgian region of Flanders. Queen Elizabeth II observed a two-minute silence privately. On Sunday, the queen, alongside political and military figures, had laid wreaths at the country's main war memorial, the Cenotaph, in central London.

A remembrance ceremony also took place in Belgium in the medieval town of Ypres, where the buglers of the Last Post under the Menin Gate played their haunting tribute to the dead. Ever since the start of the centenary in August, the buglers at the massive gate have drawn large crowds of tourists and pilgrims. The gate's vaulted ceiling lists the names of more than 54,000 British and Commonwealth soldiers who lost their lives during World War I and have no known grave.

Later on Tuesday, US Vice President Joe Biden will lay a wreath at the Tomb of the Unknown Soldier at Arlington National Cemetery in Washington. And officials expect hundreds of thousands of people at the National Mall in Washington for a concert to commemorate Veterans Day, the holiday celebrated in the United States.