The German soldiers that history forgot | World | Breaking news and perspectives from around the globe | DW | 10.04.2014

Each year, thousands of people visit cemeteries in Belgium to honor the soldiers who lost their lives in WWI. Few of those people, however, come to remember the German soldiers who perished. 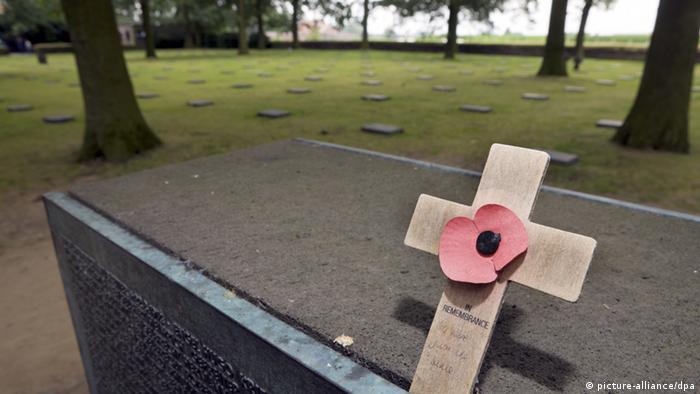 The bugles that sound daily at a number of sites in Belgium serve as a haunting reminder of the hundreds of thousands of men who laid down their lives along this stretch of the Western Front during World War I.

At one of those war memorials, however, there is significantly less activity. Even on Armistice Day, the official day of remembrance, it seems the only beings here are the birds in the trees. The Langemark cemetery is the final resting place of 44,294 German soldiers. More than half of them are buried in one mass grave, the Kameraden Grab, their names etched on large dark plaques running alongside the site.

"It's a tragedy that hardly anyone comes here. Least of all the Germans themselves, many of whom know very little about what happened," Andre de Bruin, a guide and founder Over The Top Tours, told DW. 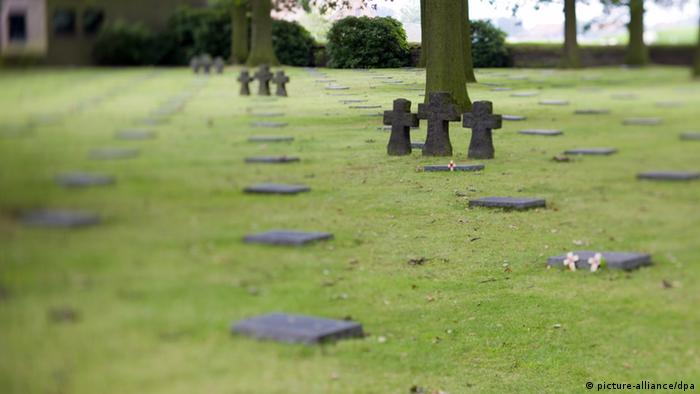 In some of the cemeteries, not even headstones were permitted

Andre points to rows of gravestones that lie flat on the ground, explaining: "Belgium imposed very strict restrictions on German memorials. Headstones were not allowed to stand, not like those of the Commonwealth soldiers and there were many other rules that applied only to Germans."

There were hundreds of burial sites of German soldiers after 1918 but in the 1950s, Belgium ordered that the bodies be regrouped in no more than four sites, of which Langemark is one.

"It was probably done out of hatred for what happened, especially during World War II when Belgium was occupied. They even forbade the use of crosses above the headstones," de Bruin said.

Germany lost nearly two million men in the First World War, the greatest number of casualties suffered by any nation. Yet for decades, this chapter of history was hardly taught at German schools. Today, the care of German memorials in western Flanders, where some of the bloodiest battles took place, is carried out by a voluntary association, the German War Graves Commission, and its grounds are tended by students.

At the back of Langemark, rain-sodden fields stretch ahead, the same ground that turned into a giant, water-clogged inferno of craters and trenches almost a century ago. It is here that 3,000 German students were killed in 1914.

"They had received just six weeks basic training before they were sent to the front to accompany German soldiers in what was meant to be a triumphant march to victory. But they were all killed in the ensuing battles," Andre explained.

"These men died in the same horrific battles as everyone here and yet on Armistice Day they will lie mostly unremembered," he added. 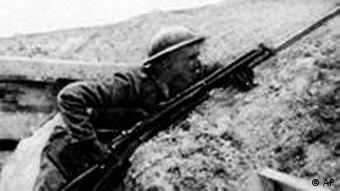 Only few visitors from Germany

Only a tiny number of Germans come to this part of Belgium whereas thousands come to visit the Commonwealth graves from as far away as Australia. A visitors' book at Langemark shows that most visitors are British school children, who visit the site as part of their trips around Ypres.

"We always bring the children here as part of our tours of the World War I sites. We feel that German families mourned their dead just as British or Belgian families would have done," Leonie Giles, a teacher at St Nicholas School in northwest England, told DW.

A colleague added that "the aura is very somber compared to the pristine white cemeteries where the British are buried, which are more like English gardens. But we want our kids to realize that these soldiers were just like the British who died for King and Country."

Simon, a thirteen-year old carrying a small wooden cross with a poppy, said: "It's so vast, that mass grave. And it's such a sad place. I feel very emotional."

Remains of soldiers are still found in this area every year, and these are added to the mass grave. But these days, their burials are done with full military honors and are attended by officials from Germany and Belgium - a sign perhaps that, in time, more recognition will be given to these men who volunteered to lay down their lives.

"Deutschland muss leben auch wenn wir sterben müssen," reads the plaque above their graves. "Germany must live even if we must die."

First Lady of the United States Michelle Obama surprised some 200 service men and women in Germany, when she visited their air base in Ramstein in Rhineland-Palatinate and helped to serve up a special Veterans Day meal. (11.11.2010)

Two days after French President Nicolas Sarkozy attended Germany's 20th anniversary reunification festivities in Berlin, Chancellor Angela Merkel has been in Paris to mark the 91st anniversary of the end of World War I. (11.11.2009)

Youths on motorbikes have vandalized 73 German grave memorials in a World War I cemetery in France. However, police say the damage was not motivated by any anti-German feeling. (23.08.2010)