Narendra Modi's 4 years in power: Good or bad for India?

Prime Minister Narendra Modi will seek a second term in office in 2019. His four years at the helm have been mired in controversies, with the PM receiving praise as well as heavy criticism. Murali Krishnan reports. 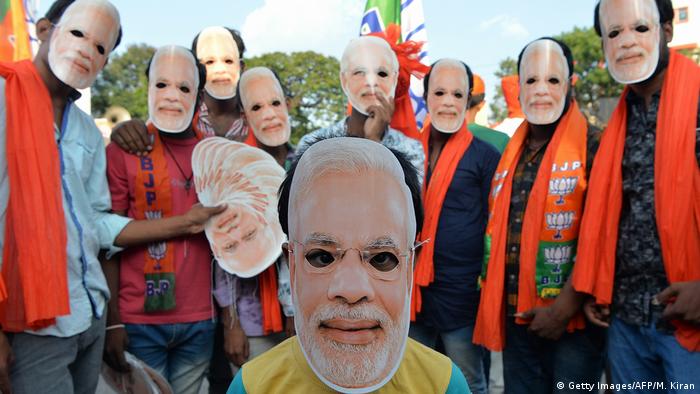 To celebrate four years in in power, Prime Minister Narendra Modi's government has launched a campaign to showcase its achievements and accomplishments. Millions of rupees are being pumped into a country-wide campaign, which political analysts and commentators say are aimed at convincing Indians to vote for Modi's Hindu nationalist Bharatiya Janata Party (BJP) in the 2019 general elections.

To counter the BJP, the Congress, India's main opposition party, has come up with its own campaign, "India Betrayed," saying the government has failed to deliver to the masses.

Analysts are, however, divided on the four-year performance of Modi's government.

The charismatic Indian politician came to power after his party secured 282 seats in the 543-strong parliament in the 2014 general election. His main election pledge was to transform India's economy. But experts say the BJP government has not lived up to its promise. A corruption-free regime, an inclusive India, clean governance, 10 million new jobs per year and increasing farm incomes by 2022 remain a distant dream.

"This government is all about hype. It hasn't delivered on most of its promises. The agriculture sector has suffered, the unemployment rate has spiked, fiscal deficit is increasing, and Indian society is more polarized than ever," Sudha Pai, a political scientist, told DW.

A series of structural economic reforms such as Goods and Service Tax and demonetization that were expected to be game-changers caused disruption in the South Asian country's economy. Although the Goods and Service Tax was a landmark legislation that overhauled India's indirect tax regime, it has been burdened by a complex infrastructure.

Demonetization, which was introduced in November 2016 to flush out illegal or black money, was a poorly executed scheme. Last year, the country's central bank revealed that nearly all demonetized currency had returned to the system. Currency worth 15.28 trillion rupees (around €203 billion, $235 billion) has been deposited in banks, which means that either there was no significant black money, or hoarders found a way to legitimize most of their ill-gotten cash.

"Modi sold the demonetization idea as a move for the benefit of the poor. But it turned out to be a colossal policy failure and the agrarian class is still reeling from it," analyst M K Venu told DW.

"The move brought the country's informal economy to a standstill and dented growth," Venu added.

"The government has not succeeded in improving the business environment in India. Local and foreign investors have reacted cautiously to the Modi government's economic policies," infrastructure expert Manish Puri told DW.

"This will be our year of consolidation of the policies and programs that we have implemented. In our prime minister, we have a strong leader with a mass appeal. His capacity to change India's destiny is globally recognized. His insistence on integrity, his indefatigable capacity to work, his clarity of policy and direction, his boldness in taking steps in the larger national interest gives the NDA a natural political advantage. Clarity and credibility are hallmarks of the NDA Government," Jaitley said, referring to the National Democratic Alliance coalition government in New Delhi.

The rise of religious intolerance has definitely tarnished the image of the ruling BJP and PM Modi in the past four years. Violence against Muslims, attacks on dissidents, liberal activists and marginalization of low-caste Hindus have been severely criticized by national and international human rights organizations.

The right-wing Hindu groups that had very little influence in Indian society have become extremely powerful since Modi's victory in the 2014 election. Forced conversions of Muslims and Christians to Hinduism have been on the rise.

"We feel that the idea of an inclusive, secular India is under threat. Hate and fear loom large and the BJP is promoting these divisions," Gauhar Raza, a poet and social activist, told DW.

Shashi Tharoor, a Congress party lawmaker, said the BJP unleashed forces of intolerance, hatred and bigotry in the country.

"If they had mismanaged the economy, at least they should have protected the social fabric. But they have wounded India's soul. Such a climate did not prevail in the past," Tharoor said.