The Russian maestro was given an ultimatum to denounce Putin's invasion of Ukraine, but failed to react. Opera diva Anna Netrebko is also canceling her performances. 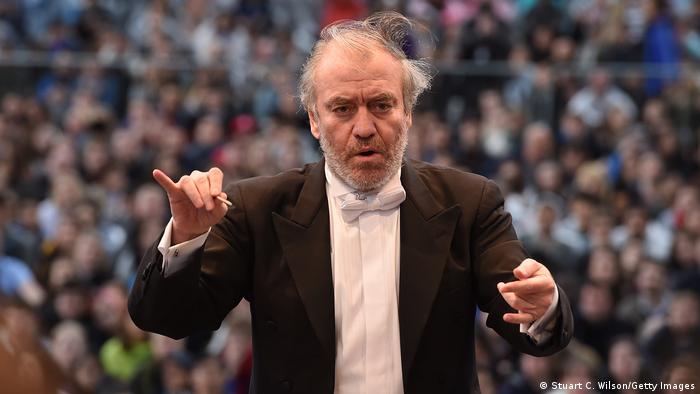 Munich's mayor, Dieter Reiter, issued an ultimatum on Friday, requiring conductor Valery Gergiev to denounce the "brutal war of aggression that Putin is waging against Ukraine" before February 28, or be dismissed as the principal conductor of the Munich Philharmonic orchestra, three years before the expiration of his contract.

The Russian maestro did not react, leading the mayor to officially announce the conductor's dismissal on Tuesday.

"Munich has parted ways with chief conductor Valery Gergiev. With immediate effect, there will be no further concerts by the Munich Philharmonic under his direction," Reiter said in a press statement.

"I would have expected him to reconsider and revise his very positive assessment of the Russian ruler. He didn't," Reiter added. "In the current situation, however, a clear signal for the orchestra, its audience, the public and city politics would have been essential in order to be able to continue working together." 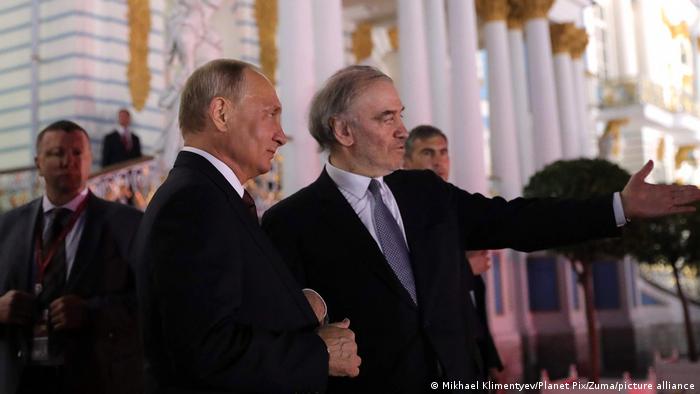 Gergiev together with Vladimir Putin at the St. Petersburg festival the Stars of the White Nights in 2018

Valery Gergiev, 68, was until now one of the world's most sought-after conductors.

His close ties to Putin have been an ongoing source of controversy throughout the past decade.

He declared his loyalty to the Russian president regarding the annexation of Crimea, and took part in concerts in bombarded Palmyra alongside the Syrian army. Gay rights activists had pressured him to denounce the Russian leader's  homophobic laws in 2013; his reaction was deemed unsatisfactory.

Hours after Munich's announcement, operatic soprano Anna Netrebko briefly posted on Instagram a picture of herself holding hands with Gergiev, her longtime mentor.

The Russian opera diva also announced on Tuesday that she was canceling all her performances: "This is not a time for me to make music and perform," she said in a statement through the Zurich Opera. "I have therefore decided to take a step back from performing for the time being. It is an extremely difficult decision for me, but I know that my audience will understand and respect this decision."

Netrebko — who celebrated her 50th birthday in the Kremlin alongside Putin in September 2021 — was also criticized for not condemning the Russian ruler's invasion and attacks on Ukraine directly.

On Monday, Netrebko did post on Instagram a statement denouncing the war, without however naming Putin: "I want this war to end and for people to be able to live in peace. This is what I hope and pray for."

But she also added, "forcing artists, or any public figure to voice their political opinions in public and to denounce their homeland is not right."

A string of cancelations for the globe-trotting conductor

Beyond the Munich Philharmonic position, a number of international concerts that were to be conducted by Gergiev have been canceled.

New York's Carnegie Hall was the first to dismiss the Russian maestro, indicating on Friday that he would be dropped from a series of performances planned at the concert hall.

The same day, the Czech Republic's Dvorak Prague festival called off the concerts he was to conduct with the Munich Philharmonic Orchestra in September.

Similarly, La Scala in Milan had also required the conductor to publicly appeal for a "peaceful solution" to the conflict, stating it would otherwise cut short his engagement conducting Tchaikovsky's "The Queen of Spades," scheduled for early March. Gergiev's reaction never came. "I think we can rule him out at this stage," Milan Mayor Giuseppe Sala told reporters on Monday. 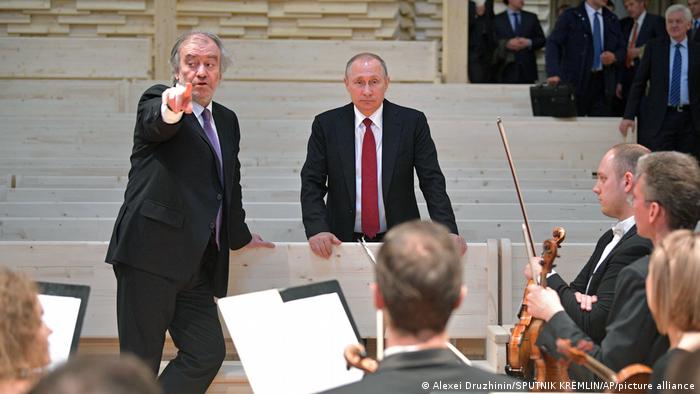 One of the world's most sought-after conductors, Gergiev's international reputation is tarnished by his support of Putin

"The invasion of Ukraine by Russia will lead the Cité de la Musique - Philharmonie de Paris to modify its programming in the coming months in solidarity with the Ukrainian people," wrote the Paris concert hall, referring to two Gergiev events planned for April.

The Verbier Festival announced that it had "requested and accepted" Gergiev's resignation from the post of musical director of its orchestra, while the Lucerne Festival canceled two concerts planned for this summer, as a sign of "solidarity" with "the Ukrainian people."

Gergiev's Munich-based artistic agent, Marcus Felsner, had announced on Sunday that he would no longer be representing the conductor.

He wrote in a statement that even though he still believed that the Russian maestro was "the greatest conductor alive and an extraordinary human being with a profound sense of decency," he could no longer represent his client, who "will not, or cannot, publicly end his long-expressed support for a regime that has come to commit such crimes."

"In the light of the criminal war waged by the Russian regime against the democratic and independent nation of Ukraine, and against the European open society as a whole," added Felsner, "it has become impossible for us, and clearly unwelcome, to defend the interests of Maestro Gergiev."

Update: This piece was updated shortly after its publication with news related to opera singer Anna Netrebko.