With the city's dark past, Munich's Documentation Center for the History of National Socialism is long overdue. The new building's foundation stone has now been laid at the former site of the Nazi party headquarters. 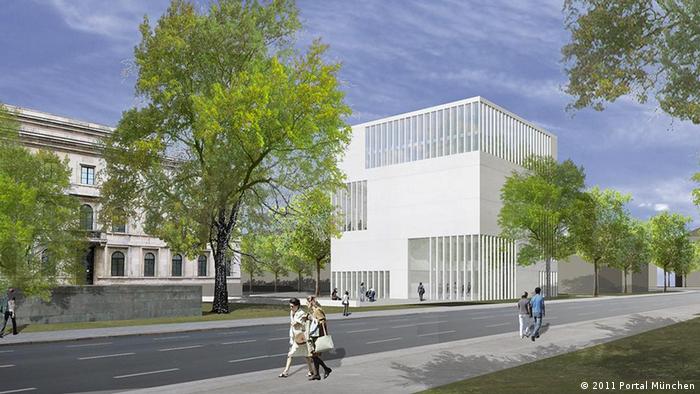 "Barlow Palace" is almost unknown today in Munich, despite its unique role in the city's history. From 1931 until it was destroyed in the Second World War, the National Socialist party had its headquarters there. In the 1950s, the bombed-out remains of what was known as the "Brown House" during Nazi occupation were cleared away. 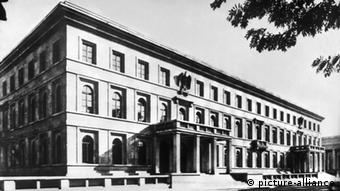 The "Brown House," the former party headquarters of the National Socialists

Since 2011, building work has been underway at the site, with the aim of creating the Munich Documentation Center for the History of National Socialism. The center will give a detailed history of the Nazi regime, from the very place where the crimes and terror were once organized.

An impressive working group of experts, historians and architects have been working on the design of the new center.

"The basic idea of the concept is to work aspects of the original building into the presentation," said Wilfried Nerdinger, director of the Munich Architecture Museum and a member of the team working on the project.

It's hoped a link between past and present Munich can be achieved. Hans-Georg Küppers, from the city's culture ministry, said the exhibitions should force visitors to ask themselves questions like: "Why Munich?" and "How does that affect me today?" 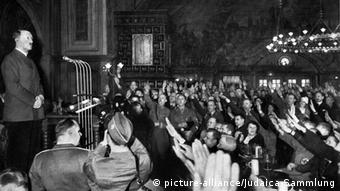 Adolf Hitler making an address in the Munich Hofbräuhaus in 1941

Munich played a central role in the beginnings and rise to popularity of Nazism. It was here that the National Socialist party was founded, the party headquarters were here and it was also the scene of the Beer Hall Putsch in 1923 when Adolf Hitler unsuccessfully tried to seize power. Hitler himself called Munich the "capital" of his movement and tried to design the city in accordance with his aesthetic vision.

When it opens in 2014, the new center will set out to examine the reasons and circumstances that lead to the Nazi rise of power in Munich. In addition, techniques of propaganda and terror, the persecution of non-conformists and the uprisings against the Nazis will also be documented. The building will have four levels, with over 1,000 square meters (10,800 square feet) of display space.

New developments in a drawn-out process 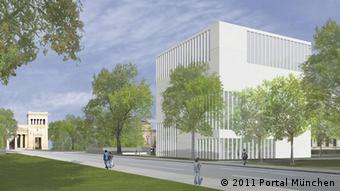 In Berlin, Cologne and Nuremberg there are similar documentation centers that have been around for years. The building in Munich was finally approved in 2001, though first discussions about such a facility started up shortly after the end of World War II.

Heated arguments have since taken place over the position of the building, the finances and even the name of the center was uncertain for a time.

In November 2011 the founding director of the center, Irmtrud Wojak, resigned from her post following differences of opinion with the expert group. Since then, things have progressed at a fast pace and the city is now back on target with construction. 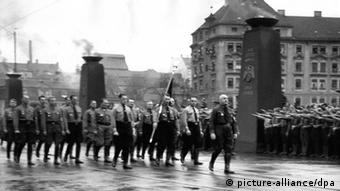 The foundation stone of the new building was laid March 9 - directly next to the Munich University of Music and Theater, also a building from the Nazi era.

Nearby are a number of buildings with historical relevance as well. There are the neo-classical museums of Königsplatz - it was on this square that the Nazis burned outlawed books in 1933 - and the city's Ludwig Maximillian University, where Hans and Sophie Scholl and others from the "White Rose" student protest group distributed anti-Nazism flyers.

The new documentation center will look very different to the surrounding buildings. It's designed as a cube with large windows that allows passers-by to look deep into history. It will be modern, simple and not too ostentatious - a building very different to the "Brown House" that once stood here.

No excerpts of Mein Kampf in Germany, court rules

A Munich court ruled on Thursday printing excerpts from Hitler's "Mein Kampf" remains forbidden in Germany. A British publisher had planned to publish extracts from a manifesto that still deeply divides opinion. (08.03.2012)

They're into organic farming, oppose GMOs and worry about endangered species. Experts say neonazis are increasingly cashing in on themes of the environmental movement to attract new supporters. (08.03.2012)

Munich Documentation Centre for the History of National Socialism