MSC Chairman Ischinger: 'Some degree of clarity has been reestablished'

Wolfgang Ischinger, chairman of the Munich Security Conference, took stock of this year's gathering. Some concerns regarding the Trump administration have been alleviated, he told DW in an interview. 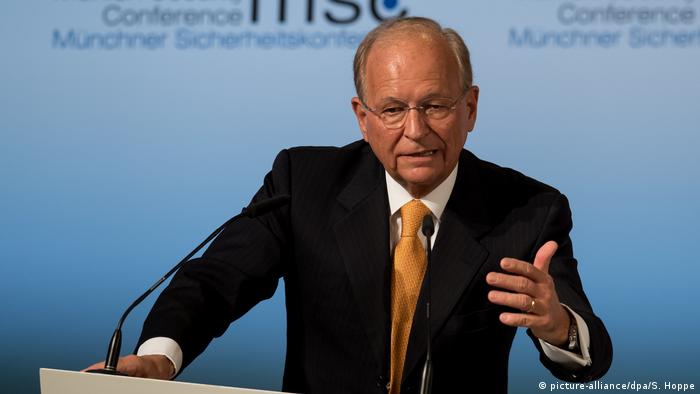 DW: The title of the conference included the words "post-west, post-order" with a question mark. Would you say that answer has now come in the negative? Are you reassured by what you heard from the US leaders here?

Wolfgang Ischinger: I'm partially reassured. I think most of the participants here are glad they came. When they arrived three days ago, many of them had a huge number of large question marks. At the end of these three days, I think the conclusion is some of the question marks can now be eliminated, but not all. The dimension of uncertainty is not over yet. We used to have lots of uncertainty about Russian intentions and about how to end the Syrian war. These uncertainties continue. Now, we came to Munich with the uncertainty about the intentions of the Trump administration regarding Russia, NATO, and many other issues. Some of these concerns have been alleviated and that is great. I think we can go home relatively satisfied that some degree of clarity has been reestablished.

You mentioned questions about Russia. They were raised here and included, among other issues, Russian hacking and also Russian disinformation - "fake news." What tools, if any, does the international community have against the weaponization of media and the internet?

Let me, first of all, say one refreshing thing that happened here during this conference: we were given [the chance] to see how US democracy and the US system is alive and well and kicking. We had Republican senators on stage who openly criticized their own president. We had Democratic senators who actually said something not so critical of the president. We don't see that very often with Russian or Chinese or representatives of other major powers that may be less open to debate, controversy, and fighting it out in a democratic manner. So I think that was good.

Now, to your question. I think the answers are not yet fully here. What we know is that we have to defend ourselves. The one point of departure is cyber security. We have been worrying about attacks on the electric grid, on the water supply, on communication equipment. I think we have to understand that our democratic institutions, our electoral processes, and our constitutional arrangements are part of our infrastructure. In other words, attacks on the German Bundestag or the Democratic National Committee in the United States are attacks on infrastructure. They should be regarded as such. We cannot just ignore them as some play that is happening. This is serious stuff, and I think we need to take it up. The Russian Foreign Minister [Sergey Lavrov] said – and I have not have time to study to what extent this is true – but he said the Russian government made suggestions a long time ago about working on these issues together. If it is possible to include Russia in a serious, bona fide effort to establish rules of behavior about what is allowed and what is not allowed in terms of manipulation, false information and cyber attacks, I think that would be good.

Wolfgang Ischinger is Chairman of the Munich Security Conference.

The interview was conducted by Melinda Crane.

BioNTech founders receive one of Germany's highest honors 2h ago