The migrants were plucked from several inflatable boats in the Strait of Gibraltar and returned to Morocco. The rescue came a day after one of the deadliest migrant shipwrecks in the Mediterranean this year. The Moroccan navy has rescued 242 migrants trying to cross the Mediterranean Sea to Spain in dinghies.

The migrants from sub-Saharan Africa were traveling in several inflatable dinghies when they experienced difficulties in the Strait of Gibraltar, which separates the continent from Europe, Morocco's official news agency (MAP) reported late on Friday.

The navy provided the migrants with medical care onboard and took them back to Morocco, MAP added.

Some 50 women and 12 minors were among those on board the boats.

Morocco is a primary gateway for thousands of Africans seeking to reach Europe. At its narrowest point, the Strait of Gibraltar is 14 kilometers (9 miles) wide.

Most migrants trying to reach Spain do so by sea, but there have been several incidents where migrants have scaled the border fences between Morocco and Spain's North African exclaves of Ceuta and Melilla.

Read more: Italy blocks own coast guard vessel with migrants on board

As the European Union's only territories on the African continent, migrants can claim asylum in either exclave. 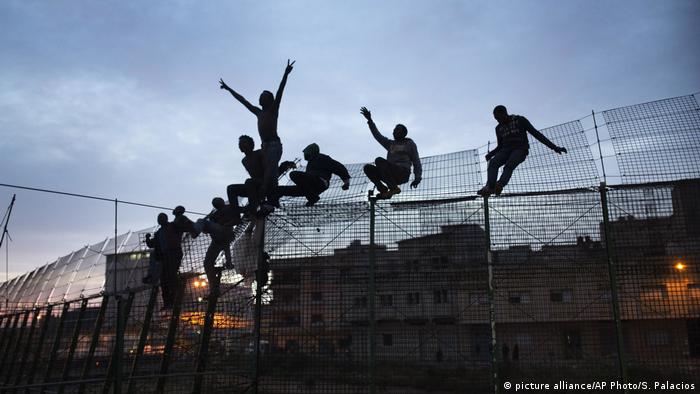 So far this year, more than 15,000 people have made it to Spain, according to estimates from the International Organization for Migration (IOM). However, more than 200 have died in the attempt.

On Thursday, an overloaded boat carrying some 400 migrants sank off Libya's coast.

The coast guard rescued 145 people from the scene near the port city of Khoms. Sixty-two bodies were subsequently pulled from the water.

Libya said most of those rescued were from Eritrea, although Palestinians and Sudanese nationals were also on board.

The head of the UN refugee agency, Filippo Grandi, called the wreck "the worst Mediterranean tragedy of this year."

Libya is the more significant transit point for migrants wishing to reach Europe.