Money on the agenda as Modi visits the UK | Europe| News and current affairs from around the continent | DW | 12.11.2015

Money on the agenda as Modi visits the UK

Despite recent controversies over religious intolerance in India, the British government will focus firmly on trade and strengthening ties during Modi's visit. Samira Shackle reports from London. 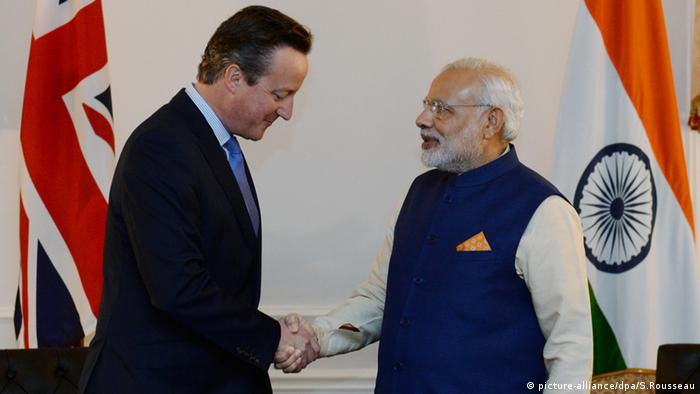 This week, Narendra Modi will make his first visit to the UK since winning the Indian premiership in 2014. His packed schedule will include lunch with the queen, an overnight stay at the prime minister's country residence Chequers, and an address to a crowd of up to 70,000 British Indians at London's Wembley Stadium.

This warm reception is quite a turnaround given that until last year Modi was banned from entering the UK at all, due to his alleged role in deadly anti-Muslim riots in Gujarat that took place in 2002 while he was chief minister of the state. Religious intolerance in India has made headlines worldwide after a series of high profile incidents including the lynching to death of a man accused of eating beef in September.

However, if a recent state visit by Chinese President Xi Jinping is anything to go by, concerns about rising religious intolerance in India will be far off the agenda. President Xi's visit, the first by a Chinese head of state in 10 years, reciprocated numerous trips made recently by UK leaders. As an official head of state, he received the full red carpet treatment, including a state banquet at Buckingham Palace. The trip was hailed by the Queen as a "defining moment" in the future of Sino-UK relations.

"For the current government, human rights concerns are far off the agenda," Dr Chris Ogden, senior lecturer in Asian Security at St Andrews University, told DW. "Xi Jinping is leading probably the world's largest authoritarian state. If it didn't come up when he visited, I severely doubt it will when Modi visits. The British government's aim will be new contracts, new business links, new investment - typical trade but also military trade - and some other commensurate agreements." 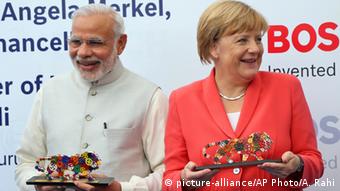 Both trips can be seen as part of British Prime Minister David Cameron's strategy of reaching out to these rising economies for trade and investment. As Britain's economy and the wider European economy have slowed down, strengthening these partnerships has become more of a priority for the UK. So far, Cameron has visited India three times, including the largest trade mission ever led by a British prime minister to any nation. (He took enough people to Mumbai in February 2014 to fill a jumbo jet).

"For the UK, India is important for two reasons," Rahul Roy-Chaudhury, senior South Asia fellow at the International Institute for Strategic Studies, told DW. "First, it's the fastest-growing major economy in the world. Clearly its economy is strengthening; it has recovered from the 2011 crash. For the UK, it's important to deal with a country that is rising economic power - there is a lot of business to be done, potentially."

India is currently the world's largest arms importer, which makes it an attractive market for Britain as it seeks to secure lucrative arms deals. It is also the third-biggest investor in Britain.

Another reason for Cameron's charm offensive toward the rising economic powers of Asia is the looming prospect of a British exit from the European Union. Robin Niblett, director of Chatham House, notes "the pursuit of a three-pronged foreign policy" by Cameron, placing emerging markets like India and China on a par with the US and the EU. Yet if Britain were to exit the EU, it might actually damage its relationship to these emerging powers. "From an Indian perspective, they like to have strong links with Britain because it provides an 'in' for strong links with the EU," explains Ogden. "So if Britain is no longer in the EU, it might be sidelined. I'd say there is a similar perspective from Beijing. 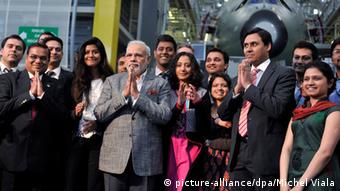 Modi has persuaded countries such as France to "make in India"

It is also worth remembering that despite Britain's past as a colonial power, it no longer holds the international weight it once did. Thus far, India under Modi has been aloof; Britain is no longer even in India's top 10 of trading partners, and Modi has already visited dozens of other countries to persuade them to "make in India," bypassing Britain. Yet the historical ties between the two countries remain important. With 1.6 million people of Indian descent, the UK is home to the biggest Indian diaspora anywhere except the Gulf. Modi's address to Wembley stadium is a projection of that power, which he wants to harness.

Xi's visit saw around 30 billion pounds (42 billion euros) worth of trade deals agreed upon. Modi's visit is expected to yield up to 10 billion pounds. Yet if Britain truly wants to move its relationship with India forward, it may need to look beyond trade.

"There are key areas on the strategic side that could improve bilateral links," says Roy-Chaudhury. "They are defense, cyber security, civil nuclear relations, counterterrorism - which is important to Modi as we've seen in joint statements in visits to France and Germany. I'd argue that's more important than the angles of economic cooperation and Britain's large Indian diaspora community, which is where the focus has been."