The Democratic Party of Moldova is no longer in power and its former leader, Vladimir Plahotniuc, has fled the country. What are the prospects for change?

"We will see who is less corrupted and who is better [at] managing and governing the country," the deputy president of the Democratic Party of Moldova (PDM) Vladimir Cebotari told Tim Sebastian in an exclusive interview with DW.

After decades of endemic corruption there have been dramatic changes in Europe's poorest country. A new government in Moldova is vowing to move the country forward and fight organized crime.  Corruption and poverty since independence from the Soviet Union in 1991 have led many Moldovans to seek opportunites abroad. The emigration rate from Moldova is one of the highest in the world. Moldovans remain especially vulnerable to human traffickers and sexual exploitation.

The Democratic Party of Moldova which had been part of governing coalitions in the country since 2009 has been described as moving the country to new level of corruption.

After an inconclusive vote in Feburary the PDM first attempted to have the country's Constitutional Court force new elections.  In June in the wake of international criticism, the party withdrew its claim on power. The US State Department welcomed the move, saying it reflected the will of the Moldovan people. 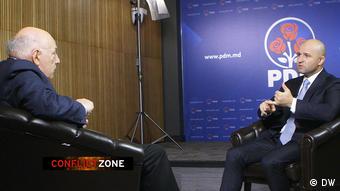 Transparency International described how the PDM under the leadership of Vladimir Plahotniuc, systematically used control of law enforcement and anti-corruption bodies over most of the last decade against political opponents. Transparency called that stage of corruption "state capture," which had repercussions on the rule of law and democratic development in Moldova.

Although never enjoying a majority of its own, the PDM utilized its power to gain new recruits on the national and local level. Corruption in the country is thought to beind one of the biggest banking scandals ever in which €1 billion "disappeared" from three Moldovan banks. One of those convicted in that scandal fled the country after the PDM stepped down.

Cebotari dismissed a resolution from the European Parliament that condemned backsliding on democratic standards in Moldova under the previous government. The parliament said the independence of the judiciary had been so undermined and collusion with business interests so widespread that it resulted "in the Republic of Moldova being a state captured by oligarchic interests with a concentration of economic and political power in the hands of a small group of people."

"I disagree with that because in my opinion that was a political statement," said Cebotari, a former justice minister.

Earlier in June, Plahotniuc stepped down from leadership of the party and fled the country.

The Bertelsmann Foundation said the former PDM president controlled the country's justice system.  Cebotari denied his former party leader had been a criminal.

"Of course he's not a crook. It's a person that has ensured a good and efficient governance ... maybe the party didn't focus too much on democracy."  The former justice minister said his party had "done a lot" to improve the lives of people in Moldova.

When confronted with conditions in the country's prisons, Cebotari admitted "it is a poor situation" but insisted it was improving.

How did the oligarch-in-chief leave? 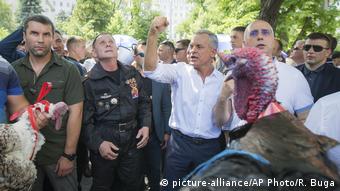 Former PDM Chairman Vladimir Plahotniuc (in white shirt) shortly before he stepped down from party leadership and fled Moldova.

He had no answers for Sebastian's questions about how Plahotniuc had left Moldova. "I don't know. Let's ask him," Cebotari said when asked how his former party leader was able to flee without the Moldovan interior ministry or border police having any records.

Plahotniuc is reportedly in London, apparently fearing for his safety in Moldova.

"He's coming back as long or when the security arrangements will be done," Cebotari said of the former PDM president.

Cebotari dismissed concerns raised by anti-corruption organizations such as Transparency International which said the party had used political power over criminal investigations to "intimidate" political rivals.

The new government is vowing to break what it calls "the vicious cycle" of corruption in Moldova.

"No one is [an] angel in Moldova. Even the new governments. Even the old governments, even democratic parties, the members, we’re not angels. No one is angel," Cebotari said.

Moldova's Democratic Party, headed by a powerful oligarch, has ceded power to an unlikely coalition of pro-Russian and pro-European forces. It's an alliance even the new prime minister called unnatural. (15.06.2019)

A day after a new government was approved after months of wrangling, the country's new acting president has called a fresh vote in September. The move prompted tens of thousands of people onto the streets. (09.06.2019)

The courts have stepped in after two blocs signed up to an unprecendented alliance to form a government after inconclusive elections in February. The coalition said it was formed in order to rid Moldova of oligarchy. (09.06.2019)