Facing growing criticism over India's botched COVID-19 response, the PM has said all adults will be offered free jabs in a major policy reversal. The announcement comes as India cautiously lifts restrictions. 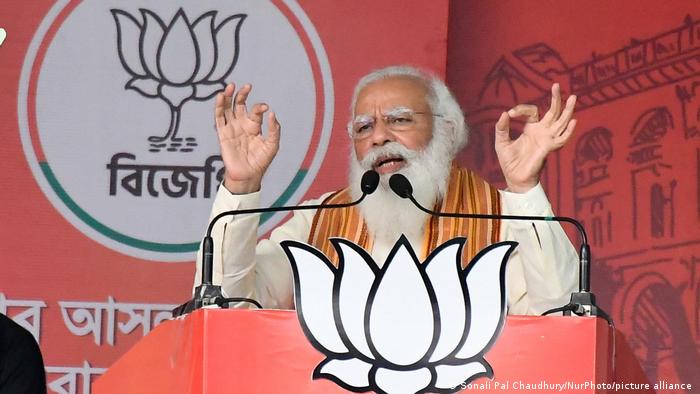 Indian Prime Minister Narendra Modi, speaking in a televised national address on Monday, declared that the federal government would once again be taking control of the country's coronavirus vaccination program and offering free vaccinations to all adults in the country.

"We will increase the speed of procuring vaccines and also increase the pace of the vaccination program," the prime minister said. Under the new policy, 75% of all vaccines made in India are to be purchased by the national government with private hospitals able to purchase the remaining 25%.

The changes reverse a previous policy, launched in April, that tasked states and the private sector with vaccinating those between the ages of 18 and 44. Under that prior policy, the central government gave free shots to front-line workers and people over 45 — with states and private hospitals left to give jabs to those between 18 and 44.

In his remarks, Modi said private hospitals would not be allowed to charge patients more than 150 rupees ($2.06 / €1.70) over the cost of each dose. Under the previous policy, states competed against one another as well as private institutions to acquire doses, making them both scarce and expensive — as well as leading to accusations that companies and hospitals were profiting off the situation.

"The center would have a lot more clout in dealing with the multinationals ... rather than individual states or smaller players directly negotiating with these companies," as Sudarshan Ballal, chairman at Manipal Hospitals, told Reuters news agency.

Pressure has been mounting on Modi and his government over its disastrous handling of the pandemic, especially after a new variant began driving infection rates ever higher, pushing official new infections to a peak of more than 400,000 a day in May. Last week, the Supreme Court of India called the country's vaccination program "arbitrary and irrational," bemoaning its inefficiency and inequity.

To date, India has administered just over 222 million vaccinations — less than 5% of the country's estimated adult population of 950 million has been fully inoculated. Some hospitals say a uniform vaccine distribution policy could ease the burden of procurement and prices.

Observers say the new policy will help get the situation under control, "This [centralized inoculation policy] eliminates states having to compete with one another for vaccine supplies, leaving them to concentrate on distributing them rapidly to their populations," as Gautam Menon, professor of physics and biology at Ashoka University in Delhi, said.

India has been administering the AstraZeneca vaccine, produced locally by the Serum Institute; Covaxin, made by local firm Bharat Biotech; and will launch Russia's Sputnik V this month.

This week, India's capital, New Delhi, and its financial hub, Mumbai, also began easing lockdowns that have been in place since April as infection levels have begun to fall.

In New Delhi, businesses and shops will be allowed to reopen, albeit with limited hours, and its subway will resume operations at 50% capacity. In Mumbai and across the coastal state of Maharashtra — which was one of the worst-hit in April and May — malls, movie theaters, restaurants and offices reopened in districts where test positivity rates have fallen below 5%. Maharashtra's huge rail network, however, will remain closed.

Some health experts fear restrictions are being eased too soon and there are concerns the virus is still spreading unchecked through India's rural villages, where testing and medical care are extremely limited.

With new infections and deaths declining, the government hopes that reopening the country could resuscitate its economy — which grew at only a 1.6% annual rate in the January-March quarter.

India documented 100,636 new official coronavirus cases over the past 24 hours, bringing its total number of infections close to 29 million, second only to the United States. On Monday, the Indian Ministry of Health and Family Welfare announced that 2,427 people had died from COVID-19 over the previous 24 hours, pushing the overall death toll to 349,186.

Both figures are widely believed to be massive undercounts.