COVID: Thousands of Indian children orphaned by pandemic | Asia | An in-depth look at news from across the continent | DW | 01.06.2021

Despite government efforts to assist children whose parents died as a result of the virus, rights activists say that such children are still vulnerable to trafficking, trauma and abuse. 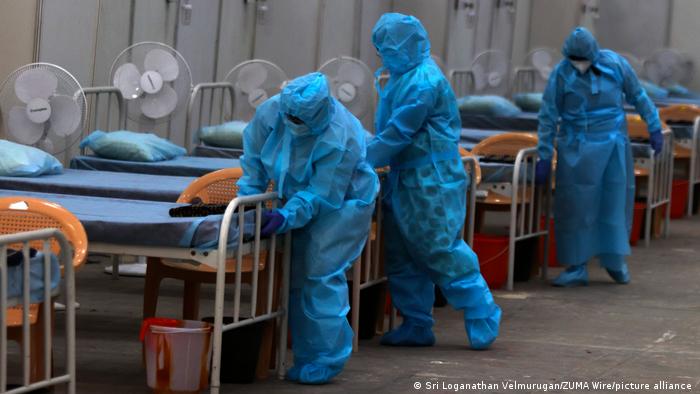 Over 9,000 children have been orphaned or left without a parent due to the virus

The COVID-19 pandemic, which has devastated families across India, has left thousands of children orphaned or without one parent.

Since the start of the pandemic, more than 1,700 children have lost both parents, while 140 have been abandoned and more than 7,400 have lost one of their parents to the virus, according to the National Commission for Protection of Child Rights (NCPCR).

The NCPCR submitted the report to the Supreme Court on Monday, detailing the problems of children orphaned during the pandemic and the need to provide them with food, shelter and clothing.

The northern state of Uttar Pradesh reported 2,110 children who were orphaned, lost one parent or were abandoned, followed by Bihar at 1,327 and Kerala at 952, according to government data. Child rights activists believe that this number is likely a significant underestimate.

In response, Prime Minister Narendra Modi's government last week announced measures to help orphaned children, with around 1 million rupees (€11,220, $13,700) set aside to be given to each child as a stipend, from the ages of 18 to 23. The funds would be offered from the PM-CARES scheme.

Financial help is not enough

However, child care institutions, child protection agencies and activists believe that the promise of financial assistance alone will not ensure the well-being of children affected by the pandemic.

In many cases, such financial packages are tied up in red tape. Benefits from several social welfare schemes never reach the intended beneficiaries because they are unaware of their eligibility or cannot manage the complicated procedures and documentation requirements needed to access the aid.

Nearly every state offers programs to support families in which a child has lost one parent. Most of those programs are designed to support the single parent and their children and provide cash transfers and entitlements under different government schemes.

"Those eligible for these benefits have shared their experiences of running from pillar to post to submit an endless list of documents," Anurag Kundu, the chairperson of the Delhi Commission for Protection of Child Rights, told DW.

Some maintain that child protection agencies should prioritize keeping the child with the extended family as long as it is suitable and safe and that institutional care should be the last resort.

"First of all, they would be boxed into a category of 'COVID orphans' and would be stigmatized. But before that, they will have to prove that their parents died of COVID to get support. Can we even begin to imagine how hard that will be?" Enakshi Ganguly, co-founder of the HAQ Center for Child Rights, told DW.

"Each child in foster care will have to go before government-run child welfare committees who will decide if the child deserves support," said Ganguly.

Many believe the system needs to be simplified to ensure that children are not unnecessarily sent into institutional care.

According to the Juvenile Justice Act in India, abandoned or orphaned children have to be assessed by a social worker in the district child welfare committee.

If no one claims the child, authorities place them in institutionalized care, and, with the approval of relatives, they make the children available for adoption.

Every year, just a few thousand children are formally adopted from agencies across India, which are regulated by the Central Adoption Resource Authority (CARA). Matches are made after all necessary checks are carried out and the state's child welfare committee declares a child legally free for adoption.

There are approximately 370,000 children in more than 9,500 orphanages across the country, but the number of adoptions is still low by comparison.

"Orphanages in India have not received adequate support from the government during COVID-19 and the lockdowns. This, along with severe resource constraints, puts the children they care for at greater risk," Satyajeet Mazumdar, the head of the NGO Catalysts for Social Action, told DW.

Mazumdar added that authorities were creating a new category of orphans by announcing a financial package that is available only to children who have been affected by the virus.

"Are they more vulnerable than any of the other children who have been orphaned due to a different cause?" he said.

Meanwhile, Shivani Bhaskar of Save the Children called for "public awareness through mass media and social media campaigns" regarding legal processes on adoption.

Desperate pleas to adopt orphaned children have circulated on social media in recent weeks, leaving them vulnerable to trafficking and abuse.

"There is a serious issue with the safety, well-being and future of children orphaned by the pandemic," Deepshikha Singh of Prayas, a juvenile aid center, told DW.

Beyond immediate needs, many children also require counseling to address grief and trauma.

"The COVID-19 pandemic has emerged as a child rights crisis. Today in India, children are losing parents and caregivers to the virus, leaving them extremely vulnerable and without parental care," Yasmin Ali Haque, UNICEF's India representative, told DW.