India′s crematorium workers bear the burden of COVID crisis | Asia | An in-depth look at news from across the continent | DW | 18.05.2021

India's coronavirus death toll is staggering, and those responsible for cremating the bodies of victims face hazardous working conditions and increased risks of infection at cremation sites. 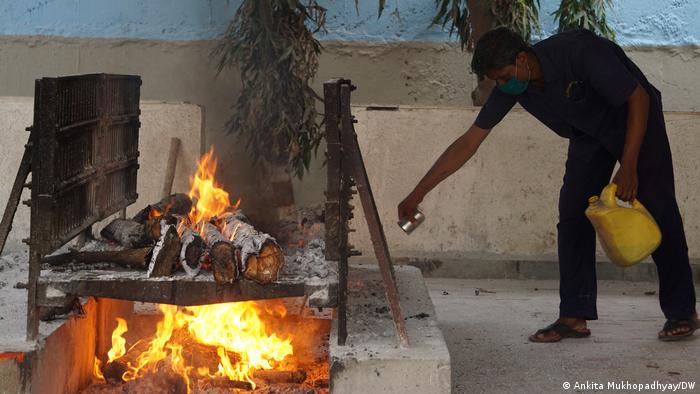 In March and April, the workers at this crematorium burned dozens of bodies every day

It's 9 a.m. and crematorium workers Arvind Gaekwad and Gautam Ingle are relaxing ahead of a hectic shift.

"One body is on its way, and more are supposed to come today," they tell DW. Gautam and Arvind work at a Hindu crematorium in Turbhe, a locality outside of Mumbai in India's western Maharashtra state.

The relatives of the deceased informed Arvind and Gautam that the body on its way is a non-COVID death.

The death report, however, states that the person died from septic shock caused by acute respiratory distress syndrome, a common cause of death among COVID patients.

The relatives didn't conduct an RT-PCR test to detect the presence of the virus after death. They simply informed the crematorium workers that the patient tested negative six days before his death.

The crematorium workers start preparing the pyre for the body. It arrives 30 minutes later in an ambulance. There is a clear breach of COVID protocol, with at least 30 people assembling for the funeral.

According to the government of Maharashtra, only 20 people can attend a funeral. 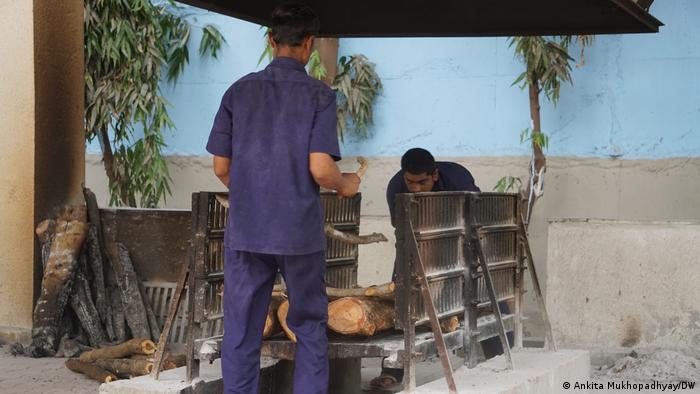 The crematorium workers tell the patient's family that they should follow the government guidelines, but they are pushed away by the deceased's family.

"We try our best to follow all government guidelines. But if the patient's family hits us or threatens us, there's not much that we can do. We are just five people up against 20 to 30 people," says one worker, who didn't want to be named.

Arvind says that there have been many instances when they have cremated the body, and several days later, they are informed that the deceased had COVID.

"It's like we are literally playing with our lives and there is no one to shield us. If we display COVID symptoms and try to get admitted in a hospital, we are turned away as we are 'dirty.'"

Arvind is cleaning the pyres wearing a handkerchief around his face, instead of an N95 mask. Other crematorium workers attend to dead bodies without wearing a PPE kit.

"We aren't seen as frontline workers, so our health is not a priority," he says. 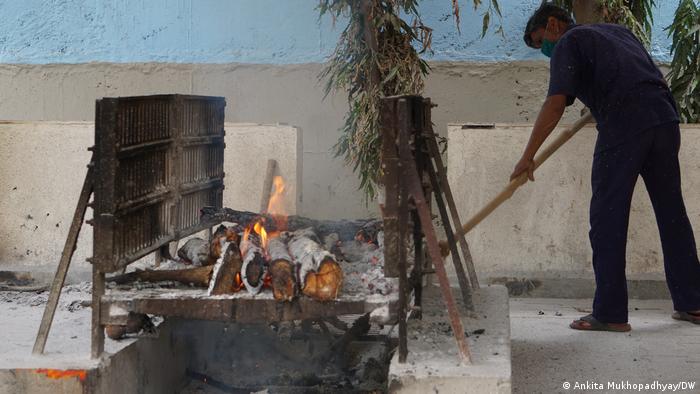 Gautam stokes the flames of a pyre

Their pay would not be sufficient to take care of their healthcare needs if they fall ill.

"For the amount of work these workers do, they are paid just 15,000 rupees (€168) a month. There is no process in place to protect them — both physically and mentally," Deepak Gaikwad, a local social worker, told DW.

"Their jobs are precarious and they can easily be fired as they are contractual labor. They can't even take up employment elsewhere as they haven't gained any considerable skills from this job," he added.

Gaikwad said that last week the workers had received a notice from their contractor that they could be fined or fired if they continued to take "bribes" from the families of the deceased for disposing of the bones of dead relatives. In Hindu culture, it's a custom to collect the bones and immerse them in a holy river.

"Many people don't want to directly touch the bones of the deceased," Gaikwad said. "They pay these workers to collect the bones on their behalf. They also sometimes pay them a token amount out of sheer gratitude for the immense risk they undertake to cremate the bodies," he added.

After people complained to the local municipal corporation, Gaikwad said the contractor, without verifying the information in-person, sent the workers a letter threatening to take away their jobs.

"This has made these workers scared of losing their jobs, at a time when they are already risking their lives every day," he said.

Risk of infection from bodies

Sahil Singh, a doctor at the V-Medica clinic in the city of Gurgaon, told DW that crematorium workers are at risk during every step of the cremation process. 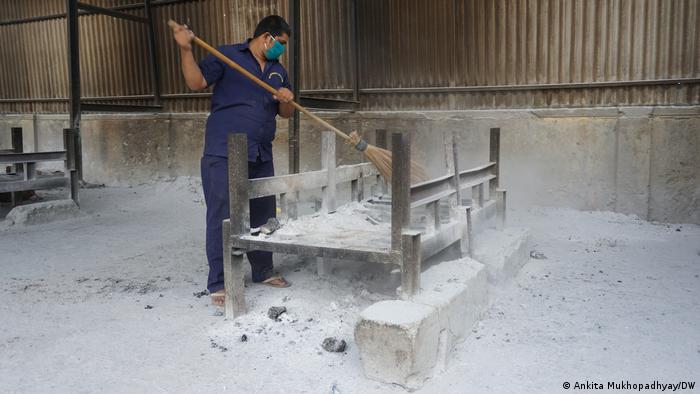 Arvind cleans the pyre after a dead body is immolated

He said there are many transmission risks, such as HIV, hepatitis, typhoid, cholera, and tuberculosis, along with COVID.

He added disease can be transmitted to the crematorium workers if they improperly handle the bodies during cremation, or even pick up the bones with their bare hands.

"If the patient dies from natural causes, it's difficult to determine if the patient was COVID positive," Singh said.

"In that case, the body that comes to the crematorium is unwrapped. This increases the risk of infection for the workers. Even if it's a COVID body, we can't be sure that the body bag is devoid of virus. Bodily fluids contain harmful bacteria and viruses," he added.

"The ambulance is also a superspreader area. The system is so overworked that the ambulances are literally traveling from the hospital to the crematorium and back again. Do you think the ambulance workers have time to sanitize the vehicle each time?" he added.

Singh also pointed out that in places like Uttar Pradesh and Delhi, where mass cremations were taking place, the crematorium workers literally take partially burned bodies off the pyre to make way for another one.

This improper handling of exhumed corpses also exposes workers to dangerous diseases. He added that Muslim and Christian crematoriums, where bodies are buried, also expose workers to infection.

"At several crematoriums, once the body is buried and it deteriorates a little, the workers take out the body and move it someplace else. This body is an infection hot spot," he said.

The Turbhe crematorium workers say that the current wave of the pandemic has taken a toll on their mental health.

"We were working around the clock in March and April. There were literally 20-25 bodies every hour. Ambulances were lined up outside the crematorium. We didn't get time to eat or drink water. Our pay didn't make up for the amount of work we did in those two months," says Arvind, adding that he is afraid of catching COVID.

"I don't know much about the disease, but I have seen the scarred dead bodies. If this is the condition of someone who dies from COVID, then I don't want to be that person. Each day, I wake up wondering if today is the day I'll get the virus," he says.

"If I feel emotionally overwhelmed, I can take one or two days off. After that, I have to come back to work, otherwise, the contractor will deduct my pay," he adds.

"I have been working here for almost 20 years, but I have yet to become a permanent employee. I never wanted to do this job, but economic hardships forced me to take it up. It's the blessings of my family that have saved me from COVID until now."