Why the world depends on India′s vaccine production to beat COVID | Asia | An in-depth look at news from across the continent | DW | 04.06.2021

Why the world depends on India's vaccine production to beat COVID

India's reputation as the "pharmacy of the world" has been bruised by COVID vaccine shortages. However, vaccinating people in developing countries largely depends on getting Indian production back on track. 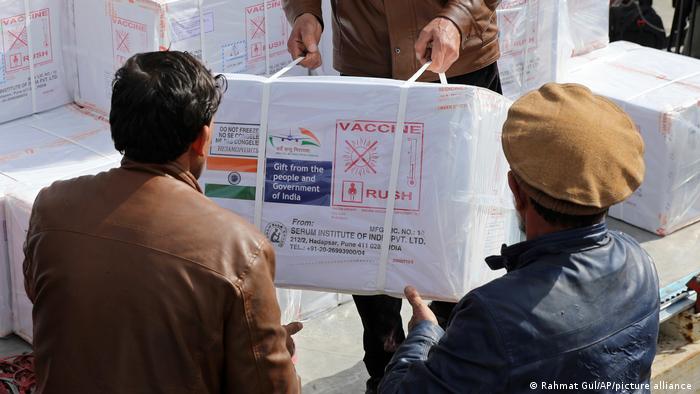 India has shipped millions of COVID vaccine doses around the world

India is a world leader in vaccine manufacturing, and Indian pharmaceutical companies supply more than 50% of global demand for different vaccines needed for global immunization problems.

Before COVID surged in India this spring, Indian vaccine manufacturers like the Serum Institute of India (SII) were supplying developing countries with coronavirus vaccine doses via the World Health Organization's COVAX program.

However, as the pandemic grew out of control at home, Indian authorities were forced to cap exports. Vaccine shortages continue throughout India, and in parts of the developing world that had depended on Indian production.

How India vaccinates the world

There is also concern that as manufacturers play catch-up, the production of other vaccines could be affected.

Pune-based SII is the world's largest vaccine manufacturer by volume of doses it has produced and sold globally.

It is estimated that about 65% of the children in the world receive at least one vaccine manufactured by SII. Its vaccines are used in around 170 countries for national immunization programs, saving millions of lives throughout the world.

"Right now, our focus is ramping up production of Covishield vaccines for the country, which is an emergency," an SII official told DW. Covishield is what the AstraZeneca COVID vaccine is called in India.

"Sure, the focus on other vaccines may have taken a back seat, but it won't be long before we are back to producing vaccines using cutting edge genetic and cell-based technologies," the official added.

The company also owns 145 patents and produces hepatitis B, rotavirus and typhoid vaccines, and is developing vaccines for viral diseases like chikungunya and Zika.

This capacity could be better adapted to manufacture more COVID vaccines, which could supply India and the world with cheap doses.

Virologists and pharmaceutical experts have said that had the Indian government involved more companies in manufacturing, it could have averted the current COVID vaccine shortages while retaining the ability produce other critical vaccines.

"Change is needed and it is a wonder why these [other production] units were not included. We will be condemned to repeat the same mistakes if we do not learn from the crisis that is happening now," T. Jacob John, a virologist formerly with the Christian Medical College in Tamil Nadu, told DW.

"We have to work on a common public-private platform and forget financial competition during these times. Isn't India's reputation as a vaccine king at stake?" he added.

India has several large public sector organizations capable of producing vaccines, but licenses for at least three — the Central Research Institute, BCG Vaccine Laboratory and the Pasteur Institute of India — have not been renewed.

"Our target is to produce around 228 million vaccine vials, but it will take one year for us to start production," Sandeep Rathod, managing director of Haffkine, told reporters.

Indian drugmakers are often able to produce essential medicines at cheap prices. In 2001, Indian pharmaceutical company Cipla was able to offer AIDS medication to African countries for a fraction of the price charged in countries like the United States.

SII developed a vaccine for meningitis, which was made cheaply and distributed across Africa. Over 152 million people received the vaccine by the end of 2013, helping to break the cycle of meningitis epidemics in 26 countries.

"India already supplies a substantial part of the world's vaccines. Given pressure from EU leaders to set up vaccine manufacturing in their own jurisdictions the market may get more crowded in the future, and this is where India's ability to make vaccines cheaper may help," Gautam Menon, a biology professor at Ashoka University, told DW.

"We need to emphasize both quality as well as basic research, because there's no reason why the vaccine innovations that the rest of the world saw could not happen here," he added.

"India has always been a leader when it comes to vaccines," K. Srinath Reddy, president of the Public Health Foundation of India, told DW.

Reddy added that India should not lose sight of its potential, as Indian pharmaceutical companies can still quickly scale production and provide vital vaccines for the world.

If the coronavirus pandemic continues to spread worldwide, vaccines could become ineffective and strains could escape immunity. The right vaccines need to go to the places where they are needed.