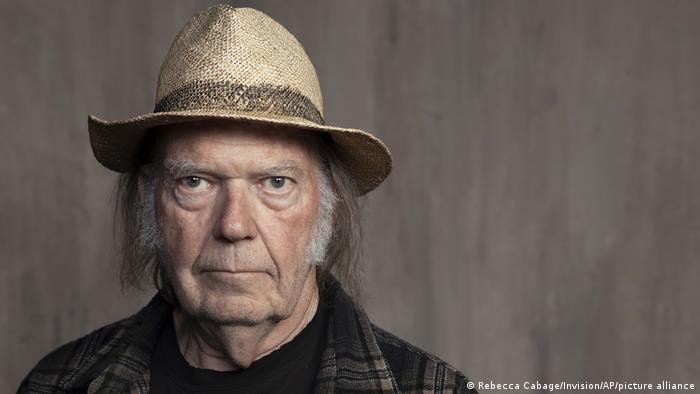 In a harshly worded statement on his website, Young has now had his songs removed from the streaming platform Spotify, despite the fact that the Canadian-American singer stands to lose 60% of his worldwide streaming income.

Young, who advocates COVID-19 safety and prevention, had earlier this week protested the podcast of controversial US podcaster Joe Rogan for spreading misinformation about COVID.

In a since-deleted letter to his manager and record label that was published on his website, Young had stated, "You can have Rogan or Young. Not both."

His original statement drew attention to an issue about which little is known: disinformation on podcast streaming platforms such as Spotify. Young accused the streaming service of spreading "false information about vaccines — potentially resulting in the death of those who believe this disinformation they spread." US podcaster Joe Rogan has long courted controversy, and not just for COVID misinformation

'A menace to public health'

Neil Young, however, is not the first to call out Joe Rogan.

Earlier this month, a group of more than 270 scientists, doctors and nurses wrote an open letter to Spotify, calling on the streaming giant to warn its listeners about some of the views and (mis)information shared by Rogan and some of his medically trained guests who are either COVID or vaccine skeptics.

For instance, cardiologist Dr. Peter McCullough claimed that COVID-19 vaccines are "experimental," and that the pandemic was "planned."

Other Rogan podcasts have questioned the efficacy of COVID vaccines; discouraged young people from getting vaccinated; and alleged that hospitals are falsely diagnosing COVID-19 deaths for financial gain.

"With an estimated 11 million listeners per episode, JRE, which is hosted exclusively on Spotify, is the world's largest podcast and has tremendous influence," reads the open letter that has since garnered more than 1,000 signatures.

Katrine Wallace, an epidemiologist at University of Illinois Chicago School of Public Health and a co-signee of the letter, told Rolling Stone that she considers Rogan "a menace to public health" for consistently peddling anti-vaccine ideology.

"These are fringe ideas not backed in science and having it on a huge platform makes it seem there are two sides to this issue. And there are really not. The overwhelming evidence is the vaccine works, and it is safe."

While the letter did not ask for the podcast itself to be banned, it said that "Spotify has a responsibility to mitigate the spread of misinformation on its platform, though the company presently has no misinformation policy."

Having started off as a music streaming service, Spotify started streaming podcasts in 2018 and has since heavily invested in the sector, where exclusive rights are much easier to obtain.

"In the music sector, that's hardly possible, because musicians and labels want to have broad distribution, and consumers also want music to be available on all platforms," Jürgen Seitz, media scientist at Stuttgart Media University, told DW.

Taking a leaf out of Netflix's book, Swedish company Spotify realized it could set itself apart from the competition by producing exclusive content for users, Seitz said. So, it bought up numerous podcast services such as Gimlet and Podz for more than half a billion dollars and made deals with podcasters, "and so podcasts migrated from the free internet to Spotify's subscription," he said.

And part of this strategy was its biggest podcast investment to date: in 2020, Spotify secured the exclusive rights to the "Joe Rogan Experience" podcast by US stand-up comedian, TV personality and podcaster Joe Rogan, for which the company paid an estimated $100 million (€90 million). The following year it became Spotify's most popular podcast globally.

According to Seitz, there was uncertainty whether acquiring this podcast was an altogether wise move by Spotify "because it was already clear at that time that Joe Rogen had become known for very controversial content, among other things."

And when musicians like Young then threaten to pull their material from the platform in objection to such podcasts, that could prove to be a costly conundrum.

Spotify doesn't have as lucrative a business as the big streaming platforms in the video sector, which is dominated by music labels. It also faces stiff competition from YouTube and Apple.

"And if you add to that the fact that you might have to accommodate musicians, pay them more money for not dropping out, or at the same time have to block certain episodes in the podcast offering, then that's definitely a critical situation for Spotify," explains Seitz.

While platforms like Facebook and Twitter have guidelines for the dissemination of misinformation, podcasts have not yet been scrutinized as closely. This, even though — as the current controversy shows — misinformation is rife here as well.

Audio content can be a potent tool for spreading misinformation, as US researcher Valerie Wirtschafter said in a recent interview with NPR. "The podcaster is in your ear. In that respect, it's a unique relationship. The podcaster gains a certain level of authority and credibility with listeners."

Not only Spotify, but other major podcast platforms have yet to publish guidelines for their handling of misinformation. Apple Podcasts — one of Spotify's biggest competitors — does write in its guidelines that "content that may have harmful or dangerous consequences" is not permitted. However, nothing is written about dealing with misinformation.

The guidelines of Google Podcasts, which is also one of the top podcast providers in the US and Europe, contain a small section on the topic of elections. It states, "If information about elections is out of date or comes from user-generated sources, it may be removed." However, there is no more specific information. 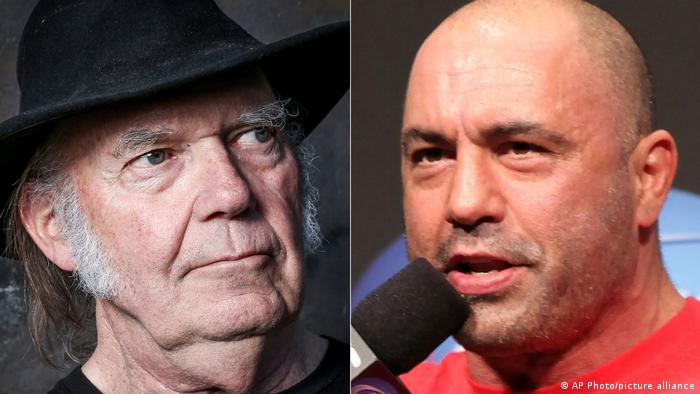 Spotify has cracked down before

To be clear, Spotify has previously removed content from the platform that it deemed dangerous or inaccurate — including some related to COVID.

According to a Digital Music News report from 2021, Spotify has indeed removed 42 episodes of the Rogan podcast, which had featured various controversial guests. This included conspiracy theorist David Seaman, as well as comedian Chris D'Elia, who was accused of sexually harrassing underage girls in June 2020.

Speaking on the investigative Axios Re:cap podcast in August 2021, Spotify founder and CEO Daniel Ek was asked about this and if Spotify has editorial responsibility for its podcasts including that of Rogan's. Ek responded that the company had no plans to take down further Rogan episodes.

"We have a lot of really well-paid rappers on Spotify too, that make tens of millions of dollars, if not more, each year from Spotify. And we don't dictate what they're putting in their songs, either," Ek further said.

Previousy, however, in May 2021, Spotify had removed the song "Little Seed Big Tree" by former Stone Roses frontman Ian Brown, the lyrics of which say people are microchipped through vaccines.

Likewise, in January of this year, former celebrity chef and conspiracy theorist Pete Evans' podcast was removed for COVID misinformation.

In response to DW's queries regarding the current issue with Young and if Spotify plans to formulate a thorough misinformation policy, the company responded with its official statement: "We want all the world's music and audio content to be available to Spotify users. With that comes great responsibility in balancing both safety for listeners and freedom for creators. We have detailed content policies in place and we've removed over 20,000 podcast episodes related to COVID-19 since the start of the pandemic. We regret Neil's decision to remove his music from Spotify, but hope to welcome him back soon."

The company confirmed on Wednesday that it is in the process of removing Young's songs that include hits like "Heart of Gold," "Harvest Moon" and "Old Man." Whether other musicians will follow suit remains to be seen.

At the time of writing, Young's songs can still be heard on Spotify Germany, as can Rogan's podcast.

From Bob Dylan to Bruce Springsteen: Why song rights sales are booming

Selling his song catalog at a reported $500 million, Bruce Springsteen's deal is even higher than Bob Dylan's. But why are music superstars selling their publishing rights?