How to find the COVID-19 facts in a misinformation pandemic | Science | In-depth reporting on science and technology | DW | 02.01.2022

How to find the COVID-19 facts in a misinformation pandemic

There's a lot of information out there about the pandemic, COVID-19 and the virus that causes it, but also a lot of mis- and disinformation. To tell one from the other, it helps to understand how science works. 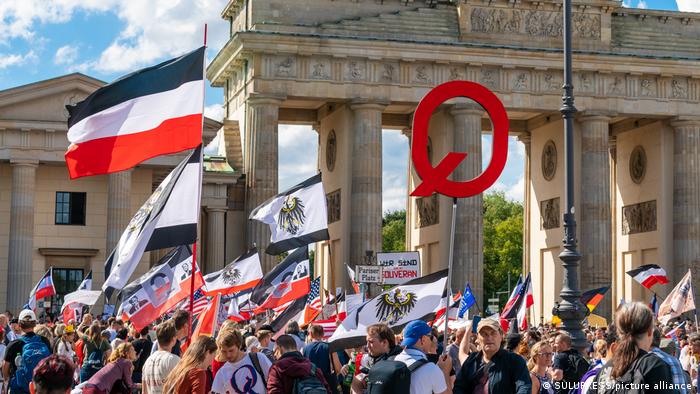 Have you ever been annoyed by the ways in which researchers seem to keep changing the guidance during the pandemic? Or been angry that "alternative experts" don't get the attention they deserve? After all, many of them are doctors and professors of some form, too.

Who can be considered a credible expert? And who can't? Why don't scientists stick with the thing they said a few days ago? In other words: How does science even work?

First, some bad news: Science will never fulfill the desire for truth and definitive knowledge. It doesn't even claim to do so.

"Science is a process in which science is always calling itself into question, which leads to it always correcting itself," said Ulrich Dirnagl, who does research on strokes at Charite Hospital. He and his colleagues are in charge of quality management for biomedical research at the Berlin Institute of Health (BIH) — doing research on research, so to speak.

Should you believe anecdotes?

Though scientific work often leads to further study and revision, not all hypotheses or conclusions have equal weight.

One of the many tales told during this stage of the pandemic goes something like this: "A friend of mine is a midwife and sees lots of miscarriages after women have been vaccinated." These are the kinds of stories that are liable to cause people to give a gasp of horror at first — after all, the woman is a midwife, and should know what she is talking about.

Whether coming from a midwife or not, such an anecdote should at most be a prompt to look into the matter more closely. "An anecdote can definitely generate a hypothesis," Dirnagl said. "But that hypothesis must then be tested in controlled studies if a causal relation is to be established."

No connection between vaccines and miscarriages has been found — and more than 8.7 billion doses of vaccines have been administered globally.

Scientific claims must be subject to scrutiny

It is thus very possible that the midwife's observation derives from a profoundly human mechanism: confirmation bias. This cognitive error causes us to give more credibility to information that ties in with our existing beliefs.

And no one is immune to confirmation bias. "The only thing that helps there is to be one's own devil's advocate," said Roland Imhoff, a social psychologist who does research on the conspiracy mentality. That means deliberately taking the opposite view to the one you hold, he said.

Because scientists are far more aware that they are liable to error than most conspiracy theorists, they will very probably continue looking into the matter of miscarriages. "Organized skepticism is a scientific standard," Dirnagl said. "Because we know that we can make mistakes with our results and our conclusions, we scientists are fundamentally skeptical — about ourselves, as well."

That is why scientific studies or research papers intended for publication in specialist journals have to first be subjected to scrutiny by other specialists in the respective field, through peer review. Even research results uploaded to preprint platforms are critically examined by the scientific community. 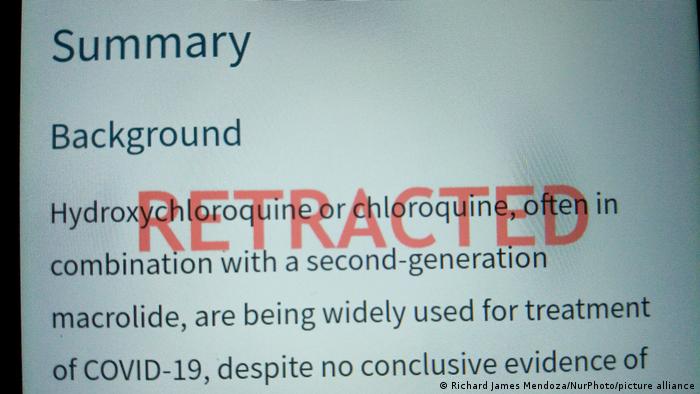 Several studies have been retracted during the pandemic, such as this one on hydroxychloroquine

Though none of these systems is perfect, they increase the probability that errors of method or calculation will be found out.

"Organized skepticism also means that good studies mention their own limitations right at the end," said Dirnagl. For example, the authors might write that the cohort, or the group under examination, was relatively small, that no suitable control group had been possible or that the researchers had been unable to consider certain aspects for whatever reasons.

Dirnagl said scientific transparency also meant publishing studies in a way that permits other researchers to reproduce the results. One swallow does not make a summer, after all.

Coping with people who have fallen down a rabbit hole

Science is not intent on establishing the truth. "It is far easier to reveal a hypothesis as wrong," said Dirnagl. "The assumption that swans are white is valid until the first black swans are sighted."

If the aim of science were to verify a hypothesis — to prove that an assumption is true — then, to stick with our swans, you would have to view all the swans in the world. And it can never be ruled out that those looking for the birds might miss one, even if they were as thorough as could be.

Very few of us are researchers ourselves. Our opportunities for reproducing the experiments and calculations presented in a study are limited. And, even if we were all virologists, we would have little idea about atmospheric physics. Ultimately, it is a matter of trust.

In a study, Imhoff and his colleagues Pia Lamberty and Olivier Klein looked into people's trust in experts. They found that people who were least drawn to conspiracy theories were more likely to trust hypotheses when scientists backed them. The content of the hypotheses played a secondary role.

"For a long time, that was seen as irrational," said Imhoff. But, in fact, it makes a lot of sense. "As a society, we are reliant on creating a consensus and having trust in that consensus," he said.

The virologist Christian Drosten is broadly trusted by Germans because he was involved in the discovery of SARS-CoV-1 — the virus that caused the 2002-2003 SARS epidemic — in 2003, and has since then done research on coronaviruses. He is also behind a number of publications on SARS-CoV-2, the virus that causes COVID-19. Online databases for research work, including pubMed, can help people find out whether the alarming theories presented in the YouTube video their grandma sent them are being dealt with in specialist research on the topic.

"No one is declared pope or made an aristocrat just like that," Imhoff said, referring to the regular accusations by anti-vaxxers and pandemic deniers that only certain voices are heard in particular fields of research. Even Drosten's publications have to hold up under the scrutiny of his fellow scientists. And he is considered an expert only because they do hold up.

Digging around in databases may be more work than most of us would like to do. However, there are a few things that should set off our alarm bells as non-scientists.

"Anyone who announces something as 100% true is displaying dubious scientific behavior," said Dirnagl. "And anyone who comes up with an extreme hypothesis, such as saying that the spike protein is poisonous, should also be held to extreme standards of proof."

And a YouTube video alone does not meet the standards.