The purchase by The New York Times of the production house behind the hit podcast Serial is the latest sign that audio is back in demand. Another leading podcaster, Joe Rogan, has just signed a $100 million deal. 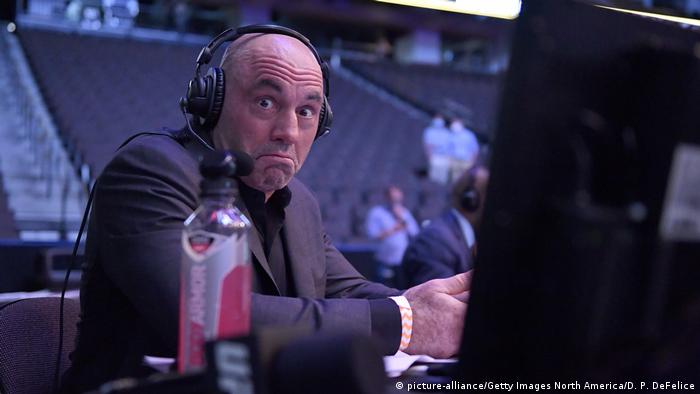 Podcasts have been hyped as the next big thing ever since the MP3 player was invented, yet YouTube — which was born just a couple of years later and with its limitless band of influencers — has created far more millionaires than audio downloads ever will.

Yes, you can make money from podcasting, but until recently, audio was very unlikely to make you very rich. Two recent high-profile deals, however, have given the strongest hint yet that the big money is now chasing podcasting. A handful of people, at least, are about to realize the efforts of their cast-iron belief in the audio medium.

In May, Joe Rogan, who hosts one of the world's top podcasts, signed a $100 million (€85 million) exclusive contract to move his Joe Rogan Experience to Spotify. The deal immediately sent shares in the Swedish streaming giant up 8%. In anticipation of his arrival in September, and further exclusive podcast deals with Michelle Obama, Kim Kardashian and others, Spotify's shares are now trading almost two-thirds higher than two months ago.

Last week, The New York Times acquired the production company behind probably the world's most-talked-about podcast, Serial. Hosted by Sarah Koenig, three seasons of the investigative series have followed cases of alleged injustice that have gripped audiences for the past five years. Industry insiders say the $25 million move for Serial Productions was part of the paper's desire to boost audio and visual content creation in the wake of the newspaper industry's decline.

"It's a clever purchase that will get the most out of both companies," James Cridland, editor of Podnews.net, told DW. "It shows that The New York Times has a focus on long-form audio journalism, and that podcasting is becoming a more important part of its revenue and marketing."

The two respected media firms still have their work cut out if they're to help make podcasting a daily part of our lives. While 73% of the US population uses YouTube every day, just under half of all Americans say they have never heard a podcast. Some 37% have listened to one over the past month, according to research by Infinite Dial, and until this point, just 5% of the US population — some 16 million people — identify as "avid podcast fans." Yes, podcasts are a thing but they have some way to go before they are ubiquitous.

Fortunately, worldwide coronavirus lockdowns have boosted listening and grown the number of podcasts, including in Germany, where Das Coronavirus Update, featuring one of the world's leading virologists, Christian Drosten, has quickly risen to No.1 on the country's Apple podcast chart.

Globally, there are now more than 1.3 million podcasts with nearly 34 million episodes — up by a third since March when the virus first hit most countries and hundreds of millions of people either started working from home, were laid off or furloughed.

Podcasting's "share of ear" — the amount of listening to audio downloads versus everything else — jumped by a quarter during the US lockdowns. Interviews conducted in mid-May by Edison Research also found that podcasting's share of at-home listening in the US was up 44% during the same period.

The latest deals by Spotify and The New York Times are meant to bolster podcasting's potential as an advertising medium. Thousands of podcasters are already attracting large enough audiences to carry ads from big name brands. So much so that by next year, podcasting is predicted to break the $1 billion advertising barrier, according to the latest annual study by the Interactive Advertising Bureau and Price Waterhouse Coopers (PWC).

"Advertising revenue is growing — by 48% in 2019 and is due to grow again this year despite the pandemic," Cridland told DW. He explained that podcasters have hit on a popular way of promoting brands, by having hosts informally read the ads. Hosts will often engage with the products they are advertising, rather than rely on predictable prerecorded commercials like the radio industry.

Podcast producers also have dozens of platforms — including Apple, Spotify, Google, Stitcher, Spreaker, Podbean and Acast — to help their content reach larger audiences. Earlier this month, US satellite radio giant SiriusXM, paid $325 million for Stitcher in an attempt to beat Spotify for dominance of the podcasting arena. As well as its popular app, Stitcher produces more than 50 of its podcasts — including one featuring Conan O'Brien — and owns a company that sells ads on 250 top podcasts.

Amazon, which has, so far, mostly stayed out of the podcasting business but which owns the audiobooks platform Audible, is also reported to be in the market for acquiring a podcast platform to align with its Alexa smart speaker and Amazon Music. It is also said to want to boost its commitment to audio content development.

The sudden interest from big business in podcasting is seen by many in the industry as a blessing and a curse, which could allow already popular brands like Joe Rogan to dominate further, while less-resourced podcasters go unnoticed. Cridland, however, stills sees podcasting as one of the most accessible mediums which will help it remain an "interesting" and "diverse" medium "for rather longer than radio or magazines."

"Unlike other parts of the media industry, podcasting has no broadcasting licenses or scarcity of value — anyone can produce a podcast with just a mobile phone and the gift of the gab," he said.

Millions of people around the world don't have open access to the internet. DW's head of cybersecurity Ingo Mannteufel highlights ways to work around state censorship.