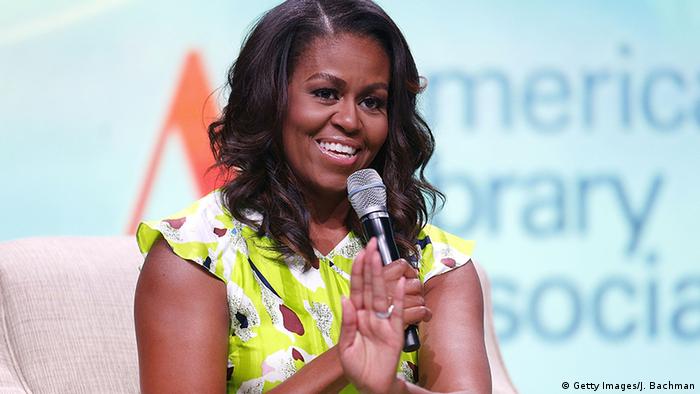 Speaking in the introduction to her podcast "about community, the love that powers our relationships," Michelle Obama set out its wider social and political context before beginning a conversation with former US president and husband, Barack Obama.

"Given everything that’s going on right now, from the killings of George Floyd, Breonna Taylor, Ahmaud Arbery and the ongoing protests and conversations that are testing our patience—and our consciences," she says, "not to mention all the challenges we’re experiencing due to the pandemic, I think that these days, a lot of people are questioning just where and how they can fit into a community."

Also featuring intimate interviews with family and friends like Conan O'Brien and mentor Valerie Jarrett, The Michelle Obama Podcast will try and keep its focus on the personal and community bonds as opposed to politics.

"My mother and brother stop by," she wrote in an Instagram post. "You’ll also hear from many of my girlfriends, the women who’ve always been there with a shoulder to lean on, a perspective to think about, or simply an open line to vent to."

Michelle Obama's commitment to create "a place for you all to dig deeper inside your own lives and relationships" also reflects her ambivalence about politics: As she wrote in her best-selling 2018 memoir, Becoming, which sold nearly 1.5 million copies in the first week and was the namesake for her top-rating Netflix documentary released in May: "I've never been a fan of politics. And my experience over the last 10 years has done little to change that."

Yet despite such political disavowal, she is doubly committed to getting the vote out in the upcoming November presidential election, as shown in her tweet on July 26 - 100 days before the US elections.

The liberal media appear to look to the Obamas' rising celebrity, with a Netflix series also in the works and more books and podcasts to come, as a sign that the current leadership of Republican President Donald Trump has failed to create the same kind of iconic brand as the Obamas during their eight years at the White House – despite Trump's best efforts.

"The eternal and karmic irony is that the Obamas have wound up with the media and celebrity currency; the fame and global adulation that has been ⁦@realDonaldTrump⁩’s life dream, while his brand has been permanently destroyed by his presidency," tweeted MSNBC host Joy Reid.

Under the current partnership with Spotify, the Obamas will “develop, produce and lend their voices” to select podcasts that will be distributed worldwide, Spotify and the Obamas' production company, Higher Ground, said in a joint statement in June.

The announcement followed an agreement between Higher Ground and Netflix that was announced in 2018, and will see the former White House couple produce films, documentaries and other series formats.

Is Barack and Michelle Obama's agreement to produce exclusive content for Netflix part of a quest for world domination by the streaming behemoth? DW spoke to media expert Amanda Lotz about the Netflix boom.

Former US President Barack Obama and former first lady Michelle Obama have unveiled their portraits at a ceremony in Washington. The Obamas hand-picked the two African-American artists who created the large paintings.

More and more Germans are turning their backs on the United States in incomprehension, even disgust. But, says Ines Pohl, it's worth looking closely at the situation because there is much to learn — especially now.