Millions of German bank cards hit by software bug | Germany | News and in-depth reporting from Berlin and beyond | DW | 05.01.2010 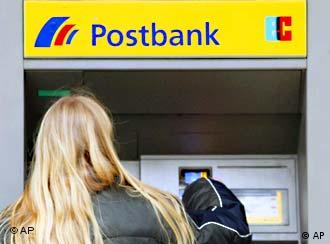 Germans have been struggling to get at their money this year

Officials are calling a software glitch that has rendered millions of German ATM cards useless "a year 2010 problem."

Some customers at major banks including Postbank, Commerzbank and the state-owned Sparkasse outlets have found that their cards no longer work, as software on telling machines cannot recognise the year 2010.

"A piece of software on the affected cards, programmed by our suppliers, is defective, and cannot correctly recognize this year's number, 2010," the German DSGV banking association said on Tuesday.

Telling machines have either been rejecting, or even swallowing, valid debit and credit cards, wrongly presuming them to have expired. As German banks scramble to update their ATMs, the DSVG says the problem should be solved domestically by next week.

However, Germans looking to withdraw money abroad may experience problems for longer.

Customers trying to pay by card in shops have also experienced sporadic difficulties. 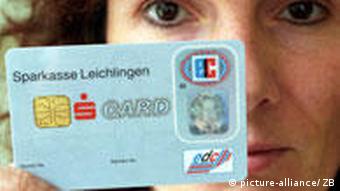 This is a similar problem to the now infamous "Y2K" or "Millennium Bug" that many feared would bring the world to its knees with the advent of the year 2000. In reality, however, its effect was minimal.

The DSGV estimates that roughly 20 million of the 45 million EC ("Euro-Cheque") debit cards, and about 3.5 million of 8 million credit cards whose pertinent data is stored in a microchip rather than magnetic strip are affected.

Many cards have different software and are not a problem. The DSVG also said that some of the more up to date telling machines are able to deal even with the faulty cards.

Germany is slowly phasing in modern microchip credit and debit cards. The changeover from the old magnetic strip technology is expected to be completed by the end of 2010.

Concerns about data privacy have led a number of banks to replace thousands of credit cards. Mastercard and Visa uncovered the security breach after data from a Spanish partner company was stolen by thieves. (18.11.2009)

Deutsche Bank chairman Josef Ackermann says the bank's global staff will share the cost of Britain's tax on bankers bonuses. His comments are the first reaction from a bank to the new tax. (18.12.2009)

German banks have agreed to impose restrictions on managers’ bonus payments a year earlier than planned. The announcement came as other European countries said they were planning a tax on bonuses. (11.12.2009)