The beloved orange-and-black insect is a step closer to extinction due to climate change and habitat destruction, a conservationist group said. Meanwhile, tigers are doing better than expected. 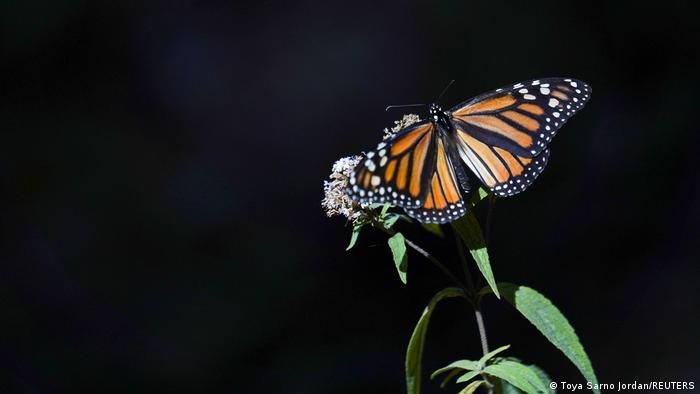 The International Union for Conservation of Nature (IUCN) has included the migratory monarch butterfly on its Red List of Threatened Species and categorized it as "endangered."

The designation is two steps lower than extinction.

"It's just a devastating decline,'' said Stuart Pimm, an ecologist at Duke University who was not involved in the new listing. "This is one of the most recognizable butterflies in the world."

The beloved butterfly is known for its iconic orange and black pattern and its spectacular annual journey of up to 4,000 kilometers (2,485 miles) across the Americas — the longest migration of any insect species known to science.

According to the IUCN, the population of monarch butterflies in North America has declined between 22% and 72% over the last 10 years.

Scientists estimate that the population has shrunk by 85% since the 1990s, when the species was numbering in the millions.

The IUCN, however, did not list nonmigratory monarch butterflies in Central and South America.

Why is the migratory monarch butterfly endangered?

Scientists attribute the decline of the migratory monarch butterfly population to several reasons, one being the destruction of substantial areas of their winter shelter due to logging and deforestation.

Milkweed, the host plant that their larvae feed on, has also been affected by pesticides and herbicides used in intensive agriculture.

Another threat is climate change, with drought, wildfires and extreme temperatures having a significant impact.

Millions of monarch butterflies migrate across the Americas. They spend winter in the mountains of central Mexico or coastal California before they migrate to southern Canada. They breed multiple generations along the way.

"It is difficult to watch monarch butterflies and their extraordinary migration teeter on the edge of collapse, but there are signs of hope," said Anna Walker, who led the assessment of monarchs.

"From planting native milkweed and reducing pesticide use to supporting the protection of overwintering sites and contributing to community science, we all have a role to play in making sure this iconic insect makes a full recovery."

While the migratory monarch butterfly population shrinks, scientists now believe the number of wild tigers is more than previously estimated.

The conservationist group said the rise in numbers is largely because of improved monitoring. The tiger population is also believed to be stable or increasing.

Why we need to save tigers