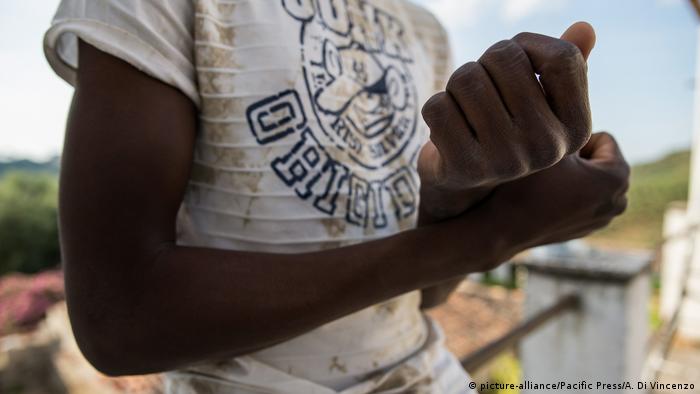 More than three in four migrants between the ages of 14 and 24 report being subjected to forced labor, sexual abuse, child marriage and other forms of exploitation, the UN's children and migration agencies said in a study published Tuesday.

However, the report noted that children from sub-Saharan Africa are most at risk of exploitation, with 83 percent of those attempting to reach Europe via Libya having experienced some form of abuse.

Read more: Two years since Germany opened its border to refugees: A chronology

"If you try to run, they shoot you. If you stop working, they beat," the report quoted Aimamo, a 16-year-old unaccompanied minor from Gambia, as saying. "We were just like slaves."

The UN Children's Fund (UNICEF) and the International Organization for Migration (IOM) said children from outside central and southern Africa are also subjected to exploitation, but to a lesser extent, with 56 percent reporting such incidents.

The agencies said racism likely played a major part in the significant difference between the groups of children and young adults.

Afshan Khan, UNICEF's regional director in Europe, said that European authorities must do more to protect the livelihood of minors and young adults attempting the dangerous journey to Europe through the central Mediterranean.

"The stark reality is that it is now standard practice that children moving through the Mediterranean are abused, trafficked, beaten and discriminated against," Khan said in a statement.

"EU leaders should put in place lasting solutions that include safe and legal migration pathways, establishing protection corridors and finding alternatives to the detention of migrant children."

In May, UNICEF reported a drastic increase among unaccompanied and separated migrant children worldwide, topping 300,000 in 2015 and 2016.