The number of migrants and refugees failing Germany's integration and language classes has risen. Germany's migration office has been under fire for the quality of the courses. 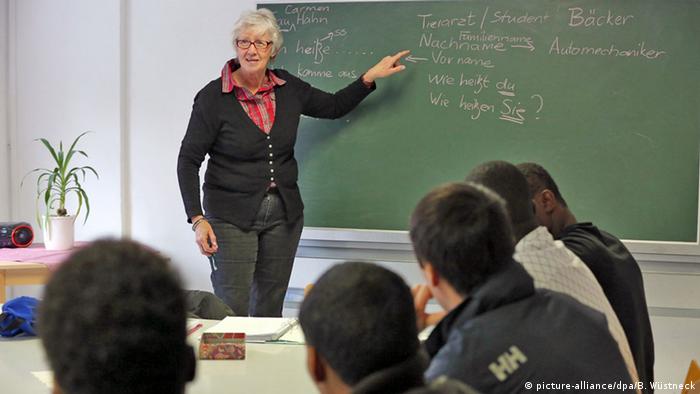 Around 45 percent of migrants taking part in language and integration courses in Germany do not pass, according to media reports citing the response to a request for information by the far-right AfD party.

Of the roughly 202,000 people taking a course in 2018, 93,500 failed, according to government data cited in the Neue Osnabrücker Zeitung daily. One in four failed even after doing additional classes.

The course is aimed at teaching participants a lower to intermediate level of German, classified as B1. It also requires people to sit an exam titled "Life in Germany."

According to figures quoted in daily Die Welt nearly 40,000 of those taking part last year were Syrians, followed by Afghans, Iraqis, Romanians, Turks and Bulgarians.

Nearly 45,000 participants were illiterate when they started their classes.

Germany's Federal Office for Migration and Refugees (BAMF) has been criticized for the quality of the courses, with inspections stepped up.

Media reports say that BAMF ran checks on nearly 90 percent of course providers in 2018, which was one reason for an increase in the office funds despite the number of course participants remaining roughly the same as the year before.

Welt reported Friday that some providers are being sued by the BAMF for fraud and the falsifying of documents. The paper says one course provider is even suspected of aiding and abetting the subreption of citizenship by letting participants pass without the required language skills.

The report says 16 providers had seen their license revoked or not renewed last year. BAMF is to publish definitive figures in May, the paper states.

The report says one issue is that no clear guidelines have been set to assess what constitutes "orderly, regular attendance" of courses, leaving it up to the individual teacher to decide if a participant has attended often enough to pass.