More than half of migrants reported to fail official German test

Around every second migrant in Germany fails the language test at the end of integration courses, a newspaper reports. It suggests a lack of adequate attendance could be one factor in the low success rate. 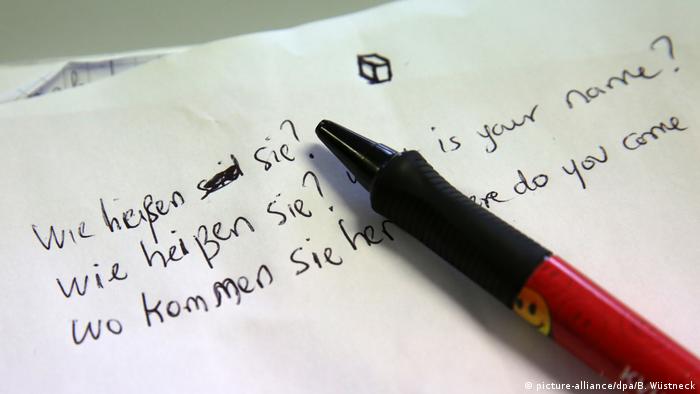 More than half of refugees and migrants to Germany are unable to pass a basic language test at the end of integration courses offered to new arrivals, a newspaper reported on Sunday, citing figures from the Federal Office for Migration and Refugees (BAMF).

The Frankfurter Allgemeine Sonntagszeitung (FAS) said that in 2017, 339,578 people took part in such a course for the first time, of whom 289,751 did the final German test.

Of those, only 48.7 percent reached the B1 standard of the European Reference for languages that is required, the paper said. It said just over 40 percent only achieved the lower A2 level, while the rest failed to come up even to that standard.

After the course, participants are expected to be able to understand a slowly spoken conversation, communicate in simple sentences and understand everyday texts.

In a bid to explain the high failure rate, BAMF told the newspaper that several course participants became ill, while others found employment or moved and were thus unable to take part in the final test.

The report also quoted the director of one adult education institute providing language training as saying that many refugees were still traumatized by their experiences, while others lacked the necessary "learning culture," having never attended school in their native countries.

The FAS also cited a report from the Federal Audit Office stating that many refugees were failing to turn up to enough lessons in language courses offered by the Federal Employment Agency.

It conceded that those courses were not subject to the same strict regulations as those under the supervision of BAMF. However, BAMF did not respond to an enquiry from the paper as to how frequently the adherence to those regulations was controlled and gave no externally verified attendance figures.

Read more: Refugees in Germany: 'I want to integrate, but how?'

The integration courses, which mostly run for six months, consist of two parts: a language course generally made up of 600 lessons, and a subsequent one giving participants insights into Germany's culture, history, legal system and values.

They are offered to non-German nationals who intend to live permanently in Germany, including migrants from within the EU and refugees. The latter are mostly required by German authorities to take part in such a course

People who pass both parts of the course are awarded the "integration Course Certificate.