As migrants try to avoid new penalties for being in Thailand illegally, reports suggest they're being fleeced at the border. Tens of thousands of foreign workers have fled the country in recent days. 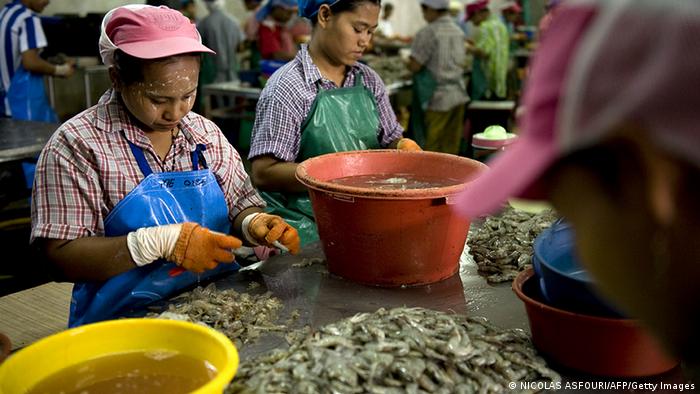 Extorting cheap foreign labor is nothing new in Thailand, migrant support groups say. Traffickers, along with corrupt immigration officials, have for years colluded to overcharge migrant workers as they arrive to take up poor paying manufacturing, food processing and construction jobs.

Mostly the workers themselves - and not their employers - bear the costs of processing entry visas and residency permits which are deducted from their salaries for several months or years after they start work. Despite paying large sums to middlemen, many migrants still find themselves without the correct paperwork and are forced to work illegally.

Thai tourism officials are pushing forward with a proposal to require all visitors to Thailand to obtain travel insurance before entering the country. (06.06.2017)

A Thai court has issued an arrest warrant for an heir to the Red Bull fortune five years after an alleged crime. For the Thai public, the case has come to symbolize the impunity of the rich and powerful. (28.04.2017)

The King of Thailand was the victim of two separate attacks by teenagers with a toy gun, firing rubber pellets. Although he was uninjured, police are investigating a 14-year-old for attempted grievous bodily harm. (21.06.2017)

Authorities in Malaysia have discovered mass graves near camps run by people smugglers in the country's north. The finding comes after 26 bodies were exhumed from trafficking camps in neighboring Thailand. (24.05.2015)

Thanks to a buoyant economy, a large pool of low-cost workers from neighboring Myanmar, Cambodia and Laos, and corrupt officials willing to take advantage of them, more than three million migrants have moved to Thailand in recent years, according to figures from the International Labor Organization (ILO). Some migrant groups say that figure is much higher.

While successive civilian governments have failed to manage the influx, Thailand's military leaders, who seized power in 2014, have threatened a tougher approach. The government's crackdown has spread fear among the migrant population in recent weeks.

Immigration officials have stepped up raids on factories and construction sites where foreign workers are known to be employed. Under a strict new law, rumors circulated that authorities would begin to enforce fines of up to 800,000 baht ($23,557 or 20,731 euros) on firms which hire undocumented workers.

That led tens of thousands of people - both legal and illegal workers - to flee the country in the last 10 days of June alone, to avoid being caught up in the crossfire.

Many migrants fear being arrested and detained for several months, and then being deported permanently, cutting off their vital income stream that supports families back home.

"Workers who may not have access to accurate information are panicking and deciding to return home or (are) surrendering to authorities," Koreeyor Manuchae, project coordinator at the NGO Migrant Working Group Thailand, told DW.

Manuchae said some migrants were forced to bribe immigration officials to be allowed to leave the country without being detained and deported. 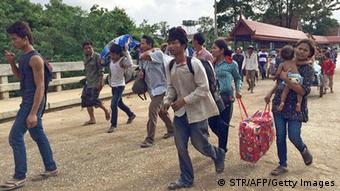 Those leaving are also being overcharged by middlemen to transport them to the nearest border. Police checkpoints along the way will often demand a backhander to avoid arrest, migrant groups told DW.

"We're informed that migrants from Bangkok, for example, are having to pay up to 7,500 baht for the journey organized by a third party," said Manuchae. Normally, a bus trip from the Thai capital to Mai Sot, close to the border with Myanmar, would cost 600 baht.

Thailand has daily penalties for migrants who overstay their visas or sneak into the country illegally, which migration researcher Premjai Vungsiriphisal said many workers couldn't afford to pay.

Vungsiriphisal, who is Senior Researcher and Deputy Director at the Asian Research Center for Migration at Chulalongkorn University​ in Bangkok, says illegal workers are vulnerable to unscrupulous brokers who "charge and cheat them" even as they attempt to return home.

In response to the latest corruption allegations, Thai police chief Chaktip Chaijinda has vowed to punish any officers trying to extort money from migrants or their employers.

The sudden outflow - which immigration officials put at 60,000 just between June 23 and June 28 - has led to long delays at the Thai-Myanmar border.

Similar scenes were witnessed in 2014 when Thailand's military overthrew the government of Prime Minister Yingluck Shinawatra. The sudden coup led thousands of illegal migrants to return home to neighboring Cambodia for fear of being rounded up by authorities.

Several researchers told DW that Thailand's military leaders proceeded with their latest crackdown despite advice from the ILO and other migrant support organizations.

"Before the law was adopted … there was a need to have consultations with employers and workers organizations and receive technical comments (based on international labor standards and good international practices)," said Nilim Baruah, a migration specialist at the ILO's regional office in Bangkok.

With the sudden absence of thousands of workers putting pressure on many Thai companies, the country's military leaders have delayed the implementation of the new law until January 2018 and called for a public hearing to receive input from companies and workers.

Some academics who study the migrant issue say the Thai government must make the country's immigration rules easier and speed up worker registration.

"I believe that most migrants would prefer to work legally in Thailand because they will be better protected by labor laws, but they may not have enough information and do not understand the procedure," said Vungsiriphisal.

He blamed employers for their "unwillingness to follow the laws and take migrants' rights seriously," especially as the registration process is complicated and is fraught with delays.

While the ILO has no direct information on the latest extortion of migrants due to the renewed crackdown, the United Nations' labor agency has previously reported on the huge exploitation of foreign workers in Thailand by agents who promise them work and often fail to regularize their stay.

Some migrant groups argue that rather than imposing harsh penalties on employers, Thailand must do more to root out traffickers and corrupt officials.

While neighboring countries like Myanmar are seeing relatively strong economic growth which is leading to job creation, researchers believe Thailand will continue to be a major migrant destination for some years to come.

"There are jobs in migrants' home countries as a result of ongoing investments and development projects. But they may not be enough to absorb the entire labor force," said Vungsiriphisal.

The ILO's Baruah went further, saying that "countries of origin have a responsibility in creating more decent work opportunities at home so that migration becomes a choice and not a compulsion."

But with salaries at two to three times higher in Thailand than in Myanmar and Cambodia, the temptation to cross the border legally or illegally is still too good an opportunity to miss.