Heavy gunfights broke out in a Sinaloa cartel stronghold after Mexican security forces arrested a son of drug lord El Chapo. The government is struggling to explain why he was released after a storm of violence. 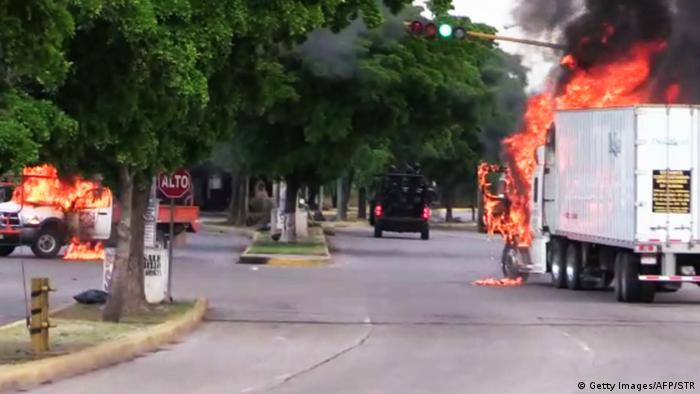 Mexico's president on Friday defended releasing a son of notorious drug kingpin Joaquin "El Chapo" Guzman after security forces were outgunned by drug cartel members when the fugitive was captured.

President Andres Manuel Lopez Obrador acknowledged that the situation "became very difficult" in the northwestern city of Culiacan, when a gunfight between Mexican security forces and drug cartel members rocked the Sinaloa cartel stronghold on Thursday.

"The capture of a criminal is not worth more than the lives of people. They [the security cabinet] made this decision [to release him] and I backed it," Lopez Obrador told reporters at a news conference.

Earlier, Mexican security chief Alfonso Durazo said 30 members of the National Guard and army were patrolling in Culiacan when they were fired upon from a nearby house. Officers repelled the attack and detained four people inside, including a man who identified himself as Ovidio Guzman Lopez

A large group of heavily armed gunmen then surrounded the house.

Violence erupted around Culiacan following news that the police had found Ovidio Guzman. Fires and gun battles broke out throughout the city.

Authorities chose to call off the operation and release El Chapo's son "with the goal of safeguarding the well-being and tranquility of Culiacan society," Durazo said on Thursday.

The less influential of El Chapo's sons, Ovidio Guzman was indicted by a US grand jury in 2018 for distributing cocaine, methamphetamine and marijuana for the Sinaloa cartel.  His father was sentenced to life in prison  in the United States.

Read more: Opinion: Mexico is a country to despair over

Culiacan witnessed hours of gunfire and chaos, during which civilians were forced to run for cover on streets or hide in shops. Burning vehicles blocked the entrances to the city, a common tactic used to make it difficult for police to maneuver.

In videos posted on social media, cartel gunmen were shown roaming the city in trucks with machine guns and other high-caliber weapons. Videos also showed a burning gas station and vehicles set on fire.

Sinaloa's football club Dorados announced that it had canceled its game that day due to security threats. 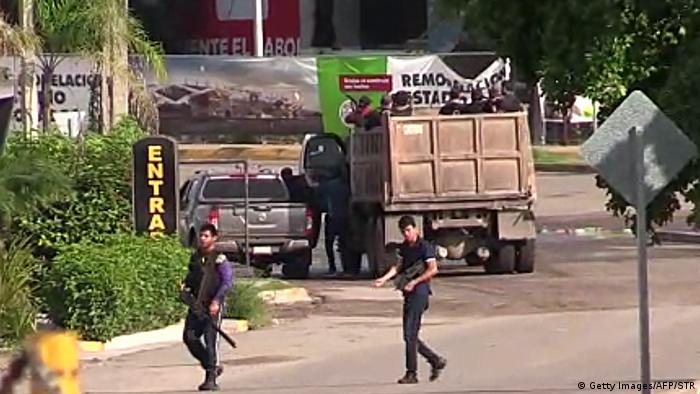 Armed cartel gunmen roamed the streets, setting fire to a number of vehicles and blocking the entrance way of the city

Dangerous and powerful despite arrest

El Chapo is one the world's most powerful drug traffickers.

While in prison, his sons Ovidio Archivaldo and Jesus Alfredo Guzman, known as "los Chapitos," assumed leadership of the Sinaloa cartel together with Ismael "El Mayo" Zambada, a former partner of El Chapo.

El Chapo successfully escaped from prison in January 2001 but was recaptured in February 2014. After only 17 months, he made yet another escape from a maximum-security prison. For a third time, the cartel leader was arrested in 2016 and a year later was extradited to the United States.

More than a dozen police officers have been killed in an ambush in the western Mexican state of Michoacan, authorities said. The Jalisco New Generation drug cartel is suspected of being behind the slayings. (15.10.2019)