More than a dozen police officers have been killed in an ambush in the western Mexican state of Michoacan, authorities said. The Jalisco New Generation drug cartel is suspected of being behind the slayings. 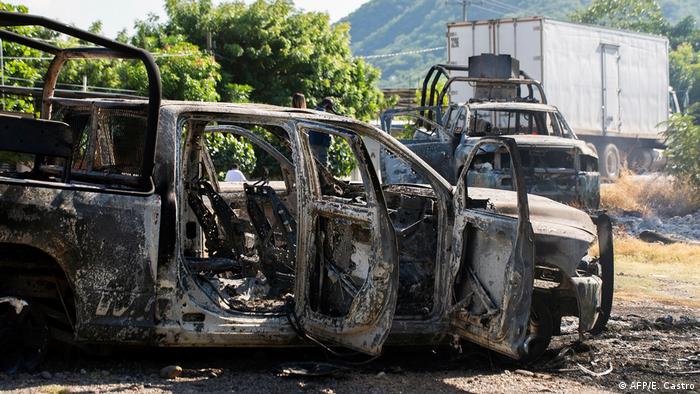 An attack on police in the Mexican state of Michoacan, one of the country's most violent, has left at least 13 officers dead. Authorities said suspected drug cartel hit men were responsible for the murders.

Photos of the crime scene were published on social media on Monday, showing burning vehicles pierced by bullets.

They also showed the bodies of slain officers, who had gone to a home in the town of El Aguaje in Aguililla municipality to carry out a judicial order when "several armed civilians fired on them," Michoacan's state security department said in a statement.

The images also showed large placards reading "CJNG" left on police vehicles. The acronym belongs to the Jalisco New Generation cartel, which has been responsible for the deadly violence in Michoacan linked to turf wars with enemy gangs.

CJNG uses intimidation and bribery to exercise considerable control over local law enforcement, officials have said. The gang's financial muscle has been built in large part on the trafficking of crystal meth.

"No attack on the police will go unpunished, and this was a cowardly, devious attack because they laid an ambush in this area of the road," said Governor Silvano Aureoles.

In 2015, CJNG was also blamed for a series of attacks on police in the neighboring state of Jalisco, in a purported fight to consolidate its control over drug trafficking in the region.

Mexico registered more than 29,000 murders last year, a new record for the country.

President Andres Manuel Lopez Obrador promised to restore peace and order during his electoral campaign. But since he took office in December, he has struggled to fulfill the pledge, with the 2019 murder tally on course to top last year's total.

Fifty-six percent of Mexican territory is seen as dangerous for women. Finding a solution to the increasing violence is not easy, because there isn't a clear pattern to it, writes journalist Anabel Hernandez. (21.08.2019)

In Mexico, criminals do not fear the authorities, but journalists. That’s why journalists are the target of attacks, with eight dying so far this year. Protecting them is an international duty, says Anabel Hernandez (04.08.2019)

Mexico: US journalist shot during interview

A reporter for National Geographic was interviewing a purported drug dealer when an ambush took place. The journalist was shot in the leg, while the alleged dealer and an associate were killed. (06.10.2019)