The corpses were discovered in the state of Michoacan. The Jalisco drug cartel appeared to be claiming responsibility for the killings as part of a long-running turf war with a rival gang. 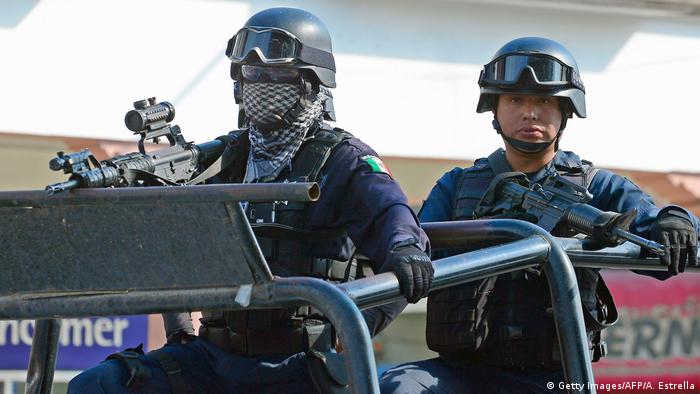 Nineteen bodies were discovered by Mexican police on Wednesday in the western city of Uruapan.

Nine of the corpses were hanging from an overpass, while seven were hacked up and dumped at the roadside, with a further three found nearby.

Rival drug gangs in a so-called "turf war" have been held responsible.

Adrian Lopez, chief prosecutor for the state of Michoacan, said the groups were looking to seize command of the area. "There is a turf war between the (local) cells of different criminal groups. They are fighting for territorial control over the production, distribution and consumption of drugs," Lopez said. "Unfortunately, this conflict results in these kinds of acts that justifiably alarm the public."

Two of those that were hung from the bridge were half naked women. One of the dismembered bodies was also female.

There was a banner alongside the bodies hanging from the overpass which bore the initials of the notoriously violent Jalisco drug cartel, and cited the Viagras, a rival gang. "Be a patriot, kill a Viagra," the plastic sheet read. This intimidation tactic is frequently used as part of the drug conflicts in the region.

Despite spending billions of dollars against the cartels, Mexico has yet to get the violence under control. Thousands of police officers, soldiers, gang members and civilians have lost their lives since former President Felipe Calderón declared war on drug smugglers shortly after his election in 2006.

In December 2016 authorities found six severed heads in Michoacan and a threatening message signed by the New Michoacan Family cartel. The heads were discovered near the borders with Jalisco state, where Jalisco New Generation Cartel (CJNG) operates.

Mexican President Andres Manuel Lopez Obrador has vowed to reduce the bloodshed using a strategy based around a newly launched National Guard, which is assuming the job of fighting drug cartels from the military and federal police.

A crime reporter has been killed in the Mexican resort town of Playa del Carmen, the fifth journalist slain in the country so far this year. He had been under official government protection. (17.05.2019)

'Europe is also responsible for the crisis in Mexico': Anabel Hernández

Anabel Hernández, recipient of the DW Freedom of Speech Award 2019, on corruption in her native Mexico and the ways in which international players bear partial responsibility for the power of the drug mafia there. (27.05.2019)

The punishment meted out to El Chapo gives the impression that justice has been done. But the really important questions were not asked during his trial, says DW's guest columnist Anabel Hernandez. (19.07.2019)