Cartel murders in Mexico have made global headlines again. This time the outrage has been sparked by the brutal killing of three film students. People are protesting across the country, but little is likely to change. 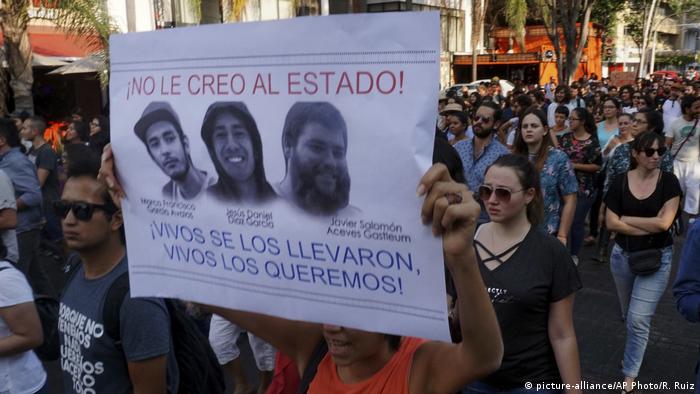 Salomon Aceves was 25 years old and played the drums. Marco Garcia, 20, was always the center of attention at parties. Daniel Diaz, also 20 years old, loved football. He had injured himself playing and was using crutches when he was murdered. The men, all students at CAAV, Guadalajara's university of audiovisual media, were making a film. One of the men had an aunt who was letting them use her house as the location. What they didn't know was that she had connections to a criminal gang. On March 19, they were about to go home when members of Jalisco's Nueva Generacion drug cartel showed up.

According to the police investigation, the students were simply in the wrong place at the wrong time. The gang assumed that they were members of the enemy Nueva Plaza cartel. The three young men were abducted, tortured and killed, and their bodies were dissolved in acid. The crime has triggered a wave of horror in Mexico, where the drug wars have taken a massive societal toll. Last year was the country's deadliest in decades. Thousands of people have been out demonstrating for justice and an end to the violence.

The public prosecutor in the state of Jalisco has had two suspects arrested and anticipates that the investigation will be more or less wrapped up within a month. However, people are dubious about the official version. "I find it hard to believe that three young men carrying film equipment and making a film could be mistaken for members of a drug cartel," said Dawid Bartelt, a representative of Germany's Heinrich Böll Foundation in Mexico. "I don't think we know the whole truth yet." He's not the only one who has doubts. 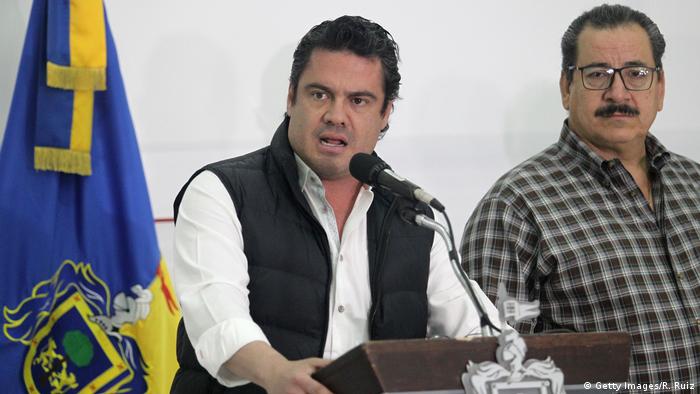 Governor Sandoval promised results, but a wary population is sick of broken promises

The governor of Jalisco, Aristoteles Sandoval, said it was "normal" for people to doubt the results of the investigation, but insisted that authorities had gotten it right. "We've questioned more than 400 witnesses, we've investigated seriously, and the DNA results prove that they were there," Sandoval said of the suspects.

Meanwhile, Mexican film stars have been speaking out. The renowned director Guillermo del Toro, who is from Guadalajara, tweeted: "Words can't explain the dimension of this madness. 3 students are killed and dissolved in acid. The 'why' is unthinkable, the 'how' is terrifying."

The actor Gael Garcia Bernal tweeted: "Such sadness. This nightmare has to end."

The director and actor Diego Luna wrote that he would "vote with my eyes closed for someone who can explain clearly, not with hollow words like those of the debate, what the hell they're going to do to make sure nothing like what happened to these three young men EVER happens again."

Luna's comment refers to Mexico's presidential election on July 1. The Böll Foundation's Bartelt is skeptical as to whether the current outrage will actually have any effect on the political agenda. "Tomorrow another four or five young people will be killed, and then the case of the three young students will be lost in a sea of violence and murder," he said.

"It's not three!" people are shouting at protest marches nationwide. "It's all of us!" The demonstrations, particularly in Guadalajara and Mexico City, have also attracted international attention. "But no one is able to suggest a solution that can actually address the complexity of the problem," Bartelt said. Representatives of civil society, for example, are calling on the state to act. Bartelt said, though, that the government has a serious problem: "Mexico is a democratic country with functioning institutions, and it's a member of the OECD. Nonetheless, there are large parts of the country over which the state has lost control."

What kind of solution might be possible? Bartelt is convinced that the international community needs to be more active: "Germany has more than 2,000 companies investing in Mexico. Part of their responsibility is to do everything possible on the diplomatic front to increase pressure on the Mexican government."