About 80 candidates have been murdered since campaigning for Mexico's 2018 elections began in September. Many have been targeted for opposing drug cartels — or conspiring with them. Sandra Weiss reports from Puebla. 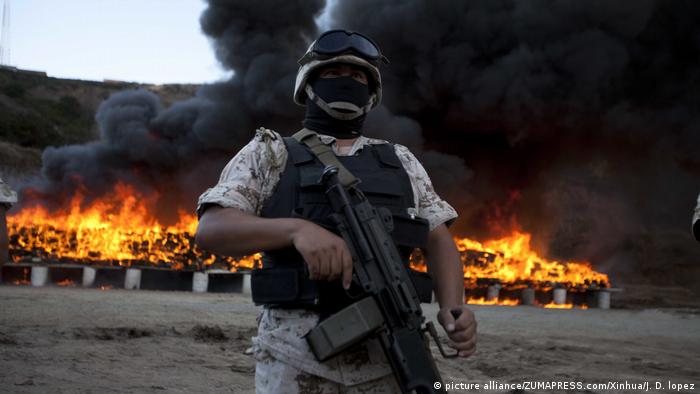 In recent months, about 80 Mexican politicians have been shot, knifed, beaten or burned to death; some have even been dismembered. Last year was the country's deadliest overall in decades, and in most cases the killers remain at large — some statistics put the unsolved rate at 97 percent of Mexico's staggering murder tally — but officials largely blame organized crime for the politicians' deaths. The investigative journalist Jose Reveles said motives included voter intimidation and revenge on leaders who ally with rival criminal organizations or even stand up to cartels. Though the killings of politicians in such large numbers is a relatively new phenomenon, journalists, activists and other noncombatants have long been targeted by cartels.

One thing is for certain: Voters will have fewer choices on July 1, when Mexicans choose a president and legislators. Edgardo Buscaglia, the president of the Institute for Citizens Action in Mexico (IAC) and a research scholar of law and economics at Columbia University in the United States, speaks of an "electoral farce" following the killings. And the national mayors association, the ANAC, has reminded authorities that, unlike national lawmakers in Mexico City — who are protected by bodyguards and go to work in the relatively secure Saint Lazarus Legislative Palace — local leaders find themselves in consistent mortal danger. One hundred and seventy-two have been killed since 2006, when Mexico launched its war on drugs, Reveles said. Just last year, Mayor Robell Uriostegui had to be evacuated by military helicopter from Teloloapan after he was surrounded by members of an organized crime group.

"Narcopolitics isn't some vague threat," Reveles said. "It's a reality." He estimates that about 45 percent of all municipalities in Mexico are controlled by organized crime and that the numbers will only get worse.

Mexico has a "weak state, co-opted by the mafia," Buscaglia said. Citing a report by Global Financial Integrity, he added that the country has "the third largest underground economy — after China and Russia."

For a long time, authorities simply ignored this phenomenon. But, in recent days, there have at least been condemnations and assertions about addressing the problem. The newspaper Milenio reported that the national electoral institute had received calls for help from candidates running for parliament. "The authorities were urged to take action," the newspaper reported.

Luis Raul Gonzalez, the president of Mexico's National Human Rights Commission, demanded that security protocols be instated. But that probably will not suffice, given the huge number of candidates running in the elections to fill more than 18,000 positions at all levels nationwide. Protecting every candidate will hardly be possible.

"The number of infiltrated municipalities is growing, and state institutions are increasingly in cahoots with criminal networks, but there is neither a strategy to stop this, nor are there enough capable investigators," said Edgar Cortez, of the IMDHD, an NGO focused on human rights and democracy in Mexico. And the violence will merely increase if perpetrators are not bought to justice. In the state of Guerrero, where the largest number of candidates have been killed so far, a desperate bishop took matters into his own hands, meeting cartel leaders in an effort to stop the bloodshed.

Municipalities are the weakest link, the journalist Reveles said. He argues that the cartels are not just looking to control smuggling routes but also to secure government contracts for the purpose of laundering money. That is why, Reveles said, they install cartel-friendly police commissioners, town treasurers, district council presidents and mayors — and get rid of anyone who opposes them.

In Mexico, candidates are designated by party leaders without consulting rank-and-file members. "The non-transparent way candidates are announced and parties are financed, and the lack of checks through the judiciary or tax authorities, mean cartels have an easy time influencing politics," Buscaglia said.

Insiders estimate that campaign financing is often 10 times what it is allowed to be. But there's hardly ever a paper trail — "because almost all payments are made in cash, handled in suitcases or egg cartons," as one campaign helper told DW.

Experts doubt that there will be improvements anytime soon. "None of the candidates have presented a cogent program to tackle crime," the IMDHD's Cortez said.

Buscaglia suspects that necessary measures such as party primaries to choose candidates, effective auditing and ensuring an independent judiciary "are unpopular with leading candidates" because that would weaken the power of parties and cartels, alike.