Rights groups have called on Mexican authorities to combat impunity, saying violence will continue "until that changes." With more than 100 journalists killed since 2000, Mexico is set to break another tragic record. 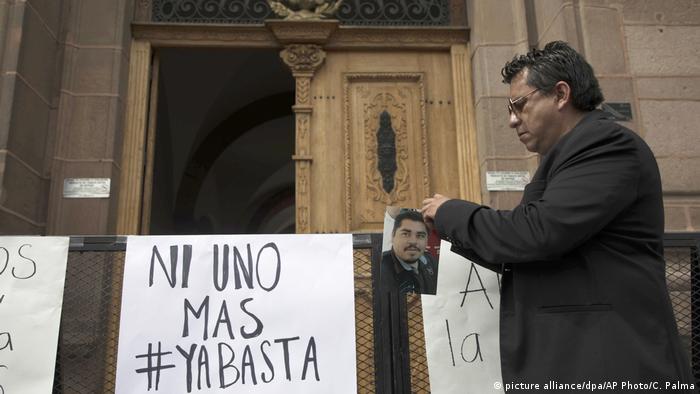 Signs posted in front of the State House in San Luis Potosi called for an end to impunity, saying: "Not one more, it's enough"

Authorities in the Mexican state of San Luis Potosi said the bullet-riddled body of 23-year-old photojournalist Edgar Daniel Esqueda was discovered on Friday near the state capital's airport, bound and showing signs of torture.

Witnesses told the Mexican press freedom advocacy group Articulo 19 that the assailants told Esqueda they were police officers after he asked for their identity.

Read more: Mexico: Is the state spying on journalists?

The San Luis Potosi police department denied any involvement via Twitter, saying "there has not been any police action against a reporter in the (state) capital."

Over the past year, Esqueda made several reports to Mexico's federal protection program about police harassment. San Luis Potosi Governor Juan Manuel Carreras said one line of investigation included the possible involvement of "public officials" in the photojournalist's death.

Read more: Opinion: Mexico, where freedom of the press is being killed

Esqueda was the 11th journalist killed this year, matching the total in 2016, considered the country's highest number on record. Press freedom groups have warned Mexican authorities of the dire consequences of failing to combat rising violence against journalists. 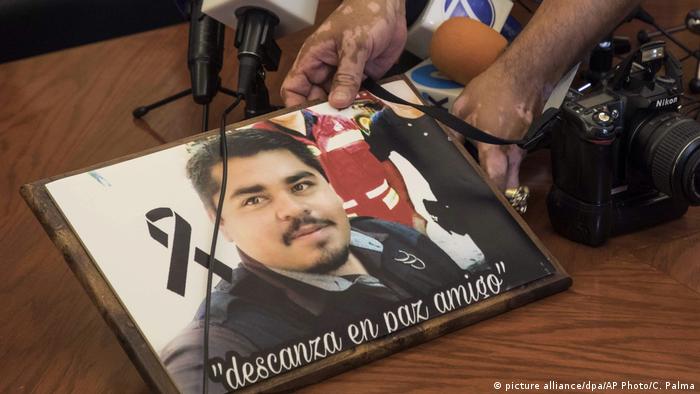 Esqueda's colleagues gathered in protest before the start of an official press conference, demanding justice for his murder

Alexandra Ellerbeck, who serves as program coordinator for North America at the US-based Committee for the Protection of Journalists, called on the authorities to protect journalists by combatting impunity.

"Criminals, sometimes connected with state actors, know that they can get away with killing journalists in Mexico because of chronic impunity for these crimes. Until that changes, the violence will continue," said Ellerbeck.

"Mexico is one of the most dangerous countries in the world for journalists. If the Mexican government is as committed to press freedom as they claim to be, they must prevent future kidnappings and killings," she said.

Since 2000, 111 journalists have been killed in Mexico, with more than 90 percent of the cases unsolved. More than 180,000 people have been killed and over 30,000 others disappeared since the government declared war against the country's powerful drug cartels 11 years ago.