A Mexican newspaper published near the border to the US closed its doors due to violence against journalists throughout Mexico. A reporter who had worked for the paper was shot dead last month. 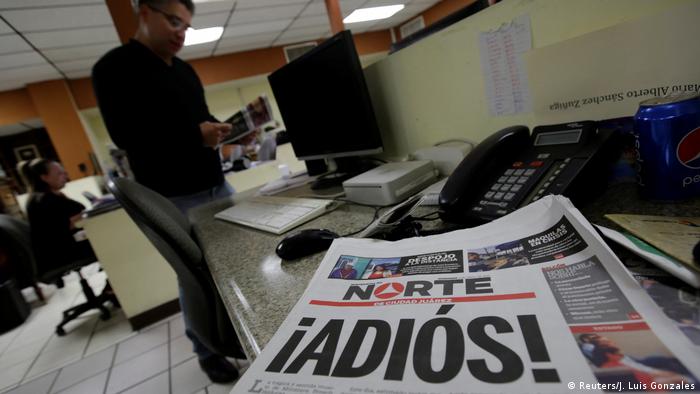 The "Norte de Ciudad Juarez" newspaper announced Sunday that it would stop publishing its print version after 27 years of existence in the border city of Ciudad Juarez.

In a farewell in the final paper and on its website titled "Adios!" (Goodbye!), the paper's director, Oscar Cantu Murguia, said the decision was made "due to the fact that, among other things, there are neither the guarantees nor the security to exercise critical, counterbalance journalism."

Cantu discussed the murder of Miroslava Breach, a "Norte de Ciudad Juarez" collaborator and reporter for national newspaper "La Jornada" (The Working Day) in his decision to close the paper.

Breach covered organized crime and was shot multiple times in the head on March 23 in her car in the city of Chihuahua, which is in the same state as Ciudad Juarez.

In addition to Breach, two more journalists were killed in Mexico in March.

Reporters Without Borders (RWB), a France-based organization that advocates for freedom of the press, ranked Mexico 149th out of 179 nations in press freedom in 2016.

Primarily due to violence stemming from drug cartels, RWB said Mexico was "the western hemisphere's deadliest country for media. Murders of journalists are typically carried out in cold blood, like executions, and almost always go unpunished."

RWB reported 10 journalists were killed in Mexico in 2016.

Takeaways: How Latin American journalists can protect themselves

Journalists in Mexico and Central America lead dangerous lives. At a recent DW Akademie media dialogue 12 media workers discussed ways to protect themselves and came away with seven key points to consider. (07.12.2016)