In a further erosion of Germany's political mainstream, the Bavarian conservative party, the CSU, has lost its absolute majority. Meanwhile the Greens have become the second-largest political force in southern Germany. 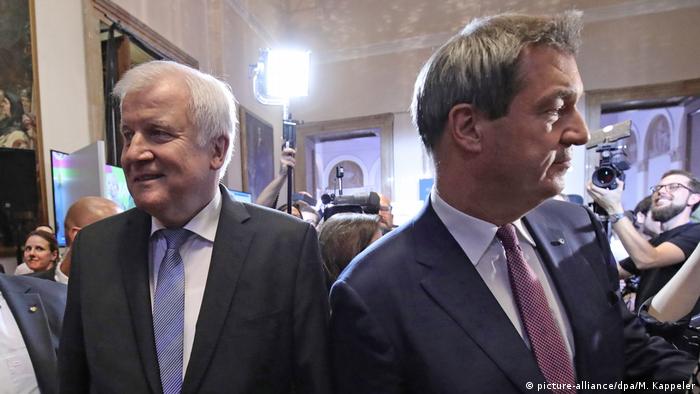 The Christian Social Union (CSU) won the most votes in Sunday's regional election in Bavaria, one of Germany's conservative heartlands. But for only the third time in post-war history, Bavaria's dominant political force will have to share power.

According to preliminary results, the CSU lost its absolute majority in the southern German state, taking 37.2 percent of the vote. The Greens earned the second-largest share of the vote with at least 17.5 percent. They were followed by the right-leaning Free Voters with 11.6 percent and the far-right populist Alternative for Germany (AfD) party with 10.2 percent. The Social Democratic Party (SPD) continued to decline in popularity, getting only 9.7 percent, while the business-friendly Free Democratic Party was projected to clear the five-percent hurdle needed for parliamentary representation. Those figures varied as more and more votes were counted, with the CSU making slight gains and the SPD minimal losses.

According to early estimates, the CSU garnered between 74 and 83 of the 192 to 200 total seats in the regional parliament, far short of the party's previous absolute majority. But the complex calculations concerning parliamentary seats were set to continue into Monday.

In search of a partner

"Of course it's not easy to separate ourselves from what's going on nationally," a noticeably somber Bavarian State Premier Markus Söder said after the results were announced. "The main priority is to form a stable government for Bavaria as quickly as possible, and we accept that task."

Those results leave the CSU needing a coalition partner if it is to continue to govern Germany's largest territorial state. Söder could opt to form a two-party partnership with the left-leaning Greens, although both parties have expressed reservations about such an arrangement.

A more conservative option would be a deal with the Free Voters — Söder strongly hinted that this was his preference. The CSU has ruled out any partnerships with the AfD. Official results will be published later on Sunday or Monday.

The CSU will now lick its wounds after losing more than 12 percent of its vote from the last Bavarian election in 2013. And analysis will begin about what Sunday's result means for the CSU's much larger conservative sister party, the CDU, and its chairwoman, Chancellor Angela Merkel. 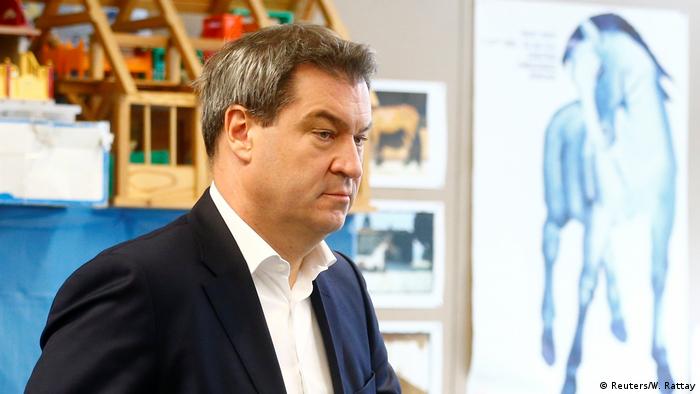 On the surface Sunday's result might seem like a disaster for Germany's embattled leader, but the effect for Merkel may actually be positive in the short term.

The CSU — particularly party chairman Horst Seehofer, who is also Germany's interior minister — has been highly critical of Merkel's welcoming policies toward asylum-seekers and largely excluded her from election campaigning. Thus, the CSU's poor showing can be read as a voter rejection of that position. And the CSU may well avoid the sort of provocations and disruptions that marred the first six months of the current Merkel administration.

Speaking in Berlin, the secretary-general of Merkel's CDU, Annegret Kramp-Karrenbauer, blamed the poor conservative showing on recent "quarrels" within the governing coalition, a finger clearly pointed at Seehofer and the CSU.

But dramatic losses in the most reliably conservative part of Germany don't bode well for Merkel in the medium to long term. Many on the right worry that Merkel's own CDU could suffer similar declines in regional elections in the state of Hesse on October 28. The latest polls suggest that the CDU could struggle to break 30 percent in that vote.

And the historic dominance of Germany's major conservative bloc may be coming to an end. Since 1974, the CSU share of the vote has been nearly halved. 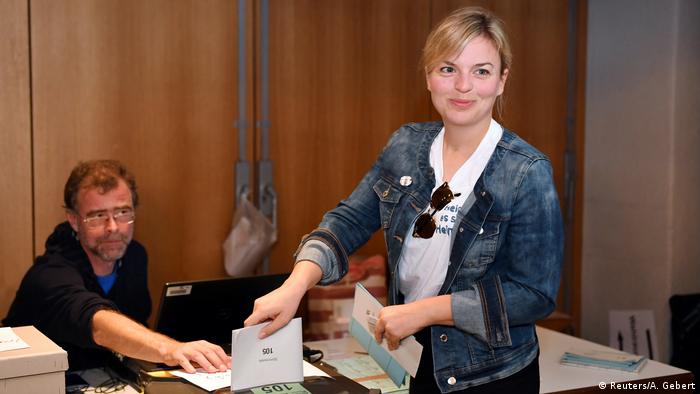 A sea change on the left

One trend evident from Sunday's results is that the smaller parties continue to eat away at the support for Merkel's conservatives and their national coalition partners, the Social Democrats.

The Greens more than doubled their share of the votes on Sunday compared to the 2013 Bavarian election. With the environmentalists also leading the government coalition in neighboring Baden-Württemberg, they can now legitimately claim to be the preeminent political force on the left in southern Germany.

"We wanted to finally get a two-digit result in Bavaria — thank you so much," an ebullient Katharina Schulze, the co-leader of the Bavarian Greens, said at the party's post election celebration. "This result has already changed Bavaria."

"The Green Party is the liberal antidote to the right-wing AfD," political scientist Arne Jungjohann told Deutsche Welle. "The Greens achieved a historic performance in Bavaria, because they attracted almost as many votes from CSU (200,000) as from SPD (210,000). The CSU strategy of fishing for right-wing voters backfired as it lost most of its voters to the Green Party."

The Greens are also polling up to 18 percent in Hesse, which would be a best-ever result in the central German state. That, say analysts close to the party, is because the Greens have proven themselves as part of a number of regional governments and have a clearly identifiable message.

"Voters know what Greens stand for," says Jungjohann. "They view the party as reliable and stable."

That may help compensate for the disappointment, should the Greens not form part of the next Bavarian government.

The environmentalists' mercurial rise has been accompanied by the precipitous decline of the SPD, traditionally Germany and Bavaria's second-strongest party. Social Democrats now have good cause for worry that they may lose their national predominance on the left to the environmentalists as well.

"Congratulation to the Greens, who were the true winners of the election," SPD national chairwoman Andrea Nahles said in a remarkably terse and downbeat statement. "There's no doubt that one reason for our poor performance in Bavaria was the poor performance of the grand coalition in here Berlin."

For the AfD, Sunday's results were mixed. On the one hand, the right-wing populists are now represented in all but one of Germany's 16 regional parliaments and have every reason to expect that they will earn seats in the final remaining one, Hesse, later this month.

Moreover, Social Democrats and conservatives in Bavaria lost around 22 percent of their support — bad news for the AfD's archenemy Angela Merkel and good news for the far right. 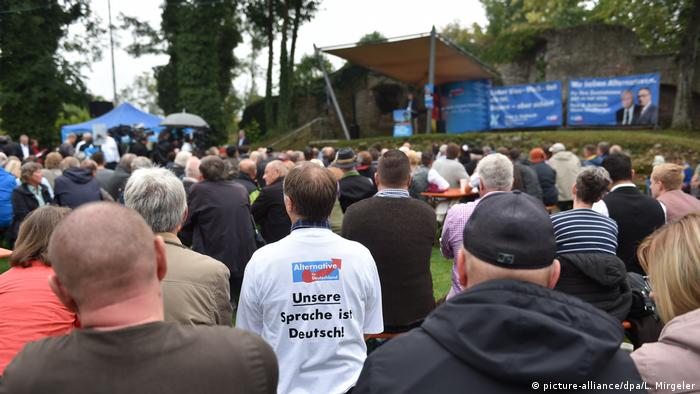 'Our language is German' was one AfD message, but it didn't attract as many voters as hoped

"Those who voted for the AfD in Bavaria were also saying 'Merkel must go,'" AfD co-leader Alice Weidel said in Berlin. "33 percent for the CSU and 10 percent for the SPD. That's a mini-coalition, not a grand one. The partners in the national coalition should clear the way for fresh elections."

On the other hand, the AfD might have hoped for a greater share of the vote in one of the most conservative parts of Germany, where voters have traditionally been skeptical about what are perceived as foreign influences.

Part of the AfD's difficulties may have been the lack of a charismatic lead candidate and the reticence of Catholic voters in the face of some of the populists' more hard-line positions. The Free Voters, who beat out the AfD for third place, likely also siphoned off some conservative voters disgruntled with the CSU.

Whatever the reasons, the Bavaria vote seems to have slightly slowed, if not halted, the AfD's momentum. The success of the Greens shows that there are alternatives to the traditional political mainstream on both the left and right in Germany, and that the mood of the German populace has turned decisively against the national partnership between Germany's traditional powerhouses, the CDU/CSU and the SPD.

Why the Bavarian election matters for Angela Merkel

Much is at stake for Angela Merkel in Bavaria's state election. A poor result for her conservative allies could lead to more government instability. But the election also signals bigger changes in German politics. (13.10.2018)