Merkel urged to include 'Digital Minister' in her next cabinet

A single "digitization ministry" is wanted by German industry as part of the next government. They warn Chancellor Angela Merkel that her next coalition can no longer spread digitization across four portfolios. 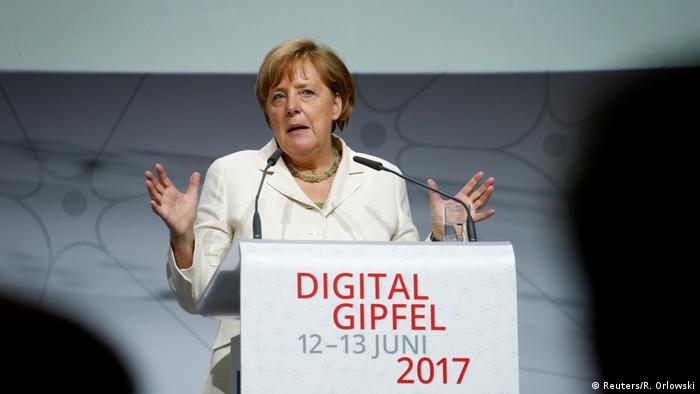 In their joint online appeal to Merkel's intended coalition, heads of electronic groups such as Bitkom, the association Deutsche Startups, and Germany's Internet business federation, eco, said Germany risked "fatal" consequences if its efforts were not focused.

Although promised, neither a single ministry, nor a cabinet post for digitization had emerged in last week's coalition agenda agreed between Merkel's conservatives and center-left Social Democrats, the lobbyists said.

"Our schools and universities are stuck in the Cretaceous Age. Government and administrations work analogue. There are a lack of impulses to effectively expand the broadband infrastructure and German industry is looking in vain for internationally competitive framework conditions," said the appeal's authors.

"The further splitting of responsibilities in the digital sector across at least four ministries risks prolonging the standstill of the past four years, said Startups chairman, Florian Nöll.

"France declared itself to be a start-up nation. Germany creates a 'Heimat' Ministry. That's not the way to create a future," said Nöll, referring to an expanded Interior Ministry portfolio foreseen in Merkel's next intended cabinet.

'More than a door nameplate'

"We need a Minister of State for Digitization – more than just a doorbell nameplate," said Achim Berg, president of Bitkom, a German federation whose 2,500 corporate members have several million employees within Germany's electronic sector.

Berg said a digital minister should have the power to check legislative initiatives and to examine existing laws for the digital compatibility.

"We must really get into gear. Part of this is getting rid of the chaos over responsibilities in the federal government forever," Ohoven said.

Read more - Educators: Germany should invest in teaching before tech

Since the formation of SAP, the software producer headquartered near Heidelberg, in the 1970s ,Germany had not created a world-leading enterprise, said technology investor Frank Thelen.

"It's not just about broadband expansion, but especially topics such as artificial intelligence, encryption, e-government and much more," Thelen said. "Without a strong Digital Minister we will lose connection."

Bitkom: Digitalization to wipe out millions of jobs in Germany

Millions of workers in Germany will likely lose their jobs and be replaced by robots and AI algorithms by 2023, German IT association Bitkom said in a study. The group urged politicians to take the issue more seriously. (02.02.2018)

At the International Green Week trade fair in Berlin, German farming takes center stage. Like many industries, agriculture is grappling with digitalization, and as DW found out, it needs faster internet to cope. (23.01.2018)

Donald Trump teases a presidential run in 2024 28m ago

Iran turns down nuclear talks with US 48m ago