Germany in the digital slow lane | Business | Economy and finance news from a German perspective | DW | 09.06.2017

Germany in the digital slow lane

The German economy believes it is a pioneer in such topics as Industry 4.0 and the internet of things. But during the yearly "digital summit", experts disagree with the German government on the success of digitalization. 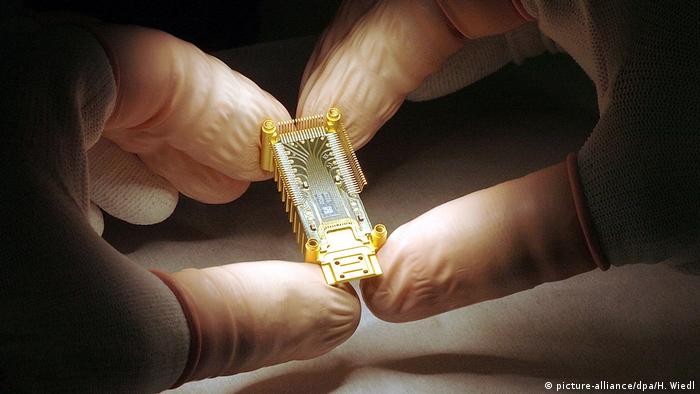 The two-day congress which used to be called the National IT Summit, has once again been able to attract many famous names. Organizers expect Chancellor Angela Merkel, Economics Minister Brigitte Zypries, Interior Minister Thomas de Maizière and Transport Minister Alexander Dobrindt to all attend.

This congress, which has been held annually since 2006, is meant to bring together ideas to help develop and strengthen Germany as an IT hub. Less than two months ago the German government lauded itself for its digital agenda, and said it was satisfied with the progress made so far.

But in order to establish the path forward, participants need to have a look back and take stock of what has been achieved - the route to digitalization and the development and expansion of communication networks. This retrospective appraisal is rather humbling.

The "World Competitive Ranking" from the IMD Business School in Lausanne, Switzerland, tells a different story about the state of digitalization in Germany. The annual ranking calculates the competitiveness of 63 industrialized countries; and this year for the first time digitalization was included as a factor in their calculation.

The result: Germany, the biggest economy in Europe, landed in 17th place for digitalization. This despite the fact that the German economy believes it is a pioneer in such topics as Industry 4.0 and the internet of things. 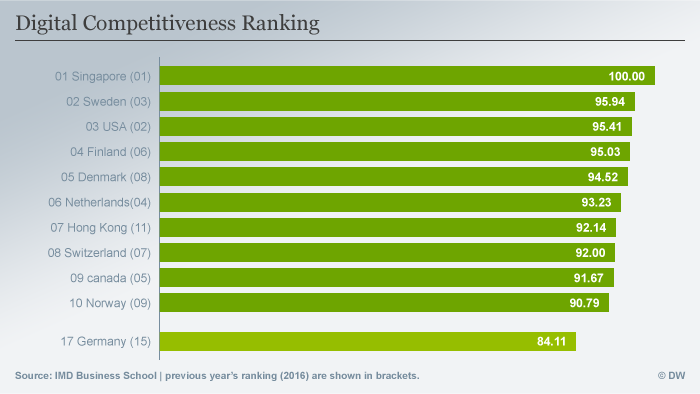 As a matter of fact, the majority of German CEOs are preparing for the growing digitalization of their companies. Sixty-one percent assume that the trend towards the use of a networked system will change their internal production and service chains.

A study from the Institute for Employment Research (IAB) in Nuremberg shows that around two-thirds of CEOs even see a trend towards digital networking between their firms and suppliers and customers.

Or is digitalization irrelevant?

This assumption is questionable: A large portion of the 12,000 companies surveyed still believe that digitalization is not important for them for the time being. Ten percent expect Industry 4.0 to not bring any changes to their internal processes over the next five years. Another 29 percent said that for now digitalization is "irrelevant" for their production or services.

Are Germany's CEOs in a digital hibernation? Perhaps, but only to a point. Many companies have already initiated important processes for the digitalization of production and services.

However, many business executives complain that politicians are too hesitant in their approach to the basic requirements needed for the digitalization of the economy, including nationwide broadband coverage.

There's no escaping the power of networks

Networks are everywhere - from face-to-face to social networks, transport, study and business networks. And the digital network has become our new overlord. Authors Chris Brinton and Mung Chiang tell us how it works. (05.05.2017)

A public-private consortium has bought 50 megabit internet to 75 percent of Germany, now it wants a gigabit network. The network will be a mix of technologies including fiber and 5G. (07.03.2017)

Smooth surfing for everyone

Transport Minister Alexander Dobrindt, who is also the minister of digital infrastructure, only recently released his plan for the further expansion of broadband networks. Up until recently only 1.3 billion euros ($1.45 billion) have been spent for the expansion of the networks with a further 935 million euros allocated this past March.

One big question though deals with Deutsche Telekom, the former telephone monopoly. Some are accusing it of standing in the way when it comes to the expansion of really fast networks. In March, a court in Cologne backed Deutsche Telekom's use of the controversial VDSL technology. The court dismissed several complaints against a decision by the Federal Network Agency (BNetzA) which gave Deutsche Telekom the green light to expand the use of this technology.

Since VDSL runs via cable, only a single supplier can provide service, thus stifling competition. This is the reason why competitors are opposed to the use of this technology. Critics also emphasize that VDSL is not really a promising technology for the future since it delays the expansion of the fiber optic network.

A glance around Germany shows that many rural regions are still cut off from fast internet connections. In some of these areas, less than 10 percent of households currently reach the government's target bandwidth capacity.

Shortage of skilled workers at an all-time high

Additionally, in order to make a digital economy possible, skilled workers must be found. In Germany, the shortage of mathematicians, computer scientists, natural scientists and engineers has reached a record high.

In April, companies were unable to fill 237,500 such positions. Nearly 40 percent of the unfilled jobs are in the IT sector. According to the Cologne Institute for Economic Research (IW) this is a 38.6-percent increase over the previous year and the highest level since the survey was started in 2011.

Thomas Sattelberger, director of an initiative to promote the branch, is convinced that the unfilled jobs hole would be much bigger without foreign specialists. Since 2013, the number of foreigners employed in the so-called STEM jobs has increased by 43 percent; Indians make up the largest block within this group.

To ensure that the deficit of skilled workers does not continue to grow further, immigration needs to be encouraged. A way that would allow non-academics from abroad to look for these types of jobs in Germany would be a good start.

Berlin a magnet for unruly start-ups

This year at the Cube Tech Fair in Berlin, it's been all about more digital connectivity and artificial intelligence. Hundreds of start-ups from around the globe presented their future visions. (12.05.2017)