German Chancellor Angela Merkel has told the Munich Security Conference that multilateral efforts are needed to cope with current challenges. She stressed that NATO was in the interests not only of Europe, but of the US. 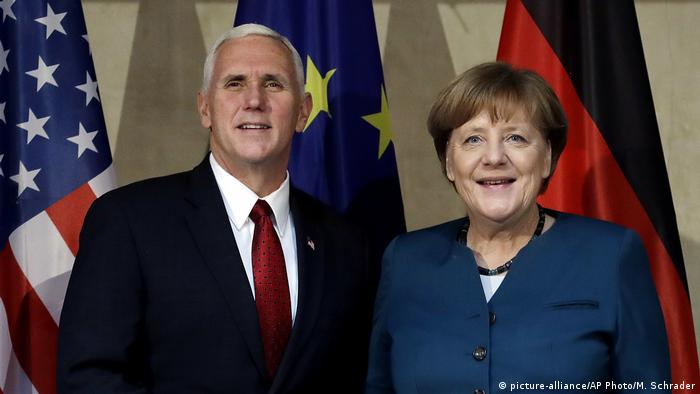 German Chancellor Angela Merkel  on Saturday emphasized the necessity of international alliances, such as NATO, to cope with the challenges currently facing the world.

Speaking on the second day of the Munich Security Conference, Merkel said that problems such as those posed by Islamist terrorism could not be mastered by one nation alone, and called for a "networked world."

At the same time, she said it was necessary to improve and streamline multilateral bodies such as the European Union, while stressing how vital they were.

Among other things, Merkel reiterated European commitment to the NATO defense alliance, saying that Germany would do its best to reach the NATO-mandated defense spending target of 2 percent of gross domestic product (GDP).

However, she emphasized that NATO was in the interest not only of Europe, but of the United States as well.

Merkel's speech was followed by one from US Vice President Mike Pence, who, while assuring Europe of Washington's continued commitment to NATO, reiterated calls for all members of the alliance to contribute their "fair share."

"The time has come to do more" in face of the variety of military challenges facing the world, Pence said, adding that apart from the US and four other members, no country had yet met the 2-percent target.

The US vice president said that his country was planning to make itself militarily "stronger than ever before."

Among the challenges faced by NATO, Pence mentioned the situation in the east of Europe, where he said Russia was trying to "redraw international borders." He said the US would continue to "hold Russia accountable," while still trying to find "common ground."

US commitment to NATO has been called into question by US President Donald Trump, who has been known to describe the alliance as "obsolete," although more recent comments seem aimed at reassuring European partners.

"Let no one doubt our commitment," Pence said on Saturday.

Merkel's spokesman Steffen Seibert said the focus of the meeting had been the "close and friendly bilateral relations" between Germany and the US. He said Merkel and Pence also touched on the conflicts in Ukraine and Syria, and the situation in Afghanistan and Libya.

Germany's Foreign Minister Sigmar Gabriel was slightly more skeptical of the US-driven focus on defense spending, however. Speaking to the press at the conference, Gabriel stressed that there was more to achieving peace than increasing military budgets.

NATO countries should not see the new administration in Washington as a "blessing to engage in a cycle of arms upgrading," said Gabriel. In an earlier interview, he said that fighting social ills like poverty was more likely to having a lasting effect on world peace than building bigger, better armies.

UN Secretary-General Antonio Guterres, NATO Secretary-General Jens Stoltenberg and Russian Foreign Minister Sergey Lavrov also spoke on Saturday morning. Lavrov is also among those invited to a Ukraine crisis meeting on the sidelines of the Munich conference, which is also to be attended by the other members of the so-called "Normandy format" - the foreign ministers from Germany, Ukraine and France.

In the afternoon, opponents of the Munich Security Conference have called a protest that is expected to draw up to 4,000 demonstrators.

There are also to be discussions of terrorism and radical extremism. New US Secretary of  Homeland Security John Kelly is scheduled to be one of the speakers.

Von der Leyen kicked off the international security meeting by calling for a more globally committed United States. The US Defense Secretary affirmed the importance of Europe to the US and praised German troops. (17.02.2017)