With the rise of populism threatening the international order, the report warns of an "illiberal moment" globally. A withdrawal of the US on the world stage could allow others to take advantage of the power vacuum. 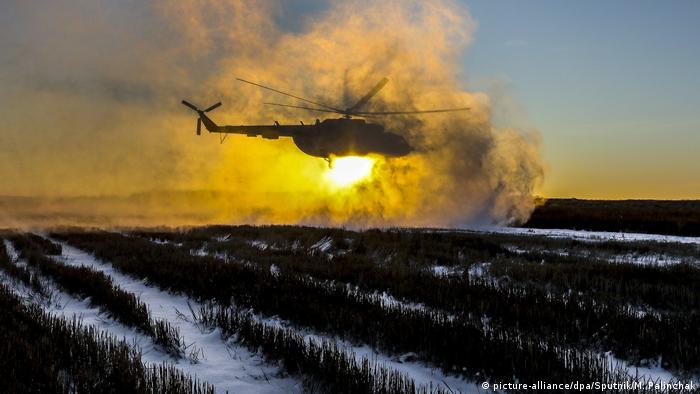 Chancellor Angela Merkel is to meet US Vice President Mike Pence next week, when she attends the Munich Security Conference. It will be the first time she meets any senior member of the new Washington administration.

The Munich Security Conference (MSC) published its annual report on Monday, with the conference chairman saying there was greater instability today across the globe than there has been since the Second World War.

From a power vacuum caused by a possible US withdrawal from the global stage to the heightened threat of military escalation, the report entitled "Post-Truth, Post-West, Post-Order?" accentuates the threats to the international order in what MSC Chairman Wolfgang Ischinger described as an "illiberal moment."

"The international security environment is arguably more volatile today than at any point since World War II. Some of the most fundamental pillars of the West and of the liberal international order are weakening," said the MSC chairman, Ambassador Wolfgang Ischinger.

"We may, then, be on the brink of a post-Western age, one in which non-Western actors are shaping international affairs, often in parallel or even to the detriment of precisely those multilateral frameworks that have formed the bedrock of the liberal international order since 1945," Ischinger said. "Are we entering a post-order world?"

Notably in the report, the ascendancy of populist rhetoric from positions of power has fundamentally shifted the discourse of liberal democracy and the principles that accompany it.

If Brexit, the British referendum on leaving the EU, was the catalyst for a revision of international relations, the election of US President Donald Trump marked its assured advancement.

In his inauguration speech, Trump professed a historical change in US relations with other countries, promising that his policies - both domestic and foreign - will prioritize American interests.

"We've made other countries rich while the wealth, strength, and confidence of our country has disappeared over the horizon … But that is the past. And now we are looking only to the future, Trump said during his inauguration speech. "From this moment on, it's going to be America first."

However, as the report points out, Trump failed to mention "democracy, liberty or human rights" in his inaugural address to the nation, marking a sharp contrast to his predecessors. "This does not bode well for liberal values around the world," the report said.

Since then, Trump's administration has promoted a momentous rebalancing of the global order through a myriad of policy maneuvers, including circumventing long-held diplomatic traditions, insidious criticism of America's traditional allies and barring citizens of seven Muslim-majority nations from entering the country.

'Nothing is true and everything is possible'

Despite its deployment in eastern European nations after Russia's illegal annexation of Crimea, interest in "fake news" witnessed a fever-pitch in the wake of Trump's electoral victory in November.

Disinformation and its ability to influence political structures and undermine traditional media narratives has proven to be a post-truth feature of a political environment created by an interconnected voter base, and one that has consequential repercussions on security.

"The main threat is that citizens' trust in media and politicians might further erode, creating a vicious cycle that threatens liberal democracy," the report said.

"Yet, they [states] cannot forbid 'fake news' or introduce 'truth agencies' lest they turn illiberal themselves. Preventing a 'post-truth' world, in which 'nothing is true and everything is possible,' is a task for society as a whole," it added, referring to lawmakers' attempts to criminalize the production and distribution of disinformation.

Syria: No end in sight

Since the onset of the Syrian conflict in 2011, more than 300,000 people have been killed and half the population displaced, according to UN figures.

Despite numerous attempts to secure a nationwide ceasefire and prevent the escalation of hostilities, the past year saw the Syrian army launch a brutal campaign, backed by Russia, to reclaim the city of Aleppo, leaving thousands dead in the process.

"Key Western actors stood by as Aleppo fell, watching what a UN spokesperson described as a 'complete meltdown of humanity,'" the report said.

What started off as protests calling for Syrian President Bashar al-Assad to step down has transformed into a protracted conflict involving domestic actors, militant groups, neighboring states and world powers, including the US, Russia, Iran and Saudi Arabia.

"As numerous actors are meddling in the crises in Syria and the region, while the West attempts to somehow muddle through, the Middle East's post-Western age might have already begun," the report said.

The future of terrorism

In the past year, security vulnerabilities spawned by the Syrian conflict have metastasized throughout the region and the globe, most notably the proliferation of "Islamic State"-inspired terrorist attacks in Western nations.

From a state of emergency in France to raids in Germany, Europe's response in the wake of attacks in Berlin, Nice and Brussels has been uneven across the bloc as individual member states developed ways to enhance precautionary measures to counter threats.

According to the report, it is necessary for the EU to cooperate as a unified bloc on a range of challenges posed by the threat of radicalization and terrorism.

"Only by further stepping up EU anti-terror cooperation and capabilities will European states be able to rise to what will likely be a long-term jihadist challenge," the report said.

"Main reasons for this include the growing potential recruitment pool in Europe; more jihadist entrepreneurs and local network builders, including an increasingly strong crime-terror nexus; the ongoing conflicts in the Muslim world, which can be used for recruitment and propaganda; and the clandestine communication opportunities the Internet provides," it added.

The Munich Security Report offers a glimpse into the challenges that threaten to upend the international order established in the aftermath of World War II, which left millions killed and displaced across the globe.

Whether questioning the existence of the North Atlantic Treaty Organization (NATO) in its current form or forsaking traditional alliances for new ones, the current state of affairs has shifted global and regional dynamics between nation states.

But the report, published ahead of the Munich Security Conference, offers world leaders a starting point for dialogue on the world's most pertinent security and defense challenges.

"I hope that we will not mince words and speak honestly about our disagreements as well as about our common interests and values," Ischinger said earlier this month.

Colors are key when it comes to distinguishing a brand. They may be bright, cheerful and reminiscent of childhood, but they can also be the source of conflicts. Countless businesses have fought over a number of hues. (21.07.2016)

Several times over the past 18 months, police have managed to thwart terror attacks and plots in Germany, which has clearly become a target for Islamic militants in Europe. The following made the headlines: (04.11.2016)